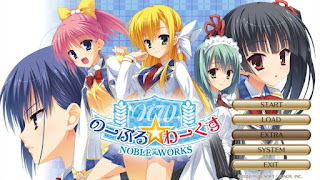 I haven't had the greatest of luck with visual novels so far. Most of the ones I've tried have either been way pervier than I had expected or simply weren't very good due to short lengths and/or limited routes. I was determined this wouldn't happen again so this time sought out a highly-acclaimed VN that I could spend some time getting stuck into. One I saw mentioned a lot was Noble Works, released a few years ago in translated form. In a shocking twist from the norm, it sees you take on the role of a schoolboy, in this case Fujishima Takumi. As seems to be common in manga/anime, despite being of school age he lives on his own for one reason or another, and struggles to hold down part-time jobs in order to make ends meet. BUT THEN!! Fate decides to intervene.

While out looking for a new job he finds himself being chased by some hoodlums for unknown reasons. He legs it anyway and runs straight into another guy who looks exactly like him. GASP! Of course, this other guy, Kanemoto Shuri, is the real target of the hoodlums who are trying to kidnap him, but since in addition to this Shuri is also seriously ill, his wealthy family hire Takumi to double for him while he's stuck in hospital. The threat of being kidnapped isn't appealing but Takumi needs the money, and so he steps into Shuri's shoes. He moves into the big fancy house Shuri usually shares with his older sister and two maids and takes his place at the prestigious Rokuroku Academy as well. The only people who know are Shuri himself, his father, sister, and the two maids. Now he just has to convince everyone at school.

Luckily, as we discover with Takumi upon his start at the school, Shuri apparently didn't have many close friendships or relationships with students or teachers so it isn't too hard to take his place to begin with. He quickly makes some friends himself (as Shuri, of course). These include the reserved Maya (blue hair), the outgoing Makoto (maroon hair), token male friend Kotetsu (who worships Maya), the snobby Shizuru (black hair), and the upbeat Hinata (pink hair) who is the only one Takumi knew before all this Shuri business. On top of those, Shuri's sister, the somewhat bitchy (are you allowed to say that these days?) Akari (yellow hair) also attends the school, as does one of the maids from the house, the sweet and polite Sena (green hair), who is Akari's 'personal attendant' and long-time friend.

The only other major character is the other maid, Chiaki, who rarely leaves the house (in the context of the game, at least), and indeed, a majority of the game takes place either at the house or the school, both of which primarily feature female characters. This, if you hadn't guessed, makes it a harem-based romantic VN, but there are plenty of comedic and dramatic moments too. There are routes for Akari, Sena, Hinata, Maya, and Shizuru, but curiously there isn't one for either Makoto or Chiaki. This is particularly surprising regarding the former as her character often hints at being sexually adventurous. There's even a short route enabling you to get it on with your homeroom teacher, so why not Makoto? Oh well, there's still a good variety of girlies you can go for, each with distinctive personalities.

They all have their own backstories and various things going on with them too, and all routes but one are pretty long and have a lot of unique content. They start on September 7th and finish some time during November or December depending on which character. The odd day is skipped here and there but it still takes a good while to go through an entire route, never mind all of them. I didn't count how long I played it for but there's 30-50 hours worth here overall, according to the VNDB (visual novel database). I suppose that's dependent on how quickly you click through the dialogue of which there is a lot, but either way it's a dramatic improvement on the last two VN's I played. Then again, everything here is an improvement over them.

Visually this is probably the best VN I've yet played. The artwork is excellent - just the style I like, with quite a few locations as well, and a decent amount of CG's. I'm not necessarily referring to the pervy ones, incidentally, but on that subject, there are of course some pervy scenarios, or 'h-scenes' as I believe they're called. The genital regions of both sexes are censored but there are underwear and boobs here and there, and it does veer into full-in hentai territory at the end of each scene by giving you the choice of 'finishing' either 'inside' or 'outside'. It's still far from the perviest VN I've played though (I don't even seek them out!), and all but one of the scenes (teacher) are at least within the confines of a romantic relationship, even if they are typically unrealistic in terms of performance and content.

Some of the sex-talk is a little over the top too, but the rest of the dialogue is pretty good overall. The translation seems to be top-notch and, as mentioned, there's a nice mixture of comedic and dramatic moments. Likewise, the Japanese voice acting is of a high standard and is, as always, far preferable to having new voice tracks which would no doubt have been ultra-American. The music isn't bad either and includes a suitably fancy title screen tune and numerous other catchy pieces to suit particular moods or locations. All technical aspects of the game are satisfactory at the very least actually - even the simple-yet-comprehensive menus and in-game interface. In my admittedly-limited experience, however, games like this are made or broken on the strength of two things - story/stories and characters.

Happily, both these aspects of the game are also at least satisfactory. The characters are quite a diverse bunch and are mostly all appealing, and of course, the main story plays out differently depending on whose route you take, as well as them all having their own drama/subplots going on to one degree or another. The game's main story (Takumi doubling for Shuri) is a pretty good one too, offering much potential for humour and drama itself, as you might imagine. There's nothing earth-shattering in scope here - it is still a high-school-set game don't forget - but it's enough to keep you entertained throughout the game's considerable length. Unless you're turned off by cartoon sex of course, it might be a bit much then, but the appealing visuals, story, characters and mixture of humour and drama make it well worth a try for anyone else. Quite comfortably the best visual novel I've yet played.

Gameplay Trailer: This is about the only trailer I could find for the game which does accentuate its pervier moments, unsurprisingly, but that type of content isn't as common as this makes it seem!