If I review any PCE shmups in my upcoming feature that get really high scores, they don't appear in this Top Five because I hadn't played them before! (a.k.a covering my arse!) 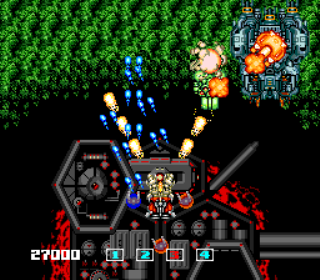 Developed by Irem soon after they unleashed R-Type, this fantastic vertical scroller is for some bizarre reason far less revered than its sibling, which is odd because even a quick session with it reveals Irem were more than adept at this kind of shmup as well as the horizontal variety. Okay, I guess it's not quite as innovative or distinctive as R-Type, and it's not the flashiest shooter ever either. The graphics aren't particularly impressive and the music is instantly forgettable, but it is challenging, well designed, and, much like R-Type, features some interesting power-ups. Rather than the now-legendary Force from that game, here it's possible to attach a variety of devices to the front of your ship, each of which give it a different weapon. A top blaster which deserves more recognition. 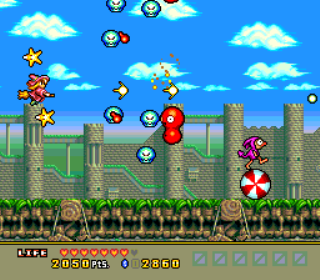 For a long time an Engine exclusive, this horizontal-scroller is so charming it's as if you've had a spell cast on you by the 'Star Maiden' protagonist of the game! It's a horizontal-scroller in a similar vein to Cotton (which was released around the same time) which sees you in control of a witch complete with broomstick (but apparently no black cat) battling six demons and their bizarre minions across the same number of stages! Magical Chase is a very strange experience, much like its better-known contemporary, but it's a compelling and highly playable little game which looks fabulous, with well-detailed graphics which are full of character, and it has a fantastic soundtrack too. A unique horizontal-scroller which constantly beckons you to discover what lies around the next corner. 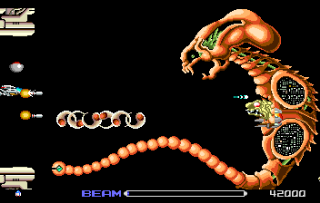 This famous game is often heralded as the greatest shoot 'em up ever. I'm not sure I'd agree with that but one thing's for sure - until the PlayStation came along, this Engine version remained the most faithful conversion yet seen (lord knows why it never appeared on the MD, come to think of it, that could've been a cracking version). Despite the fact that it was initially spread over two separately released Hu-Cards, it was still hard to fault it. The graphics and music are near-faultless and about as close to arcade perfect as anyone could reasonably expect, and the timeless level design and gameplay is faithfully recreated. This was a God-send for the game's many fans. Whatever esteem you hold this eternally worshipped game in, there's no question that it's all-time classic, and this is a top-notch version of it. 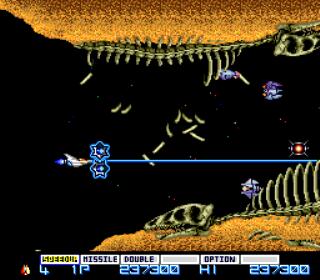 As is the case with R-Type, this was arguably the best version of Gradius until the arrival of the 32-bit consoles (although the X68000 effort was also superb). While it's true that the graphics are fairly simplistic and do suffer from bouts of slowdown now and then, they are also beautifully defined and the twinkly, multi-coloured stars in the background are hypnotic! The remixed soundtrack here is fantastic too and is among my favourite shmup soundtracks on any system, but it's the finely-honed gameplay that keeps me coming back. Challenging it may be, but the difficulty curve is well pitched and it's packed with so many distinctive touches that it'll take ages to see all it has to offer, and is enjoyable enough to want to. They even managed to squeeze in an extra level! 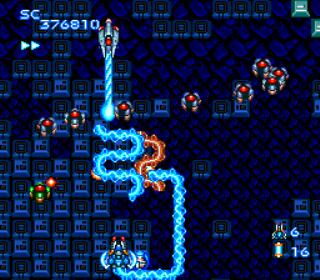 It's amazing to think that this was one of the first shmups released on the Engine. After all these years it's still one of the finest vertical-scrollers I've played on any system. It's true that there's a vast number that I've still not played but that doesn't detract from the sheer quality of this classic from Hudson. It eases you in with the gentle opening stage before gradually ramping up the intensity to sweaty-palms, edge-of-the-seat levels - this really is a game that oozes quality in every department. It's packed with detailed and varied graphics, superb music, and interesting stages, so it's easy to see why it was revered in its day, and it hasn't aged a bit either. Given the Engine's prowess with this genre, it's possible I may encounter an even better shmup at some point but it'll have to be something really special to beat this legendary game.
Posted by RetroKingSimon at 20:00