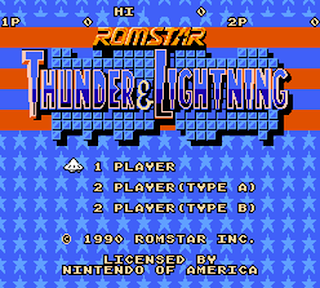 You would think after the immense success of Arkanoid that many of the clones that followed would also meet with some degree of fame and fortune too, especially if they were any good, but this release by Visco went largely unnoticed. This is even stranger when you realise it first appeared in arcades - the birthplace of most popular games of the day, and was also ported to the NES - the most popular console of the time. Perhaps it stank of poop? Many clones were tremendously generic and highly uninspiring to play after all. After just a few minutes playing Thunder and Lightning, though, that definitely didn't seem to be the case here. Impressions of Romstar's NES conversion were initially very positive - it's bright and colourful, the presentation is nice, and my time spent with it was enjoyable, but I couldn't shake the feeling that it was going to suddenly start sucking hard and I would then come to understand the reason for its apparent anonymity. 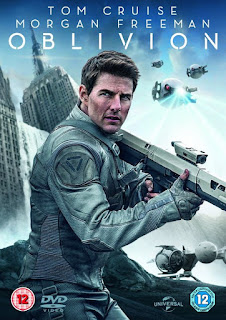 Tagline: "Earth is a memory worth fighting for."

Earth is dying. That's the bleak message we are given by Commander Jack Harper (Cruise) at the opening of this adaptation of Joseph Kosinski's unpublished graphic novel. It's set in 2077, around 50 years after a devastating war with the invading Scavengers (or Scavs), an alien race forced to leave their own world and who are now keen to exploit the resources of our precious home. It wasn't a direct invasion at first though. The Scavs first blew up our moon which threw the world into chaos. Enormous earthquakes struck within hours and huge tsunamis took care of much that remained. Then came the invasion. We fought back. We used the nukes, and eventually defeated the Scavs, but earth was left a poisoned ruin and most of her population gone. The survivors relocated to Titan with just a handful remaining behind to oversee the massive fusion generators which are slowly draining the oceans to produce energy for the colonists.

Read more »
Posted by RetroKingSimon at 12:31 No comments: 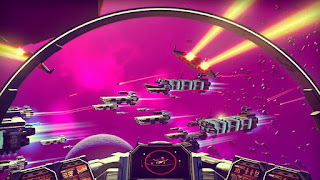 Given my apparent natural lethargy and general lack of urgency, the E3 fair isn't something I usually pay a massive amount of attention to. Sure, the more popular news items usually end up finding me anyway, some of which I find interesting, others I do not, but there is one game that's been featured in the last two events that I'm desperate to play, and that, as you might've guessed, is No Man's Sky. It's an indie title by a small British studio based in Guildford (which isn't far from me actually!), but the fact that it's been featured in two annual shows (and counting) should tell you that it's a little more ambitious than most indie releases. In fact, it's so ambitious, many believed it couldn't even be realised.

The number '68000' is probably one that means a lot to many retro gamers. It is after all the designation of the processor made by Motorola that's found in many fine 16-bit systems such as the Atari ST, Commodore Amiga, Sega MegaDrive, and SNK's mighty Neo Geo, but there are also a few lesser-known systems powered by it as well. One of them is the Super A'Can which is made by a company called Funtech.

It's not tremendously surprising if you haven't heard of Funtech as they're a Taiwanese company who were responsible for little of note prior to entering the gaming world, and accordingly, their strangely-named system was released only in their native territory. A strange decision, you might think - gaining a foothold in the console hardware market has always been extremely tough for a newcomer to begin with, never mind if said newcomer restricts themselves to such a limited audience. How in the blue blazes did they ever expect to attract any big name publishers to their system? It was also released rather late for a cartridge-based, 68000-powered system - 1995, no less - by which time the PlayStation and Saturn were striding forth, laying waste to all such systems with their fancy 3D graphics and CD-ROM games. It didn't stand a chance did it? I'd say not and indeed, it wasn't with us for long. 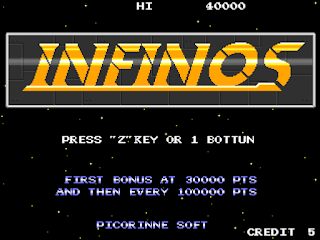 It must've been some two or three years ago now that this game was first brought to my attention. Lord only knows why it's taken me so long to take a look at it but finally I have, and found... that I should have done so much earlier! I have been able to discover little of its background, largely because it was released only in Japan and all accompanying info is accordingly in corrupted kanji, but I suspect the story involves the usual invasion of horrifyingly evil aliens and resultant lone hero setting out to vanquish them, etc. What I can tell you for sure is that it's a horizontal-scroller and that Irem's classic, legendary R-Type was clearly the main inspiration behind it. I'm not sure anyone could blame the talented fellow (or fellows) of Picorinne Soft for holding said game in such high esteem though.

Read more »
Posted by RetroKingSimon at 09:05 No comments: 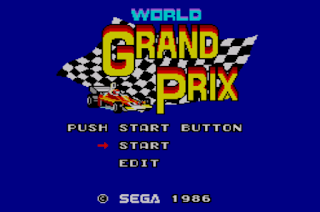 The poor old Master System wasn't really blessed with a tremendous number of quality racing games so it remains a mystery to me why I never got around to buying World Grand Prix back in its day. It did look very similar to Hang-On after all, which was released the previous year, and I loved that fun little racer, so I should love WGP too, in theory at least. Sadly, due my own idiocy, it took many years to test that theory, but when I did finally play it I found that it is indeed a very similar game to Sega's famous motor-cycle racer. Both place you in control of a nameless driver whom you must guide around a series of courses in his/her respective vehicle with the object of simply reaching the end before your time runs out. Sounds easy enough.

Read more »
Posted by RetroKingSimon at 10:28 No comments: