As much as I love arcade games, and a good few of my fondest childhood/teenage memories are of amusement arcades, there's no way in the world I'll ever have time to cover all arcade games ever made. That would be ultra-unrealistic, even for my standards. Therefore, for these listings I will try to feature most of the main games as well as some less well-known titles, including a few Japan-only games that aren't too language-heavy, but I will obviously miss a lot too.

Left out on purpose will be the scores of Japanese mahjong games and anything similar. Also, while I've played a lot of arcade games in person, it's not very realistic to expect me to have played all of them in their native environment. Games for this list will therefore be mostly played via emulation, so I will also be leaving out games I can't get running on an emulator, and also ones that can't realistically be played (such as ones that need a machine-specific control method).

That will still leave hundreds, probably thousands of games for me to cover here though, so I'd better get started. Next up is:

I am lucky enough to have played this one for real but it's not common, perhaps due to its size. It's a Model 3-powered light gun game pitting you against all the terrors of the deep and more besides - basically House of the Dead but underwater - and the cab comes equipped with a big screen and two mounted guns.

Read more »
Posted by RetroKingSimon at 19:08 No comments: 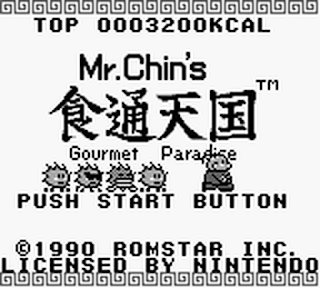 In the days of yore, I often found that games that had anything to do with food were pretty great. Perhaps not as great as a really hot curry or a meat feast pizza but pretty great. This particular example is, I believe, a little-known Game Boy release which casts the player as the titular Mr. Chin, apparently a Chinese gentleman who has "come all the way from China" in pursuit of his favourite treat - luscious gourmet peaches. Where he's come to is anybody's guess but, while this mysterious land may be rich in curvy peach goodness, getting his hands on them may not be quite as simple as all that. Most of them, it seems, are actually terrifying creatures known as Momos which are apparently a special branch of the fruit family, and they aren't quite ready to be turned into peaches. Luckily, our hungry Chinese friend does have one fairly effective way of doing this - zapping them with his 'Demoe Beam' - but even this can be a little tricky too.

Read more »
Posted by RetroKingSimon at 18:20 No comments:

Although she didn't really even get started until her 30's, the lovely Julianne Moore has nonetheless cemented her status since then as one of the finest actresses of her generation. Unlike many of her contemporaries, she continues to score lead roles into her 50's and (soon to be) beyond, and continues to be comfortable playing 'sexy older woman' type roles as well as the 'emotionally troubled women' she is perhaps best known for. She has been one of my favourite actresses since I first saw her in The Lost World and Boogie Nights back in 1997, and I continue to seek out her films to this day. Here is a selection of some of the ones I've watched recently: 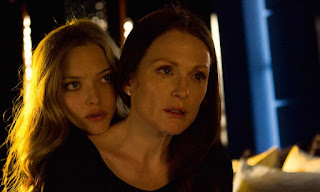 The oldest film in this round-up is this one which casts Ms. Moore as Catherine, an increasingly age-conscious wife who has begun to suspect her husband David (Liam Neeson) may be cheating. In an effort to confirm/quell her fears, she hires a young call girl she has observed from her office window who calls herself Chloe (Amanda Seyfried), and asks her to try and seduce David and report back. I expect you can guess how this goes, but it quickly becomes clear that Chloe prefers spending time with Catherine over David. Unfortunately, her interest seems abrupt and is never really explained which just makes it seem weird rather than compelling. Both lead performances are decent enough, particularly Moore as the conflicted Catherine, but the plot is too vexing to really be enjoyable. It's worth watching if you've ever wanted to see Moore or Seyfried getting down to some good old HLA, but it will most likely prove too bewildering otherwise... 5/10

Read more »
Posted by RetroKingSimon at 19:01 No comments: 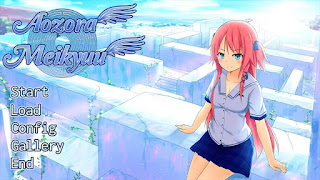 After the thorough disappointment of the last visual novel I tried, I didn't have a huge amount of hope that the next one I tried would be much cop either, but this is the one I went for. The protagonist is Aoi Takamatsu, a young man who has dropped out of school and become a shut-in, spending much of his time playing dating sims and VN's probably not too dissimilar to this one. The reason for this dramatic change was the devastating blow of rejection upon confessing his love to his high-school crush. Now he has sworn off love, and indeed personal relationships of any kind, preferring instead to isolate himself and live through his computer. Naturally, however, someone has just quite literally dropped into his life unannounced, giving him a chance to reevaluate his priorities.

Read more »
Posted by RetroKingSimon at 18:26 No comments:

As most gamers in my neck of the woods will probably agree, the PC Engine was an instant legend from the moment it appeared - nothing had ever been more desirable, not even Counsellor Troi from Star Trek The Next Generation (possibly). But alas, it never saw a proper release in our humble territory. Worsening the despair felt by us considerably was the announcement and subsequent release of the CD-ROM unit for the same console a year-or-so later, which made NEC's box of tricks even more desirable. How could it not? It was a CD-ROM... for a games console!

Like the Engine itself, images of the CD-ROM unit began appearing in the mighty C&VG magazine during 1988, and more so upon its release late that year. Technology such as this was still very new at the time and thus had a rather futuristic air about it. What sort of wonders could be in store for lucky Engine gamers? Well, first they would have to pay the hefty sum to import one from Japan (unless they lived in Japan), and this sum was often significantly more than that of the Engine itself at first. Oof! Not many gamers in Europe could even afford to import the PCE itself, never mind its expensive 'other half', but there were a lucky few with sizeable bank balances (or parents with sizeable bank balances, at least) who instantly earned mythical status by owning this dream duo.