Tagline: "The system failed. She won't."

Meet Riley North. She's a middle-aged banker from Los Angeles where she lives with husband Chris (Hephner) and 10-year old daughter Carly. They aren't doing terribly well financially, but they're getting by. For their daughter's birthday they take her to a local carnival. In the midst of this family evening out, however, a drive-by shooting results in the tragic death of Chris and Carly. The injured Riley is able to identify the shooters but they escape justice due to their connections and the corrupt officials handling the trial. Incredulous, devastated, enraged, she is taken away, then disappears. When she returns five years later, however, certain members of the criminal underworld and law-enforcement community formerly involved with her case begin meeting brutal ends. Is isn't too long before the rozzers start remembering stuff and recognise a pattern, but can they do anything about it? Or given the type of people getting killed, will they do anything about it?

Read more »
Posted by RetroKingSimon at 19:12 No comments:

There are so many superb looking indie games around these days it's hard to keep track. The latest one to catch my eye is Savior (known previously as Into the Rift) which is currently being developed by Starsoft, a small studio made up of veterans of both the game and movie industries. It's a 2D side-scroller and is being touted as an 'open world platformer', and while it clearly takes influence from several genres, there does seem to be an extensive amount of platforming. Splendidly, this isn't just bog-standard running/jumping action either - one of the numerous notable things about the game is the main character's parkour-inspired movements, as can be seen in the pics and trailer here. Look as she flips and leaps all over the place, dodging enemies and scaling the terrain! 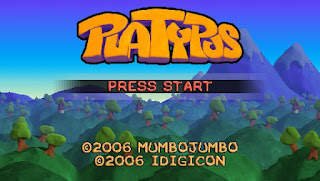 It has been a while since I looked at a PSP game here (seven years, apparently - jeepers!), so to mark my return I thought I'd take a look at this eye-catching (and rather strangely-named) title by Anthony Flack, an indie game designer from New Zealand. One might assume from its name that it's a curious platformer or maybe a puzzle game or something like that, but no, it's actually a horizontal shmup set in a lovely peaceful land known as Mungola. Sadly, the loveliness of this country is being threatened by those pesky oafs from the neighbouring Colossatropolis which has become so overcrowded that its people have begun taking over Mungola, destroying the peace, using up precious resources, and probably leaving their rubbish all over the place too.

Read more »
Posted by RetroKingSimon at 16:17 No comments:

I suspect many others shared my appreciation of fighting films while growing up in the 80's, with classics like Bloodsport and Best of the Best to watch repeatedly, but I guess I kind of grew out of them. Not so long ago though, I happened upon a YouTube clip of some guy performing all sorts of crazy flippy spinny jumps and kicks on various hapless opponents. I soon identified him and the film in question and had to watch it. It turned out it was part of a series though, so I figured I might as well watch all of them and report back here with my largely inconsequential verdict! 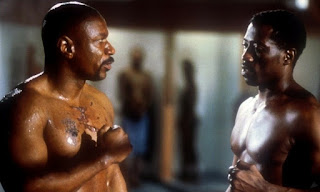 The story in this original film in the series is centred around George 'Iceman' Chambers (Ving Rhames), the undisputed world heavyweight boxing champion who is sent down for rape and ends up in supermax. Of course, it turns out the prison holds its own boxing matches and has its own 'undisputed' champion in Monroe Hutchens (Wesley Snipes). Astonishingly, the betting syndicate that oversees the fights there are keen to see the two champs go head-to-head. The pompous and cocky Chambers is also eager to assert his dominance, and after a few snags (like Monroe ending up in the SHU) the fight is confirmed, with arrangements handled by ageing mob boss Ripstein (Peter Falk). There isn't really much here that's going to surprise you though. The premise is pretty good but there is basically only two proper fights in the film, and while both Rhames and Snipes look reasonably proficient in them (to my inexperienced eyes at least), that means you'll spend most of your time with the generic characters and bland script. I guess it's not too bad for what it is but don't go expecting a knockout (chortle!)... 5/10

Read more »
Posted by RetroKingSimon at 15:45 No comments:

The Nintendo 64 isn't the most respected system in retro gaming circles - mainly, I suspect, due to its shortage of 2D titles, not to mention its reputation among the more snobby elitist gamers as little more than a kids toy (something I looked at here a few years back). I've always liked the N64 though, and I know a good few others still do too, so for the benefit of us, here's what will most likely be good news!

Gamers who are either unwilling or unable to have a bulky CRT TV front and centre of their collection have long been burdened with an unsatisfactory picture quality when using their old consoles on modern TV/monitor screens, and as its critics seem overjoyed in pointing out, the N64 was often blighted by rather 'fuzzy' graphics to begin with. However, help is at hand, for N64 fans at least, thanks to Eon, a company previously responsible for a GameCube HDMI adaptor called GCHD. Now they have announced the Super 64, a similar plug-and-play adaptor for the GC's predecessor. It's due for release on July 22nd and will allow N64 owners to play their games on HDMI displays in lagless 480p - the highest quality possible using the system's native hardware, and twice its original resolution.