I've been watching films for many years now - since my early teens in fact (as far as I remember at least) - and I'm confident in saying there's at least one example from every genre that I like. Usually far more than one of course, but there are a few genres I'm not particularly keen on. One of them is horror. I can appreciate that they hold a certain appeal for many but I just don't find most of them very interesting. I did recently, however, watch a handful of supposedly-good examples to see if my mind could be changed. For one reason or another, here are the ones I went for: 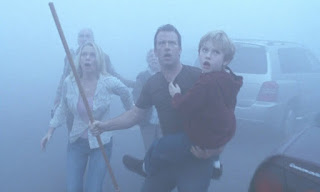 It was an interest in watching this particular film that prompted this post to begin with. I didn't know too much about it except that it's a Stephen King adaptation. Well, and that it presumably featured mist too, and it does indeed, with the murky stuff wafting over a small American town the morning after a large thunderstorm. While getting supplies from a local store with his son, David (Thomas Jane) encounters a panicked and injured man running into the store warning of 'something' in the mist that now surrounds the store and extends an unknown distance beyond. So, stay indoors then, and that's what the rest of them do - barricade themselves in the store while scary creatures try to get them. Scary they are too, Lovecraftian in style and ranging from bird-sized flying bugs to huge monsters, but the emphasis is just as much on the people in the store and how they deal with the crisis - and each other. Conflicts unsurprisingly arise as their situation looks increasingly bleak, mainly thanks to a super annoying religious fanatic, and we get perhaps one of the most shocking endings of any film (a change from the novel by director, Frank Darabont). Occasionally gruesome, occasionally boring, but mostly gripping... 8/10

Read more »
Posted by RetroKingSimon at 23:55 No comments:

This could be down to the fact that the list contains many of the biggest, brightest, and best-known (and therefore most popular) objects to be found. Indeed, many of us will have grown up seeing or hearing about a lot of them, myself included, without ever knowing what they are or even what they're called. There are 110 objects in Messier's catalogue too, which means simpletons like me often forget about some or get others mixed up, so I figured it might be worth listing them here. The first such post is therefore thus. The pics should all be 1200x900, hope you like them :)

I'm not sure if systems having their own gaming mascot has ever really been that big a thing outside of the world of Sega/Nintendo and their rivalry but when I was young I always used to consider Monty Mole as the Speccy's unofficial mascot. Some might go for Miner Willy over Monty but the latter had more games and I was for some reason much more familiar with him at the time, so I went for him even if some of his games did appear on rival systems. He was created by Peter Harrap, at the time a 'fresh face to Spectrum programming', and Wanted: Monty Mole, sometimes just known as Monty Mole, was his first adventure. From the title I had assumed he was some sort of cat (or mole) burglar on the run but no, apparently he's just looking to snaffle some coal from the local mine for the 'bone chilling Christmas ahead'. No one wants to see him frozen solid so let's grab that coal bucket and get collecting!