Despite being released soon after its MegaDrive big brother, and that I still owned my Master System at the time, for some reason I gave this port of the instantly-famous MD platformer a wide berth. Harsh in retrospect perhaps, but in those days flashy audio/visuals were as captivating as they have always been, before and since, so who could blame me for being taken in by the dazzling tour-de-force that was Sonic the Hedgehog MD? But yes, I still should've come back for this highly-rated version many moons ago, so I come before it now, humbled, and much less influenced by the flashy technical abilities of one system over another. I guess more than that stuff, though, the big question will be: can it possibly be as slick, stylish, and simply as much fun as that legendary MD version?

Developed years earlier by former Amiga designers who by then worked for American developer Epyx, the 16-bit Lynx was much more powerful than Nintendo's Game Boy, but that extra power and its colour screen came at a cost. It has some corking games though, and this listing will include all official releases. This is one of four parts and features all games beginning with letters O through R:

Namco's pill-popping yellow pie-chart has received many sequels to his 1980 classic, and this is probably the best-loved of them all. Giving him arms and legs (and a hat) was a no-brainer and the platformer that he was given to run and jump through was a cracker. Happily, this Lynx version is nearly as good too.

I don't think there has ever been a time in human history when ninjas haven't been cool (except as far as anything to do with Google is concerned, of course) but their heyday, at least as far as films and videogames and stuff are concerned, was definitely the 80's. Perhaps in an attempt to renew their popularity, however, a small American studio called Nu Image conjured up this direct-to-video effort. It features Scott Adkins in one of his first lead roles as Casey Bowman, an American orphan who was adopted into a martial arts dojo in Japan. While there he adopts the way of bushido and earns the respect of his sensei, Master Takeda (Igawa). His dedication does not, however, earn the respect of the dojo's top student Masazuka (Ihara), who is jealous of the attention Casey receives from Takeda, and also from his hottie daughter Namiko (Hijii). And where jealousy exists, conflict is rarely far behind.

There have been a number of attempts in recent years to launch new formats. Most of these sensibly don't try to take on the might of Sony, Microsoft, and Nintendo, but instead devise more humble systems dealing primarily with indie and homebrew titles. These are about the only modern games I like so I often take an interest in these formats/services, but they don't usually last long, sadly.

However, the latest example I've found is an interesting one. It's called PICO-8 and is described by its creators as a 'fantasy console'. That doesn't mean it only exists in your mind though. According to the blurb on their website, it's "like a regular console, but without the inconvenience of actual hardware". Many gamers, especially ones that collect and/or play retro stuff, are rather fond of physical consoles and games of course, and certainly wouldn't find them an inconvenience, but I get what they mean and it still sounded very intriguing to me. 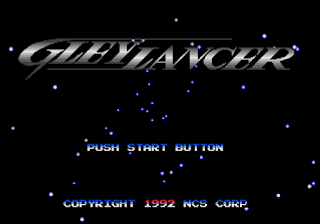 The mighty Mega Drive was a very stonking console for shooter fans as we all know, and happily most of them found a way to Western shores too, but there were a few allegedly decent ones that didn't. The one that always intrigued me the most is probably Gley Lancer. Being the victim of an incorrectly-translated name isn't the most notable thing about it nowadays though. Like many MD games, and indeed like many games generally from the days of retro-ness, it unfortunately now commands such a high price that it's not enormously realistic for normal people to buy it. Of course, no game that changes hands for triple or even quadruple figures among collectors is worth such a sum to a humble gamer. All we want to do is play games, not ogle their sealed cases. Luckily, there a few other avenues available for retroheads and shooter fans, and it is via one of these that I have recently been playing the game for the first time in many moons. 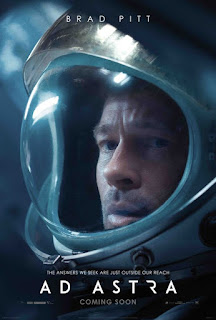 Tagline: "The Answers We Seek Are Just Outside Our Reach"

It's a good time right now to be a sci-fi fan. There are several great TV shows on the go and high-profile films seem to be popping up more regularly than I can last remember. One particular example I've been waiting patiently-but-eagerly for is Ad Astra. It's an original story written by director James Gray along with Ethan Gross and is set in our planet's near future. It's a time when we've developed sufficiently advanced technology, in particular a new propulsion type, to have explored and colonised our solar system, but no further. The existence of alien life is still a question that remains unanswered and one man in particular is obsessed with finding an answer - famed astronaut H. Clifford McBride (Jones) who, 29 years prior to the events of the film, is sent by SpaceCom (U.S. Space Command) to Neptune in command of the Lima Project with the job of finding out if anyone else is out there.

Read more »
Posted by RetroKingSimon at 20:12 No comments:

If anyone still visits here, they may remember a post I made almost exactly a year ago detailing five games my good friend Luke had recommended to me. One of them I already had in my Good Old Games library, a review of which will be arriving soon, but the others all required expenditure on my part. Two of them I still haven't gotten around to buying (hopefully soon!) but there are two I have purchased. And so, it is with medium levels of pleasure I present them to you thus:

Rise of the Tomb Raider by Crystal Dynamics (2016) 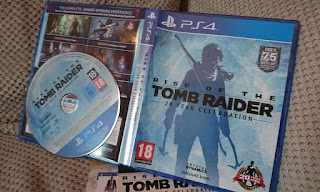 Even though when I spoke to Luke recently he had forgotten which Tomb Raider game he included in his recommendations, it was this one, although it wouldn't have mattered to me much anyway as I haven't played any since the 1996 original! Happily, this one was at a pleasingly low price with Amazon (a mere £15) so I snapped it up pretty sharpish, and was looking forward to giving it a try. When I finally got around to playing it, I unsurprisingly found that the series has moved on somewhat since the original. Lara's boobs are now boob-shaped, and a much more realistic size too, and they move through some spectacular locales along with their owner. Indeed, I was ultra-impressed with the delightful scenery graphics, even if Lara's ass did prove a little distracting, but aside from these wonderful graphics I'm still a bit unsure about the actual game. It seems to be more linear than I had expected, and apparently consists of periods of running in between numerous QTE-type bits. I thought the days of QTE's were long gone! Oh well, it matters not as Boromir might say, it's worth playing anyway for those graphics.