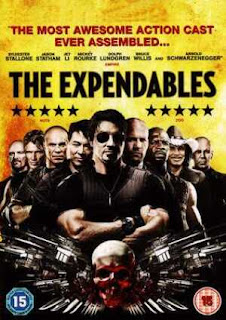 Sly has always been underrated as a director and screenwriter in my opinion. After a storming start to his career, he was one of the biggest stars in the world for well over a decade until he suffered a sizeable lull in his career, ironically occurring post-Cop Land, among his best films and most critically-acclaimed performances. A surprising number of his films saw him work as more than just an actor too. In more recent years, he's returned to prominence with new, 'final' instalments in the franchises that helped make his name, and it was largely thanks to these that he was able to convince the powers that be to give this film the green light. Despite his attempts to branch out into other genres over the years though, it remains those blockbuster action films of the 80's and early 90's that he's most famous for, and his latest project was an elaborate and extremely ambitious homage to those that he and all the other muscular brutes of that era starred in. 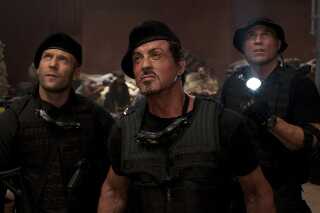 Working as director, co-writer, and star, Sly must've called in every favour he could to assemble this impressive cast, and impressive it is too! He heads the list of course, as well as the team of mercenaries that gives the film its title, and we first meet them in Somalia as they attempt to liberate some hostages from their pirate captors. Headed by leader, Barney Ross (Sly), the team consists of the usual assortment of specialists, complete with comedy names too - Lee Christmas (Statham) is handy with the blades, Yin Yang (Li) is the hand-to-hand combat specialist, Gunnar Jensen (Lundgren) is a sniper, Hale Caesar (Crews) is the weapons expert, and lastly, Toll Road (ex-UFC champion, Couture) is the demolition / explosives guy. 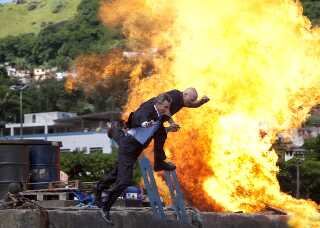 After a disagreement resulting in the expulsion of Gummar, the team returns to New Orleans where they're based. Almost immediately their mission coordinator and former team-mate, Tool (Rourke) tells them about a new, very dangerous but potentially lucrative mission. Ross goes to meet Mr Church (Willis) who's offering the mission to either him or rival, Trent Mauser (Arnie). After learning it involves overthrowing maniacal dictator, General Garza (Zayas), who's occupying an island off South America, Trent declines, so Ross, along with Christmas and Yang, head to the island, called Vilena, to scope it out and meet their contact, Sandra (Itie). It soon becomes apparent that Garza has some help in the shape of ex-CIA agent, James Munroe (Roberts), and hired muscle, Paine ('Stone Cold' Steve Austin). Barely escaping, the team soon returns to finish the job... 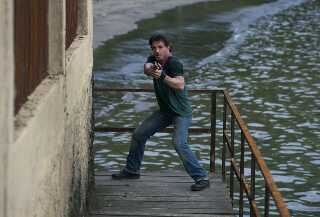 Like most action film 'stories', all of this is pretty inconsequential really though. Like all the best action films of the 80's and 90's, all you need to know is that there's an excuse for the good guys to kick some arse! Though hardly having to flex his acting muscles, Sly is a decent enough team leader here but the real reason to watch is obviously to see if this super-cast equals super-carnage, and that's the main problem really. A collection of action stars like this raises expectations to astronomical heights - can the film really live up to them? And do they all get enough to do? The team itself obviously gets the bulk of the screentime, but most of the star names get at least one 'scene' of their own, and in some cases two stars get the same scene. Ever wondered who would win a fight between wushu master, Jet Li, and hulking man-mountain, Lundgren? Well, take a seat and find out! 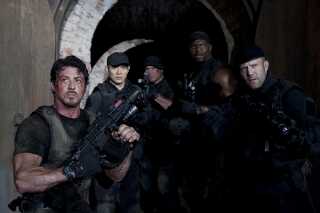 Regardless of anything else though, most people will just take one look at that amazing cast list and decide then and there if they're going to watch The Expendables or not. If, like me, you grew up watching Sly, Arnie, Bruce, Dolph, Li, etc, shoot/kick the crap out of things, there's a very good chance that you will. There is of course a few newer stars involved here too but the action's pretty much as you'll remember it. Is it the ultimate action film? No. There has been better examples, though with less star-power, and there'll probably be more too. There's no amazing acting, the script is pretty iffy, but anyone who decides to watch this will pretty much already know what to expect - guns 'n' explosions, fights 'n' witty one-liners! One thing's for sure... there's not many films like this around anymore. Nostalgic for the 'good old days', or simply want to see what the fuss was all about? Pull up a chair, and keep the ear plugs handy just in case...