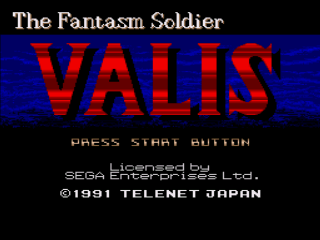 As mentioned in a recent post here at Red Parsley, the Valis games were introduced to most Westerners on the MegaDrive. Unsurprisingly, however, the series has its roots in Japan with the first game debuting on the MSX. The popularity of the game soon grew though, and a remake was quickly released on the far-more-powerful MegaDrive as well. Following an aborted attempt at trying the original game, it's this remake that I've decided to take a more detailed look at. The star of the game is Yuko Asou, a strong-willed schoolgirl who has been 'chosen' to lead the fight against the fiendish King Rogles who, with the help of his five Dark Lords, stands poised to conquer not only the Dream World of Queen Valia, but also the Human World as well (that would be us). Wielding the Sword of Valis, Yuko must battle to restore the Force of Yang, which has been sealed into a Phantasm Jewel, as well as rescue her closest friend who has been seduced by the Dark Lord.

Yoko's quest take place over seven side-viewed stages most of which are split into several sections and all of which end with a boss fight. She has a fairly lengthy health-meter and is armed with the mighty Sword of Valis throughout her arduous adventure which at first is merely a normal sword which must be used in close quarters to slash up the numerous enemy creatures which converge on her position. However, dotted around the levels, often high up above the terrain, are golden icons which each contain any of a variety of power-ups and items. As well as the usual hearts to refill lost energy, there are also sword icons. These bestow glorious power upon the sword by allowing it fire projectiles - first one, then two, then several in multiple directions! This can prove immensely handy of course, and before long new types are shots are discovered as well.

Indeed, the first - simply called Swordshot - is adequate during the first few stages (although it is the only one available for a while) but you'll need to start using the new ones as soon as they start appearing. The Lazershot is more powerful and the Arrowshot covers more of the screen but even they pale in comparison to the Holy Sword and Apocalypse Sword! Each weapon has three levels of power which are increased by collecting successive icons, but beware - collecting a different weapon will start you at the first and weediest power level regardless of the power of your current one. Not too helpful if you accidentally collect an older weapon! The enemies take many forms but generally appear as either scary/grotesque creatures or evil warriors, often complete with weapons of their own. Regardless of their appearance though, almost all of them take multiple hits and the further into the game you get the tougher they get too, as you might expect.

Yuko isn't an especially agile young lady which is unusual for a video game heroine - aside from a bit of titillation, that's usually why they exist to begin with! Nonetheless, her repertoire of moves consists of a default run, which is actually quite a bit slower than in the MSX version (which I think I prefer), a short slide along the ground which is actually more helpful for crossing gaps in platforms than avoiding enemies, and two jumps - one normal and one super-high one. Control of her is a little sluggish at times though which means it's usually much easier to stand and fight or run away rather than try to strategically dodge and attack. Luckily, she also has some splendid magical powers to assist her otherwise slightly cumbersome endeavours. These are obtained one at a time in the form of 'Fantasm Jewels' upon defeat of each boss.

Accordingly, there are six magics in total which, as with so many other games, are based on the elements - the first gives you an earthquake attack, for example, and others include all the usual suspects - fire, wind, thunder, etc. Use of each depletes your magic meter, located beneath your life meter, with the more powerful ones using up more than the earlier, weaker ones. This meter can also be replenished by collecting the relevant icons which are the most numerous kind. However, these magical attacks comprise pretty much the only strategic element to a game which I was originally going to review as part of the 'Arcade Adventures' feature here. It seems that the Valis series, or at least this original, is actually a lot less 'adventurey' than I remember and plays much more like a platformy shooter despite the swords and magics and all that stuff.

Perhaps it was the anime-style cut-scenes that confused me as there are some quite extensive ones here, before the game and between each stage, which relay the story as it unfolds and reveals, slightly alarmingly, that Yuko is not an especially willing participant in her adventure! They do look great though and add a surprising amount of appeal and atmosphere to the game. The stages themselves are highly varied in their appearance - the first takes place in whichever Japanese town Yuko comes from but they soon move on to icy mountains, fiery caverns, ancient ruins, and all manner of other far-off locales. The backgrounds are mostly really nice too, but the sprites are a bit less impressive. Some, like most of the bosses, a few of the standard enemies, and of course Yuko herself are great, although not very detailed, but most aren't very appealingly designed and animation is generally quite poor - the enemy creatures don't even have a 'taking damage' animation and instead just freeze and flash before disappearing upon defeat.

Yuko does have one such animation though, which you'll probably see often! More often than not, this is the result of the scrolling which only 'pushes' on when she's about two thirds of the way across the screen meaning you often get little warning of approaching enemies, so proceeding with caution is usually prudent here! The audio is a bit disappointing as well. Prior to this review, the only game in the series I had played extensively was Valis 3 which I remember having some great music (I guess I'll find out soon when I revisit it!) but the music here, whilst quite atmospheric and appropriate to the action, just don't really sound very nice, and the effects are few and not very pleasant. Luckily, the game plays well enough to overlook the aesthetic imperfections.

As is usually the case here at Red Parsley, I wanted to review Valis in its original form and duly tried the MSX version several times but the horrors that unfolded were just too much for me and I had to retreat to the comfort of my precious MD. The version for Sega's machine has a noticeably slower pace that the MSX game and the graphics are more zoomed-in with larger sprites accordingly. I doubt it's because of this but it's so much more enjoyable to play as well. It's very much a Japanese game though which is the only place the Valis series has been popular really but the West's failure to embrace the series or character is still a little strange considering it stars a miniskirt wearing schoolgirl (for the first stage, at least, before she's transformed into an even more scantily-clad warrior with a gold bikini thing!). It's certainly not a perfect game by any means and can prove rather frustrating on occasion but it's a vast improvement over the awful MSX original and offers a rare opportunity to play as an unwilling-yet-feisty girly ass-kicker. Surely it's worth playing for that alone?