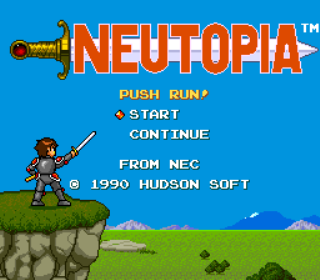 Ahh, RPG's! Contrary to the firm belief of several friends, this isn't a genre I dislike or have some sort of issue with. My biggest problem, and the main reason for my limited time with games of this type is... time, or a lack thereof. Well, that, and a short attention span I suppose! I have played a few over the years though and it’s a genre I really need to see more of, so with this in mind it’s high time I started covering a few here at Red Parsley. For my first, I thought I’d go for one that I’ve heard of but know very little about - Neutopia, released exclusively for the mighty PC Engine by one of my favourite companies, Hudson. It's a game renowned as a Zelda clone but it's hardly alone there! Original or not though, something vital for the enjoyment of RPG's is an engaging story and characters. This is something else that's not very original here so let's hope it makes up for it...

It's a game that's predictably set in the ancient land of the title. Like most RPG lands, it's one that used to be peaceful and prosperous until the arrival of evil demon, Dirth, and his army of equally evil demonic minions who soon wreak havoc, destroying the happy land and turning its residents into grumps. As well as causing general disarray, Dirth also kidnaps Princess Aurora, imprisoning her in the appropriately-named Climactic Castle, and steals the eight Spiritual Medallions, scattering them across the four contiguous areas that make up the land of Neutopia. Of course, it isn't long before a heroic young warrior arrives on the scene to save the day - in this case, a fellow named Jazeta. Upon arriving at the Sacred Shrine, he is given a 'charmed compass' that will guide him to the medallions. All he needs now is your courage to help him save the world, etc.

The game is viewed from the angled overhead perspective, made famous by the first Zelda game, throughout. Jazeta starts his quest from a magical shrine in the company of an 'old and wise mother' who basically tells him to bugger off and get on with it. From here, he arrives at the first of four 'Overworld' sections from where the game's dungeons, or 'labyrinths' are accessed. The Overworlds, known as 'Spheres', are themed - Land, Subterranean, Water, Sky - and each contains two labyrinths apiece. Finding their entrances consists of navigating numerous branching paths leading from the starting point but the way is fraught with many dangers including numerous evil beasties such as slimes, scorpions, flies, goblins, and frogs, and that's just on the first one - even octopuses spit fireballs from their watery sanctuary! As well as the evil beasts prowling the land, there are numerous helpful fellows as well, whose (hopefully) sage counsel can be sought.

They are usually found lurking behind doorways or down staircases, some of which are quite obvious while the entrances to others are hidden away, and they mostly offer advice or clues about where to go, what items you need to look for, or general information about your quest. Some of them are actually in possession of important items which they generally give up freely and usually with some enthusiastic words of encouragement as well! Jazeta's default means of attack is his sword with which he needs to strike even the most basic monsters (the slimes) more than once to see them off. Many enemies leave items behind when defeated including coins (silver or gold ones), cherries (partially refills life meter), hourglass (freezes enemies for a few seconds), wings (which whisk Jazeta back to the shrine), magic rings (reduces the power of stronger enemies), and bombs (for blowing open secret passages amongst other things).

Many more items are available from other sources though, as you would expect. Occasional shops sell some, usually more stocks of bombs or other consumables, but the most important items are the ones you only need to collect once. One of the first encountered is the Book of Revival which allows Jazeta to use passwords to continue his quest later. Others include several sword, shield, and armour upgrades, Moonbeam Moss which lights up dark dungeon areas, Falcon Shoes which act as a speed-up, the Rainbow Drop which allows Jazeta to cross small gaps, and an additional weapon - the Fire Wand, whose effects depends on how much life he has left. There are also a few items exclusively found in the labyrinths. Each contains a Crystal Ball which reveals the otherwise blank map of the area, a Crypt Key which allows you into the final room where the boss resides, and of course, the Medallions themselves.

The labyrinths are presented in a flick-screen style as opposed to the push-scrolling used in the Overworld sections. They feature probably about the same number of monsters, although different kinds - mostly less natural ones like skeletons, ghosts, oozing alien things, ogres, as well as the obligatory bats and cockroaches and stuff like that - but there are lots of traps and puzzles here too like retractable blades, bullet-spitters, fake walls, locked doors, and things of that nature. More precise movements are needed here of course, but I'm happy to report that control of Jazeta is pretty good. He can't move in diagonal directions which is a bit of a pain and he sometimes seems to take damage quite easily, but apart from that there are no complaints. Particularly efficient is the use of special items. One controller button is always used for the sword but you can quickly and easily assign a special item to the other button by using the pause menu.

It's a sensible system which works well and is indicative of the excellent presentation here which includes a nice title screen, intuitive menus and controls, and decent dialogue from the characters, although the 24-character password isn't very helpful if you're playing the game without the benefit of an Engine CD-ROM (on which game data can be saved). The graphics are nicely detailed throughout though. Everything is very tidy and appropriately coloured, and the sprites are particularly appealing - even the enemies which are many in design as well as numbers! The layout and design of the labyrinths is a bit repetitive, although there are always new enemies and obstacles to be found in them, but the Overworld sections are more varied and very enjoyable to explore. Perhaps even better than the pleasing graphics is the superb audio. The effects are nice, if a little infrequent, but the music is outstanding - very catchy and atmospheric.

Playing Neutopia represents my first taste of Engine RPGing and I'm happy to say that it's a pretty good one. It's not a perfect game by any means - the story isn't the most gripping, and even if Zelda didn't exist it wouldn't be an especially original example of the genre so it's easy to see where it gets its 'Zelda for the Engine' tag but Hudson at least copied most of the good stuff as well as having the sense to add a few ideas of their own. It's certainly not the most challenging RPG I've played - even the later labyrinths shouldn't present too much of a problem with practise - but it's not a walkover either. Most of the bosses are quite easy but the toughest parts are probably the labyrinths themselves which do get quite testing later on and the enemies in all areas of the game respawn after a while (although rarely immediately), although the latter can prove helpful sometimes, giving you an opportunity to stock up on bombs and gold!

So, it's not very innovative and, to be honest, I probably won't return to it very often now I've finished it (although you could say that about lots of RPG's, I guess), but Hudson's end product is as polished as usual nonetheless. Owners of NEC's white wonder don't really have much of an alternative to this (or English-speaking ones at least) but Neutopia is a good effort with a nice leisurely pace which I enjoyed playing through a lot. It's not a classic by any means but does fill a gap in the Engine's software catalogue nicely. Now onto the sequel!