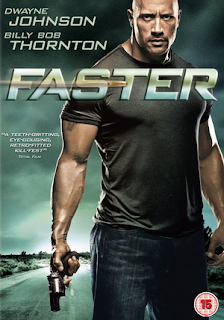 Tagline: "Slow Justice Is No Justice"

If there's one type of film you can usually rely on to be at least reasonably entertaining, it's the revenge thriller. I've therefore watched quite a few of them over the years but I've never seen one get out of the blocks as quickly as this one. Our dealer of justice is known only as 'Driver' who comes in the imposing shape of Dwayne Johnson and the film opens with him pacing impatiently in the prison cell he's occupied for 10 years for his participation in a robbery. It's the final day of his stretch though, and immediately upon his release he begins running up the quiet, dusty road outside. Before long he reaches a yard filled with cars. One of them – a pristine Chevrolet Chevelle SS – has apparently been left there for him complete with gun in the glove-box. He speeds away before eventually stopping outside an office building. He then strides intently inside, looks around, heads towards a particular cubicle, shoots the occupant in the head, and strolls back out again. 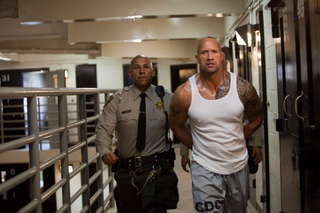 This all happens within the first few minutes of the film. There’s no build-up or back-story, that comes later in the form of brief flashbacks which reveal that Driver was in fact the getaway driver for a bank robbery masterminded by his half-brother. He was well chosen too - thanks to his skills behind the wheel they get away only to be double-crossed resulting in Driver's imprisonment and his brother's death. I guess I'd be a bit cheesed off if that happened to me so Driver understandably wastes little time in seeking out those who wronged him and exacting bloody retribution. As you might imagine, however, after the office shooting that kicked off the film, Driver is soon on the radar of the local authorities, notably a junkie detective known as 'Cop' (played by a suitably dishevelled Thornton) and his reluctant partner Cicero (Gugino). That's not all though - someone has also hired a highly-skilled hitman to take him out! 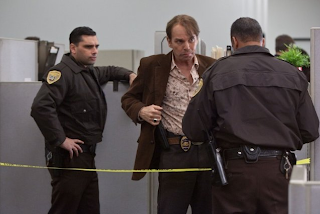 Driver has his work cut out for him then! Although Johnson predictably dominates much of the film's trim running time, there is an attempt to flesh out the other characters a little. Cop is nearing retirement and is eager to quit the drugs and get back with his former girlfriend (Bloodgood), while the meticulous hitman known as Killer (Jackson-Cohen) wants to quit the business and settle down with his own girl (Grace). Even all the names on Driver's 'to do list' have moved on since his incarceration with some living normal, crime-free lives. Driver has a singular purpose though, and is almost Terminator-like in his quest; there's very little story bogging down the action here beyond the big question - who set up Driver? Unlike Cop and Killer, however, it's not made remotely clear what - if anything - he'll do afterwards. Assuming he succeeds, obviously. 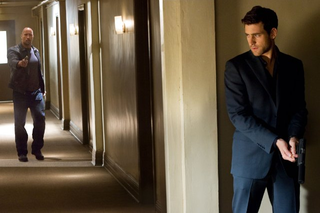 I guess that's not really the point with a film like this though, is it? Indeed, the point is action and the director does a surprisingly good job of that part of things at least, especially considering it's his first such attempt. There's a bit of a 70's style to the film at times and it's never very scientific by any stretch of the imagination. There are a couple of slight surprises in there though, and despite none of the characters being especially loveable, it's still mighty watchable. More than anyone else, this is probably one for the many fans of the artist formerly known as The Rock - he's bigger and angrier than ever, he smacks people up, he's ruthless, and he's pretty darn entertaining as he usually seems to be. It's a shame the producers couldn't build a slightly more involving film around his imposing presence - the opportunity was there after all - but Faster is still far from a waste of time in my book.