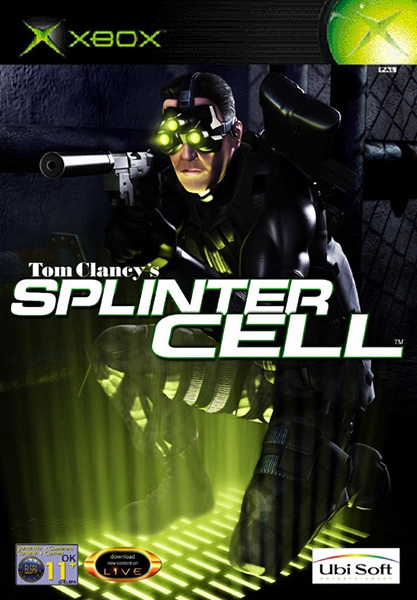 Well, I suppose it had to happen eventually didn't it? My experience of all post-Dreamcast consoles has been limited, and I've intentionally avoided several genres including all these pesky 'stealth' games but, after the acquisition of an Xbox and the subsequent purchase of games for it, I soon realised I should at least try one of them, for blog purposes if nothing else. This game, the first in the series of the same name, was the first one I found and was available for a wallet-busting 35p so I figured it was a good place to start.

As expected, it's one of those games that thinks it's a film, and accordingly I found myself cast in the role of Sam Fisher, a veteran covert field operative, who's been recruited by the NSA and sent into Georgia (the country, not the American state), initially to investigate the disappearance of two CIA officers, but of course that quickly snowballs into a convoluted plot involving presidential assassination, a subsequent coup, genicide, and a potential war amongst many other things, and it's up to Sam (and only Sam) to save the day. In most comparable games that I'm already familiar with, that would mean charging around shooting the crap out of everything with an extravagant array of weaponry, but things here are very different.

I suppose the clue was in the 'covert' part really, and indeed, aside from a frantic early dash through a burning office block, much of my time here so far has been spent creeping around slowly, quietly, climbing pipes, hiding in bushes, gliding across zip-lines, picking locks, hacking computers, and all that other stuff you see those 'black ops' guys doing in so many films and TV shows these days. In fact, after eventually taking in such locations as a police station, various embassies, an oil refinery, and even a submarine, it even sounds like a season of 24! There are of course lots of enemies throughout the game but the emphasis is very much on avoiding or quietly incapacitating them rather than shooting them up. 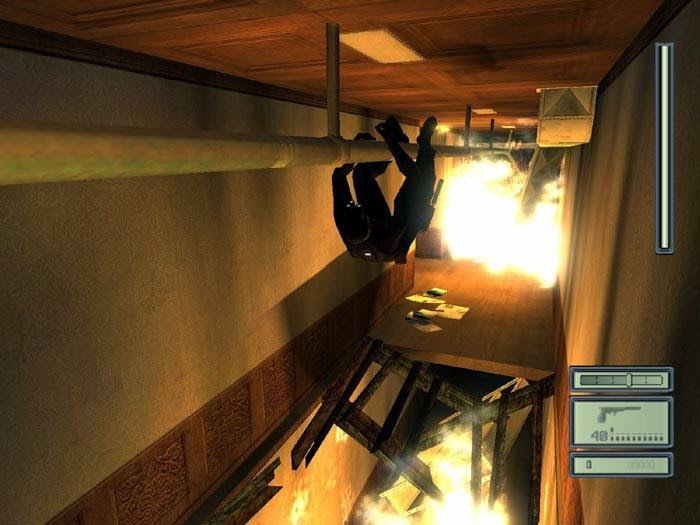 The controls for doing all this stuff were a little bewildering to start with, for a simple minded dimwit like myself at least, but the first 'mission' is a fairly decent training course which certainly helps. To take out an enemy (of anyone else that takes your fancy), you just need to approach them without being seen, grab them from behind, and then either interrogate them or just knock them out. This is only effective with solitary guards/henchmen though, obviously. When more than one is encountered at a time, more cunning techniques are required; either that or shoot them, but bullets are a precious commodity here with refills encountered very rarely.

There have been a few times I've run out of ammo only to reach a point where I can't progress without taking a shot (to knock out a CCTV camera, for example), and that means starting the stage again! However you deal with the enemies, though, great care is required. If you're spotted, either by a person or camera, or even if you just make a little too much noise, the alarm will sound; likewise if the body of a downed guard is found, and alarms spell big trouble! Basically then, it's a game that requires a lot of patience as well as skill, and accordingly a lot of time will be spent crouched in the shadows waiting for guards to pass or turn their back. 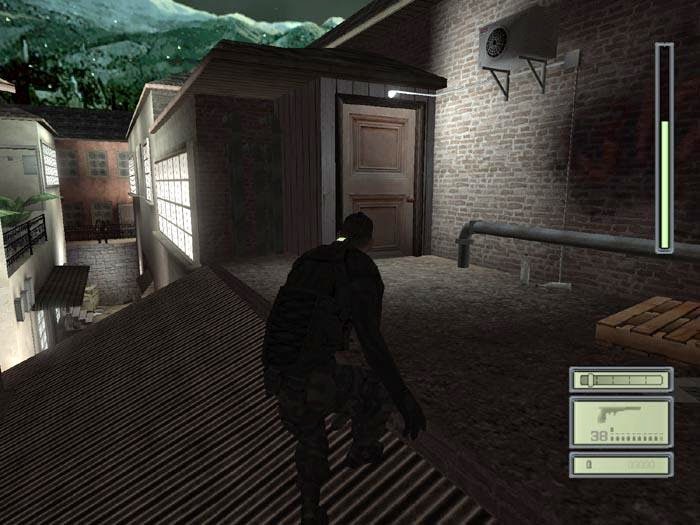 I'm sure all this stuff is old news to most gamers reading this. Some of you may even be laughing at me as I innocently detail my very recent new gaming experience, but the prospect of immersing myself in such a lengthy, story-driven game as this was a daunting one. I'm not very good at patience and, to be honest, I expected myself to think "Well, it was only 35p, I'll give it a quick bash and then move on..." but shiver me timbers if I didn't become rather absorbed by this adventure!

The audio and visuals are superb which helps. Aside from occasional dialogue, it's an understandably quiet game to play - you have to be able to tell if you're making any noise after all, and everything you do makes noise to one degree or another, but there is some subdued music playing in the background which will abruptly change depending on events in the game. If, for example, a guard detects you, it'll become much more dramatic. The graphics are just as impressive too. Most of the game is played in pretty dark locations but everything is superbly and realistically portrayed and the use of lighting and shadows is remarkably well done. 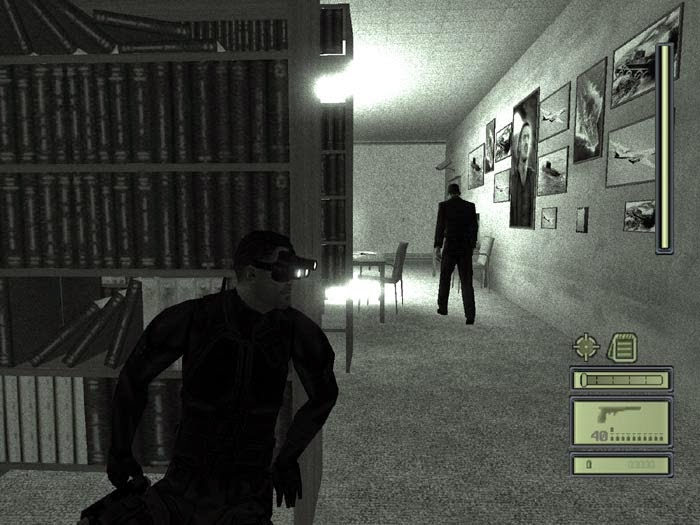 It's definitely a rather tricky game for someone like me but I made good progress all on my own and, I was surprised to find, it's actually more satisfying to stealthily avoid bad guys than it is to shoot them - something helped by the many gadgets Sam has access to (including the awesome night vision goggles, although goodness knows how the enemies can't see the bright yellow glowy eye-pieces!). I did have a few issues with the controls though, or more accurately how long it takes to perform some actions. For example, if I'm squatting in the shadows and a guard sees me, by the time I've stood up, drawn my gun, and aimed, I've probably been shot several times! I guess the solution to that, though, is to practise and get better.

As you might've gathered by now, I didn't really expect to like Splinter Cell much. In my mind it was the epitome of the modern style of game that I've so actively shied away from in recent years, but I've actually enjoyed myself a lot. Few games have moments as tense as those here, such as when a guard is walking towards your hiding spot, and few are as satisfying as successfully pulling off a daring infiltration either. It's questionable how much replay value there is here but, like the best examples of the kind of film it's trying to emulate, it's still a thrilling experience while it lasts. I wouldn't be too cheesed off if I'd had to pay full price for this game (and I can't even remember the last time I did that, such is my poorness), but for the pittance I paid? It's proven one hell of a bargain!