I must've played a fair few games that involve a tennis ball in some capacity but this must be the first and only game in which I've played as a tennis ball. The reason for this is not explained in any way in the game's instructions which serve only as... well, instructions, on how to proceed, and even then only briefly. The object of the game is to steer your perpetually bouncing tennis ball through all ten of the vertically-scrolling stages, avoiding the many obstacles and hazards until you reach the 'goal' at the end. You can move it forwards, left, right, and... that's it. The only surfaces you can bounce on safely are the hexagon tiles and the two types of special tiles - arrows which gives you a super bounce, and question marks which give you a bonus, though not always a good one. 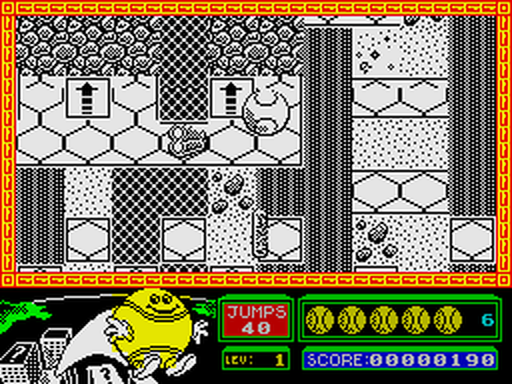 The stages are anywhere from six to twelve screens long, roughly, and absolutely packed with lots of dangerous stuff. There are several kinds of surface, all of which cause your ball to pop like a balloon (I always thought tennis balls were pretty tough?), and there are even some surfaces which you can't bounce over at all (they're meant to be mountains and walls). On top of that, there are several types of enemies which are similarly deadly to the touch. Some of them move in basic back-and-forth patterns, some travel straight across the screen, and others will seek you out, but all are a pain in the arse. Much like pretty much everything in the game in fact. For yes, Bounder is more than a little tough going, at least for untalented oafs like me, thanks to some rather punishing stage designs. 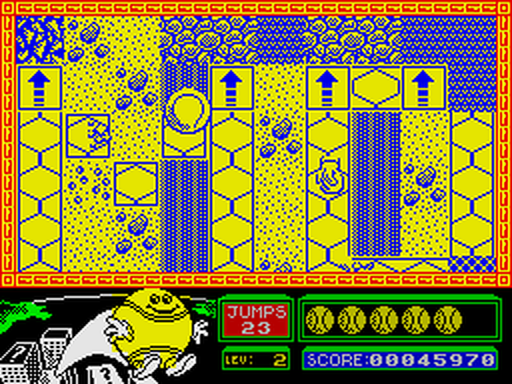 They look quite nice though, if you like monochrome graphics at least. The grid-like designs are detailed and each one is a different colour, which is nice, but the audio is a lot weaker, predictably, with few effects and no in-game music. How far through the game you will get, though, depends largely on how patient you are. There are usually two or three paths at a time, you see, but they are rarely very long so you'll often need to hop back and forth between one path and another. The only way to realistically complete a stage is to repeatedly fail at it until you've learnt the least-lethal path. Even the game's inlay advises you to map each stage! This isn't necessarily a bad thing but there are two irksome issues which make it significantly more challenging than it might have been. 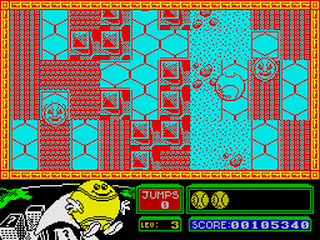 Firstly, when you lose a life you're quickly respawned but this is often on the opposite side of the screen to where you were, so you'll pretty much have to learn all routes and options in each stage if you want to finish it. Secondly, there is no couple of seconds of blinking invulnerability after losing a life so it's possible to lose many lives in quick succession by getting stuck on a hazard, especially if the game insists on respawning you in an inconvenient location. It's mainly for these two issues you'll need a lot of patience to play Bounder extensively, but the bonuses are always the same so they can also be learnt which helps (including an end-of-stage bonus round). Besides, even with a couple of annoyances, it's still an appealing and pretty original game that should last a good while... but you may lose your temper first.

Gameplay Video: here's a video of the whole game being played by one of the talented fellows at RZX Archive (check out their great channel here). Oh, and don't watch if you want to avoid spoilers!