Over on Facebook myself and a handful of like-minded friends often get together in a chat group and spend an unwise portion of our working day blabbering on about all manner of nonsense*, retro game-related and beyond, when we should probably be doing more important grown-up things. Of all the subjects that are often discussed, however, one continues to vex me so - the Nintendo 64, or more accurately, how it is regarded by this gathering of esteemed retro gamers and beyond. 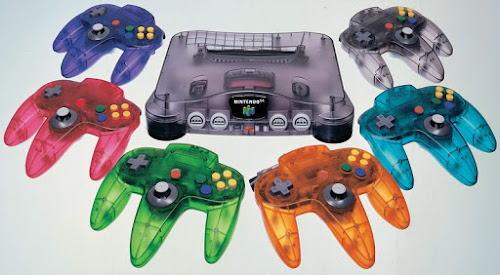 My fellow shirkers, you see, are all keen on the wonderful games of yesteryear as I am, particularly if they are Japanese and native to a console. The N64 qualifies most comfortably based on this criteria, and yet it has long been the recipient of much scorn and vitriol from my otherwise-rational friends. Does it deserve such treatment? Should it stand proudly alongside all the other mainstream consoles, most of which are enthusiastically embraced by retro gamers, or should it stand apart?

This is the question I am aiming to answer here. As you may well have guessed, I do not really share the opinion of my friends on this issue, or I didn't prior to concocting the feature you are reading at least. Morose at the Saturn's relative failure, I bought my N64 about a year after its release along with a couple of games. I will no doubt go into in much more detail about this purchase in a future 'Gaming Memories' post here, but suffice to say, I was immediately pleased with my purchase.

A couple of things about it were a little irritating: the memory carts were teeny (although many games had their own internal storage), the ROM cartridges Nintendo opted for were a little restrictive, and those infamous graphics were a bit too blurry in some games, but I had a great many more reasons to be pleased with my new console. It had a lovely controller - the first analogue pad I really enjoyed using in fact - and ports for four of them for stonking multi-player mayhem, but the biggest reason to love the N64 in my view is the same reason as any other console should be loved (or not, as the case may be) - its games. In this area I feel Nintendo's system was noteworthy in several ways. Firstly, it had a great good/bad games ratio, and secondly it was home to many fantastic titles that could be found nowhere else, and many of which were of a style that was largely new to me.

Unlike the Saturn, the N64 was designed for and excelled at producing swanky 3D graphics. Accordingly, a vast majority of its games were of this nature too. Hardly surprising considering the 3D boom was in full swing at this time. A focus anywhere else would've surely spelled disaster? Apart from racing games, I had played few 3D games up until this point (I wasn't much of a PS1 gamer at the time) and enjoyed even less, but the N64 was home to some fantastic examples.

One genre it really excelled at for me was 3D platformers. They existed before the N64, obviously, but few if any were very special previously. Super Mario 64 was the game that really kickstarted things of course, and it's fully deserving of the accolades it still receives, but it also prompted some other superb (and less superb) titles. Many of them came from Rare in their heyday - games like Banjos Kazooie and Tooie, Donkey Kong 64, and Conker's Bad Fur Day, but there were others too. Fans of action adventures and RPG's were well-catered for as well. There were entries in several existing franchises such as Resident Evil, Goemon, and Castlevania, some wonderful original titles like Body Harvest, Space Station Silicon Valley (still one of my all-time favourite games), and some shooty-flavoured examples like Jet Force Gemini, Sin and Punishment, and the Turok games.

Some other popular series' were found here too, such as Harvest Moon and the first Animal Crossing, and of course we had two cracking Zelda titles - Ocarina of Time and Majora's Mask. More violent tastes were catered for in the form of first-person shooters like the first two Quake games (great conversions) as well as the mighty Goldeneye and its semi-sequel, Perfect Dark, and there were some less FPS-ish explodey options like Blast Corps, Battletanx, and Worms Armageddon as well.

Another strength of the N64 was its selection of the aforementioned driving/racing games. There aren't too many proper car racers to be honest, though one excellent (and exclusive) example springs to mind in Beetle Adventure Racing but there are plenty of other vehicles. Kart racing comes in the form of Mario Kart 64, of course, as well as the arguably even better Diddy Kong Racing, and we also have one of the best snow-based games in 1080° Snowboarding, and even a cross between the two genres in Snowboard Kids. Switching surfaces to water gives us the magnificent Wave Race 64 - still probably the finest such game to exist - and Hydro Thunder, and eye-shreddingly fast futuristic action is well and truly covered by Probe's exclusive Extreme-G and the mighty F-Zero X, still among finest racing games I've ever played and worth buying an N64 for alone.

There are plenty of other more than decent games to be found on the system too, but there were admittedly some genres that were notably lacking. Fighting games, for example, were restricted to a couple of gimmicky efforts such as Rakugakids and the first Smash Bros game, and a couple of Virtua Fighter wannabes in the form of Fighters Destiny and Flying Dragon. Faring even worse were shoot 'em ups with the few available being 3D ones like Star Fox and Star Wars Rogue Squadron, but there wasn't really anything for fans of the more traditional forms of these games.

Were these genres really in much demand during the N64's lifetime though? Any new console is meant to be about looking forward after all, not looking back, and this 64-bit monster arrived at the peak of the 3D/polygon craze. Why would developers fill it with antiquated 2D titles? Of course, much of this is from the perspective of the N64 as a 'current' console; I'm meant to be determining its validity as a retro treasure, and it's precisely this lack of 2D games that sees many in the retro community pour scorn upon it. There are a handful of 2D games (or kind-of 2D) to be found though, such as Mischief Makers, Yoshi's Story, Paper Mario, Bangai-O, etc, but I certainly wouldn't try to argue that it's a system heaving under the weight of games of this type. There are very few in truth and I suppose I'd have to concede that it's a fair argument from a retro gaming perspective.

There are other arguments against the N64 though. There are claims that its only good games come from Rare or Nintendo themselves, with the former even giving the latter a run for their money, and it's another point that it's hard to argue with, but in my experience, a lot of people seem to take issue with the N64 simply because it's a Nintendo console, whether they would admit it or not. After all, no one can possibly be tough and manly if they play a game with bright colours or cute characters.

A cynical attitude? Perhaps so, but there is definitely some truth to it. Nintendo have had a reputation as a family-friendly company making only childish games since forever and it was strengthened in the N64's days. It was a console that saw none of the kind of violent games we're used to now - nothing even close to them in fact. But it was still home to some genuinely fantastic games. Even if most of them did come from Nintendo and Rare, there were still plenty of top stuff to choose from. Not quite up to the standards of its predecessors, perhaps, or even rivals like the PS1, but while that might've meant less variety, it also meant less crap (and let's face it - there was a lot of that, on the PS1 in particular). Most of the titles I've mentioned above are among the best examples of their respective genres if you ask me, and some even count among my favourite games ever.

Despite this splendour, however, it's a console that gets a lukewarm reaction at best from most retro gaming enthusiasts these days. I know of few fans and no one that collects for it. The system itself has become quite collectible, with numerous colour variations and special editions seeing release (I still think the Pikachu version is crap though) but it's definitely not held in anywhere close to the same regard as other consoles, even ones that were around at the same time like the Saturn.

As far as I'm concerned, if you're one of those stubborn gamers looking for nothing more than hardcore old-school 2D action, then the N64 is definitely not the console for you. Even I, as something of a fan, can't possibly argue that point. I guess the question is: does an absence of 2D games make a console ineligible for consideration by retro gamers? While it's true that many 3D games from the mid-to-late 90's have aged badly from a graphical point of view, that alone doesn't make them unplayable, and N64 games don't suffer from this nearly as much, I don't think. 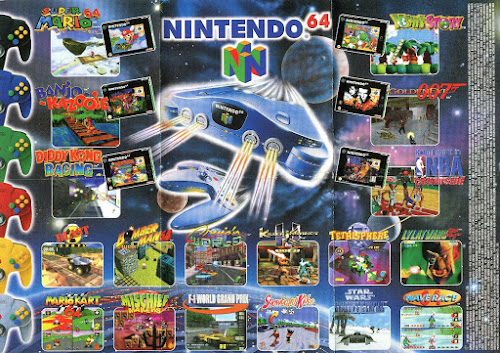 It doesn't have a huge number of titles to get through, and they may be mainly 3D action/adventure games or racing games, but most of them really are superb, and can't be played on any other system either. If you simply want to play bright, cheerful, and above all fun games, without being concerned about the very latest cutting-edge graphics or finding new gruesomely depraved ways of killing people, then the N64 is one of the finest consoles out there in my opinion.

An unpopular opinion with the retro-gaming community I suspect but... so what? I can't be alone in my appreciation for this splendid console? So lets hear from some more of you. Do you like, or at least respect the N64 and its contributions to the world of gaming? What is your favourite game? Let's celebrate the N64! :)

* - Special Disclaimer: This is of course a joke. Neither I nor my fellow chatters of Team Flicky would dream of spending any work time on such a frivolous endeavour, obviously.

Gameplay Video: Here's a look at some of the splendid games the N64 has to offer courtesy of YouTube user 'jvgsjeff'.