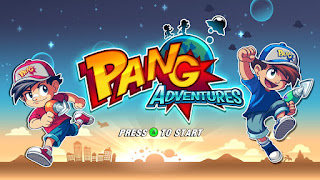 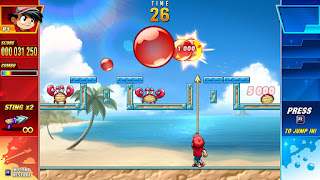 The original game's fifty stages are almost doubled in number here but the locations around the world are reduced to six: Bora Bora, Death Valley, Scotland, the Arctic, Hong Kong, and Asteroid P4N6 (which is apparently the source of all the balloon-related carnage), before the final showdown with the evil alien overlord him/her/itself. Each of these is home to fifteen single-screen stages which must all be cleared of colourful bouncing death before you can move on to the next location, but en-route to it.... Wait! What's this? A boss fight! Yes that's right, for there are now scary tentacled alien bosses to dispatch, and all while you're still flying along no less, before you can finish an area proper. 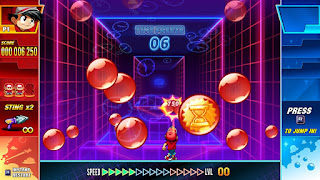 Aside from the bosses though, the game initially appears to be pretty much the same as before, except with fancier audio/visuals, and the core gameplay is the same - there is no sense in changing the formula too much - but there are plenty of bells and whistles. These are in the form of power-ups such as types of firearms (pistols, machine guns, rayguns, flamers, shurikens, etc), multiple-hit shields, balloon freezers, and lots of foodstuffs for bonus points. Things have been shaken up on the balloon side of things too. The usual red ones are still the most common followed by the now-faster blue variety, but the spherical menace also now include numerous special and previously-unseen types. 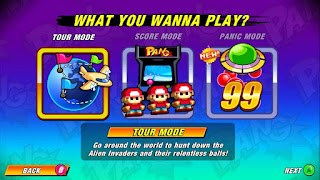 Among them are helpful explosive balls, as well as less helpful smoke-filled examples which partially obscure the screen, lightning balls which zap you if you're still holding your harpoon when their charge tries to 'earth', and even lava and slime-filled varieties (watch out below!). There are plenty of other features to keep things interesting too - those pesky animals return (crabs, birds, and molluscs) and can be helpful or harmful, and there's other stuff like destructible blocks, force-fields, springers, elevators, and what appears to be small galaxies encased in spheres that need your protection (let's hope they aren't actual galaxies as failure to keep them safe will likely cost many trillions of lives!). 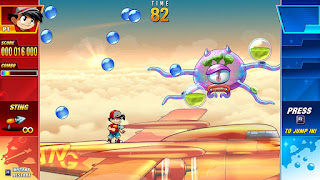 Of course, a big part of the original game's appeal was its two-player co-op mode and happily that's an aspect of the game that not only returns here but has been brought right up to date. The red and blue characters are present and correct for use in all game modes locally (and one can now revive the other after taking a hit - at the risk of their own life) but there is now a splendid online play option too, and that is mighty fine. If you can find someone else playing, that is - there aren't too many yet from what I could tell. I'm sure that will change before long though, and the local co-op modes will do until then. So, all in all, this welcome Pang update seems like a more than worthy bearer of the name. 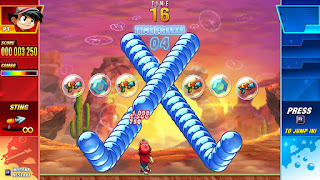 Indeed, those new visuals are slick and appealing and feature great animation, and there are some nice effects such as the screen-shaking explosions too. The audio is also lively and full of catchy tunes and jingles (it's a shame we don't get the distinctive harpoon sound from the first game though) and the presentation is top-notch - pretty much what you'd expect from a DotEmu release, and from a modern update/reboot in general really. There are a few little niggles though. Most obviously, the smallest balloons are too big for my tastes (they were teeny before), and surely it would've been easy to include a few more locations/backgrounds? That's okay though, it's still a very nice-looking game, but I also had a few quibbles with the rather uneven difficulty. 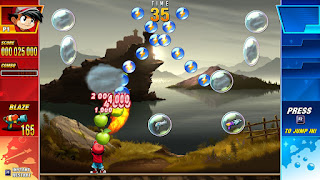 The time-limit can be more than a little tight for one thing. This and other factors might see you stuck on a particular stage for aeons, but then the next few might take seconds each. This is partly down to the stage design - there's more button-mashing involved here, and less puzzling/platforming than the previous games, and consequently there's a little more luck (or lack thereof!) involved in progress on occasion. On the other hand, you do effectively get infinite lives, as seems to be the norm these days, so you can try stages as often as you like, although the downside to this of course, is that you're likely to see the whole game relatively quickly unless you're able to restrain yourself. 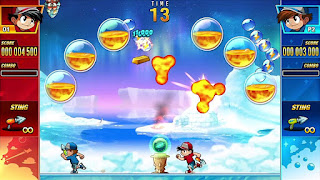 This is just the Tour mode though, admittedly - the (initially locked) Score mode is more akin to the original game (i.e. finite lives) and there's also a Panic mode which is basically a 99-stage survival mode, so even without the online play there's plenty to keep you playing. It's a great game for high-score chasers too - there's now a combo system in place which gives you higher bonuses the more balloons you pop in succession, and that adds something of a new dimension to the play at times, especially if you're competing with a friend for bragging rights, and there are even more ways still to boost your score including a 'target' on each stage which results in potentially sizeable bonuses if breached. 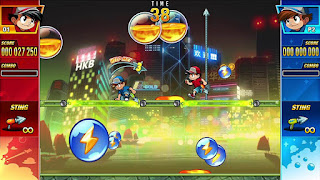 So yeah, a few things are a little different or missing, there are quite a few new things... it's about what you'd expect from a reboot with no big surprises awaiting you. Like the previous games it's not perfect, but none of its issues are serious enough to push you away - it's a hell of a lot of fun to play through, especially with another player, and the price is good too (£6.99 here in the UK). It really is great to see the two harpoon-wielding scallywags back on our screens in a game that should please their existing fans. It's still Pang so if you didn't like if before you probably won't change your mind here, but if you've never played it before, this is a fantastic opportunity to try it in arguably its finest form yet.