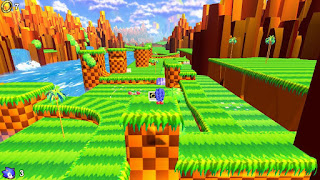 Crikey! No sooner do I get excited about a new Sonic game in the old 2D style of the classic MegaDrive games but now along comes a new fan-made 3D game as well! If you are anything like me this might initially be a prospect that strikes fear into your heart. I still haven't played too many of Sonic's three-dimensional adventures admittedly, but the ones I have played have not been tremendously appealing to me, right from the very first one no less (I can't remember being much more disappointed in a game than I was in Sonic Adventure). Many of them have been competent 3D platformers but most haven't really felt like Sonic games. This new title, however, looks a bit different. It is the work of a small team who have just released it for 2016's Sonic Amateur Games Expo (SAGE), an event for fans to show off their Sonic-related projects, and it is... wonderful! 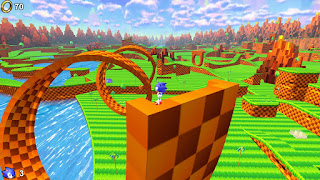 Think back to MegaDrive days, and even Saturn days I guess - back before Sonic had been properly represented in 3D, I mean. Did you dream about what his first 3D adventure would be like? I'm sure you did and, if so, there's a good chance your dreams looked more than a little similar to Sonic Utopia which is, quite frankly, stunning to behold. There is only one stage so far, based as you may have already guessed, on the good old Greenhill Zone, but it's an enormous open-world stage and crammed full of things to do. There are millions of rings to collect, a few power-ups hidden away here and there in computer monitors, and lots of enemies roaming about the place (mostly ones from previous games), but it's the construction and layout of the stage that impresses the most. 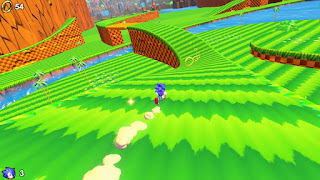 As you can probably see, the huge stage is full of platforms of all sorts of shapes and sizes, slotted in and around the landscape all over the place. Linking them (or going over, under, or around them) are tons of pathways, ramps, passages, and chutes, even including a corkscrew and several loop-the-loops, and Sonic can go charging around this environment however he pleases. And charge he does too - he moves at an appropriately nippy pace here, can jump and perform spin attacks, and can charge up a super-dash from a standing start, all of which enable him to go flying though the stage at breakneck pace, only needing to stop for unjumpable sections of the landscape (and even then you can run up the sides of some of them!) or when you fall in the water (and yes, you still get the panic-inducing tune!). It really is quite amazing for a fan-made project. 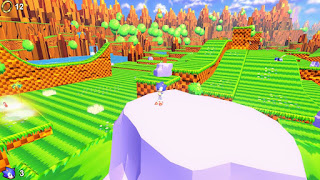 It has been billed on the SAGE site as an 'experiment' so I'm not sure if we'll get any more than the one (giant) stage here, but surely after going to all this effort it would be worth making some more stages, maybe even giving the game a full release, pending Sega's permission of course. Only time will tell if that happens but in the meantime I think I can safely say you'll enjoy playing what we do have. This, for me, is exactly what I have always imagined a 3D Sonic game to be like. It's not perfect, of course, but it looks great, sounds great (we've got a remix of the original tune for company), and is enormous fun to play. I genuinely can't remember the last time I found myself with a big grin on my face for the entire duration of a game, but that's exactly what happened here. Even Yuji Naka himself shared it on his Facebook page - high praise indeed, surely?

Check out this gameplay video and tell me you don't want to give this a whirl? Luckily for you can can! Click here for much Sonic fun :)