Well, there have been whispers for a little while and now it's been confirmed by Sega themselves - the mighty Daytona is coming back to our arcades! Whether you love or hate the original Daytona USA it's impossible to deny how much of an impact it had back in 1993/94 and the years immediately following its release. It was the first title to use Sega's awesome Model 2 board and it was a smash hit, soon ranking among the the highest-grossing arcade games of all time.

In fact, it was so successful that it's surprising it took Sega so long to return to the franchise, with Daytona USA 2 arriving in the arcades in 1998 and then Daytona USA 2001 for the Dreamcast in... well, 2001 I guess! Both were pretty much just more of the same but with new licks of paint so they weren't quite so successful, but the Daytona name is one that has continued to shine brightly, for Sega fans in particular, right up to the present day. It's been a long time since then though. 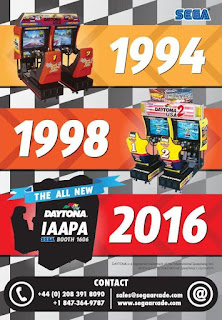 But now the fading prayers of fans have at long last been answered, for just announced by Sega is... Daytona 3 Championship USA! Whether it comes as a result of Sega's recent fan survey is unknown at this stage, although it must have at least reminded them that they are sitting on a mountain of potentially-profitable IP's, but we can now rejoice regardless of whatever prompted them. The new game will first be seen at IAAPA from November 15-18 in Orlando so for now the details are few and far between. What we do know is that it will feature three brand new tracks including a recreation of the newly renovated Daytona International Speedway, as well as fancy remastered versions of the original three classic courses, and there will also be new cars and game modes too. The cabinet that will house all this awesomeness is shaping up to be a monster as well - it will feature a 47" LED monitor which will be linkable for up to eight players, as well as a 'Live TV' inspired spectator video billboard marquee with 27" display, while the game will feature a live in-game camera system and an all-new party mode allowing operators to run special events easily. No doubt a whole load more information will emerge soon in addition to some tantalising images and footage of the game itself, but at this early stage I think you'll agree it at least sounds very promising. I'm certainly going to look forward to this one.

I'm actually lucky enough to live about a mile away from an arcade which is home to this fantastic set-up. I can only hope the new game finds its way there too! 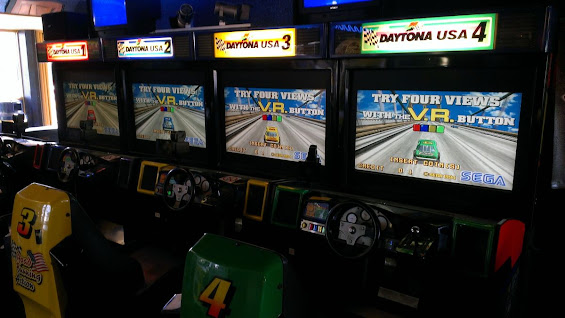