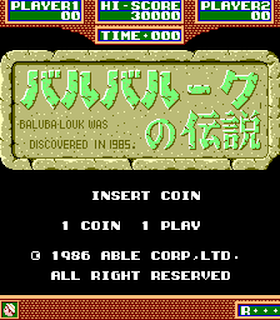 Since starting this feature, all the way back near the time I started the blog itself no less, I've been surprised by just how many candidates are out there. There are still at least ten more I intend to cover eventually, so it's perhaps a bit odd that I've opted to take a look at this little-known mid-80's example next. The reason it's odd is because it's not strictly speaking a single-screen platformer at all! That is to say, its many stages are not confined only to the size of a single screen - each one is actually nearly two screens wide and scrolls accordingly - but they play very much like the typical single-screen plaformers I, and perhaps you, know and love, so it's still well worth covering here if you ask me. 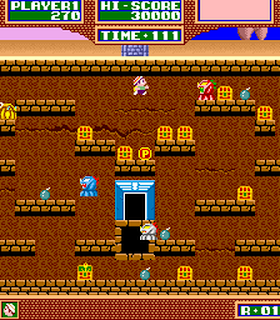 Lord only knows what the back-story is but I'd guess our straw boater-wearing hero is a treasure-hunter of some sort, for each stage sees him pootle along in his little jeep, then descend down a mine shaft or something into what is revealed to be a stage! There are 32 unique examples before the game loops back to the beginning and each of them contains a sprinkling of small platforms, most of which are laden with what appears to be treasure chests. You might think that collecting these would be optional - I'm pretty sure a treasure hunter (assuming he is one) isn't obligated to snaffle everything he encounters after all - but no, you must collect them all to finish a stage and move to the next. 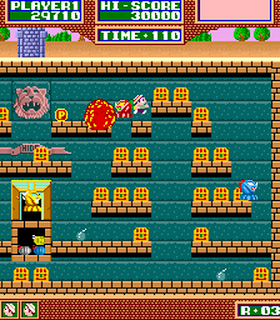 Of course, each stage is also occupied by several enemies which could be goblins or moles or something. Whatever they are, they emerge from the mystical doorway at the centre of the stage and follow you around, and since they are fatal to the touch, it's probably best to keep moving. To that end, Baluba (for I think that's his name) has only basic running/jumping abilities and no means of attack, so quick, precise movements are advisable. He gets a little help though, in two forms. Firstly, each stage contains one 'P' icon which is basically a Pac-Man Power Pellet as it turns all enemies into frowning yellow faces which can be eradicated by touching them, but they soon return from their dormancy. 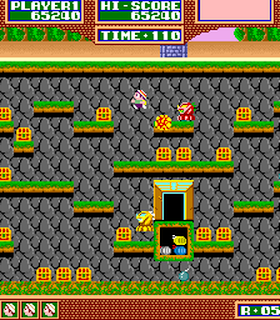 It is still very helpful though, obviously, especially if you grab it with three or four enemies on your tail! Also providing assistance are bombs, a handful of which are found on each stage. These can be detonated by jumping up to headbutt the platform directly beneath them or by jumping while walking past them which triggers a very short fuse. You can also force the treasure chests to help you by hitting the platform beneath them which opens them. When collected, the open chests will leave behind one of two items depending on which of two types they are - chests containing coins will leave a bomb while those housing gems will leave a trap, and as there are already bombs around, they're the preferable choice. 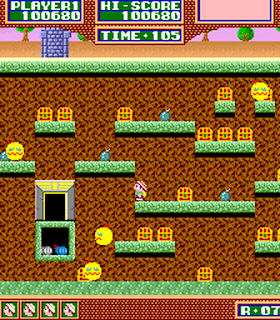 They are triggered the same way as bombs but shoot bolts in both directions rather than blow up. Any enemies hit by a bolt will leave behind a token bearing a Greek letter, and there are several types which each have a unique effect such as bonus points or warp tunnels, and one will even clothe Baluba in a special outfit which looks like a superhero costume. If he collects a Power icon while wearing this he gets to fly around on a little multi-coloured cloud for the remainder of the stage! Each of the short-range bolts can go through as many enemies as lay in their path, too, which is definitely something to bear in mind while playing and even injects a little strategy into the mix as well. 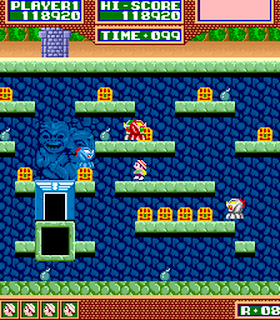 Do you just rush around grabbing the chests as quickly as you can, or do you try to trigger bonuses and power-ups instead? It's a tricky game whichever tactics you might employ and this is mainly down to the enemies who move as quickly as Baluba, and the platforms which you can't jump up or drop down through. This combined with Baluba's lack of offensive abilities (assuming no bombs are around) means that you need to be careful on longer platforms or you might get trapped by two or more crafty enemies who often seem to try and cut you off. Aside from that, the going is reasonably fair. The enemies don't even get tougher or more numerous as you work your way through the game. 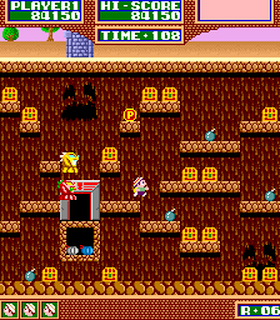 Technically things are pretty good. The action is accompanied by a catchy tune and a few upbeat jingles, the sprites are quite colourful, and the backgrounds change frequently - every stage in fact. They mostly use very basic patterns and many of them look similar but it's still quite impressive. There is just one main tune and things do get a little repetitive after a while, but there's nothing unusual there - you could say the same about the mighty Bubble Bobble and there's no way anyone in their right mind would want to stop playing that! The catchily-named Baluba-Louk No Densetsu isn't anywhere near that level of genius (what is?) and nothing about it is as timelessly appealing either, but it's definitely good fun. The action is pacey, the controls and collision-detection are spot on, the challenge is probably just about right, and there are enough bonuses to keep the lure of a new high score within reach. It's quite addictive too, though perhaps not on the scale of some similar games, and that's probably the kind of thing that kept it from achieving a similar level of success - it just doesn't have that hook that some of the others have. I'm not sure I'd call it a hidden gem, therefore, but it's still well worth playing if you've not encountered it before. After all, how can treasure hunting be anything but fun?