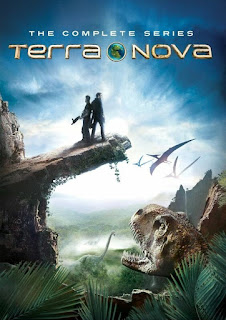 Before too long the first of several 'pilgrimages' has been sent through to establish a colony there with the intention of giving mankind a second chance. The big question is, have we learned from our past mistakes? Apart from the first group sent through the portal who include soldiers to check if the area is even suitable for a colony, the core of the people that make up each pilgrimage are specially chosen for their skills - engineers, palaeontologists, doctors, etc. One example of the latter is Dr. Elisabeth Shannon (Conn), a skilled trauma surgeon. In the interests of keeping the special few happy, the families of those selected can accompany them to the colony. Unfortunately for the good doctor, her husband Jim (O'Mara), a former narc with Chicago PD, is in prison for breaking the two-child rule.

Naturally, however, he escapes (with a little help) and sneaks through the portal along with his wife, three children, and the rest of the tenth pilgrimage, who soon find themselves 85 million years in the past on the lush, tropical super-continent of Pangaea which, as they're soon reminded, is also home to many different types of plants and animals long extinct in 2149, including dinosaurs. Lots of dinosaurs.

Protecting them from becoming the shredded stomach contents of these mostly-ferocious creatures is Terra Nova, a large fenced community of about 1,000 people. Like most communities it contains a eclectic population including a variety of personnel, and all the necessary amenities are provided for them including decent housing. Some tech has been brought through the portal including medical equipment, computers, and guns (including non-lethal sonic guns) for the soldiers/guards who are there to keep the people safe as well as deal with internal incidents. They also have a few armoured vehicles for 'OTG' excursions (Outside the Gate). Even with these things, though, Terra Nova is carbon-neutral and self-sufficient, needing little in the way of supplies from the future, with most materials scavenged from the surrounding environment and all waste recycled.

The colony itself is made up of an infirmary, research lab, market, bar, agricultural areas, housing, a command centre, and a few other bits and pieces. The number of residents gradually grows with each pilgrimage of course, but how many the big-wigs in 2149 are ultimately planning to send through isn't clear. The population does take losses now and then though - those guilty of a serious crime or found to be working against the interests of the colony are exiled 'OTG' to fend for themselves, and a few people have also fallen victim to the hungry dinos that live all around.

It is clear after the first couple of episodes that there's an external threat beyond that posed by the lumbering screechers though. This threat, it turns out, is known as the 'sixers', so called as they are made up of people who arrived with the sixth pilgrimage, and they were sent by the evil corporations who want to strip-mine the distant past and profit from it. In other words, they're typical idiotic, short sighted humans. This coupled with the more immediate threats posed by living in a small, self-contained colony in the middle of the Cretaceous Period certainly give the show a hell of a lot of potential for stories and exciting action, but does this 13-episode season take advantage of this grand potential? Probably not to be honest, or not as much as it could have at least, but more on that later.

In all fairness to its producers though (including Steven Spielberg), I can't imagine they only planned for just the one season, for yes, in case you didn't already know, Terra Nova was sadly cancelled a short while after the 13th and final episode aired. This was reportedly because, despite receiving decent reviews and ratings, the show proved too expensive to produce. It was, in fact, the most expensive TV show ever made at that time - the pilot episode alone cost a whopping $20 million - and it was beset by other problems and delays even beyond its original budget. It's a real shame too, if you ask me, as there's a lot of promise here.

Most of the main cast seem well suited to their roles including the extended Shannon family - skilled investigator and devoted family man Jim, caring surgeon Elisabeth, nerdy daughter Maddy (Scott), brooding son Josh (Liboiron), and five-year-old Zoe (Mansour). Other standouts include Stephen Lang as Commander Taylor, the no-nonsense, battle-hardened leader of the colony, the lovely Simone Kessel as Washington, Taylor's loyal number two, Damien Garvey as Boylan, a former soldier who now runs the colony's only bar which he uses as cover for his minor criminal schemes, Ashley Zukerman as Taylor's smart-but-estranged son who has gone missing, and Christine Adams as Mira, the elusive leader of the Sixers who seems to have a personal grudge against Taylor.

But while every show needs at least a few pesky people in it, the setting of this particular show prompted as much interest from potential viewers in Pangaea's distinctive native inhabitants as it did the newcomers, perhaps even more. That's understandable I guess - dinosaurs are always a source of fascination - but they don't feature as heavily here as you might expect.

The most common type we see are velociraptor-type things nicknamed 'slashers' which are the ones the characters are usually looking out for when they're pootling about outside the colony, and there are a few other types including some biggies, but neither the fast, agile snappers nor the big, lumbering clompers are in every episode and they don't really play a pivotal part in any of the stories either. What we do see of them is pretty good though. Not Jurassic Park levels of brilliance but the CG is reasonably convincing for its part. More impressive to me was the scenery in which the show takes place. It was filmed in Australia but you probably wouldn't have guessed that - most locations have a suitably primeval look about them and everything looks gorgeous, making for a fittingly impressive home for the show.

However nice it might've looked, though, the show apparently didn't find enough success to warrant a second, probably even more expensive season. It's annoying too - not all great shows have a stunning first season after all; much of the time they're more about establishing characters and laying the groundwork for bigger things to come, and I think that's what we have here.

Perhaps part of the reason it was less successful than hoped is because viewers were expecting something more along the lines of Jurassic Park: The Series, and Terra Nova definitely isn't that. I'm glad it's not too - it would've been more exciting in the short term I'm sure, but the novelty would soon have worn off. What we did get with Terra Nova was a likeable cast, a very appealing setting, and the potential for some great stories, some of which were already underway. But no, all we got was this solitary season. It has a frustrating ending too - not from an entertainment point of view but because it's very probably the same thing that would happen if the portal/colony/etc were real, thanks to our ridiculous species.

It does leave us with a couple of cliff-hangers too, as you might expect, but even if the show had a super-happy ending where everything worked out wonderfully, it still would've been nice to see how the story continued, and given the ending we did get there was plenty of potential for future advancements so it does prove quite rather frustrating. It would've been nice to get more background on some characters, too.

I also can't help but wonder what the establishment of the colony might do in terms of temporal paradoxes. Supposedly the portal leads back to the distant past of an Earth from an alternative timeline or 'parallel universe' but even so - it would be naive, not to mention irresponsible, to assume life wouldn't develop in a similar way there, so the colony could be jeopardising the future evolution of mankind there. Oh well, that's a subject for another time and place I suppose, it certainly won't be addressed in future seasons of this splendid show. It had an interesting premise and was a TV pioneer in some ways, but was over before its time...