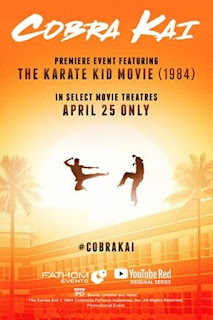 As I'm sure you don't need me to tell you, there have been a lot of reboots and belated sequels to old classic films and TV shows in recent years. Some have worked, others have been disasters, so when Cobra Kai was announced I suspect "Here we go again!" was the reaction of most people who cared enough to have one. It is of course based on the Karate Kid film series of the 80's, primarily the original movie which arrived a mind-crushingly vast 35 years ago, and that was a bit of a worry. It is a precious film to many who grew up with it, after all. One of my friends counts it as his favourite film of all-time, for example. Even more concerningly, the new show would be centred around the two leads from the original movie - Ralph Macchio as Daniel LaRusso and William Zabka as his enemy and rival, Johnny Lawrence.

That was the big news for most regarding this show actually. Any dillhole could do a modern retelling of the story, or a totally different story 'inspired' by the earlier films, but to base this new show around the same characters as the beloved original film, with the same actors portraying them? That immediately raises interest levels, but also makes the project a considerably more difficult one.

So how do you pick things up with characters 35 years later and keep the interest levels up? One option is to turn the tables and focus on the 'bad guy' from the film, and that's exactly what they've done here. Indeed, when we catch up with Johnny Lawrence, former star pupil of evil Sensei John Kreese, it's quickly apparent things didn't go his was after the events of the film. He's a drunk, broke, single, doesn't appear to have any friends, and is estranged from his teenage son. On top of all that, within the first half of the first episode, he loses his job as a handyman when a bitchy customer complains about him. After later defending a kid being bullied, however, he remembers his karate background and decides to reopen Cobra Kai and become a sensei himself, mainly just as a means of making money.

At first he has just the one student - Miguel Diaz (Maridueña), the kid he saved from bullies, who also happens to be his neighbour. Miguel takes to his studies well, adopting Cobra Kai's newly reinstated mantra (Strike First, Strike Hard, No Mercy!) in the process, and after demonstrating his abilities at school, Sensei Lawrence soon finds himself with a number of eager new (though totally unskilled) students.

Daniel on the other hand, has done rather well for himself as you might expect. He's has a hotty wife in Amanda (Henggeler), has a couple of children including teenage girl Sam (Mouser), and runs a chain of luxury car showrooms, creatively named LaRusso Motors. His life seems to be going very well in pretty much all regards. Right up until he's driving along one day and sees the Cobra Kai logo staring back at him. What the devil are they doing back? The former champ certainly isn't too happy to see that scary yellow cobra that was the source of so much grief in his teens, and he's even less happy to see that it was revived by his old rival who, prior to their epic confrontation at the All Valley Karate Championships, had bullied him so mercilessly. Or had he? Well, there are two sides to every story as they say.

Now we get to see things from the supposed bully's perspective, and things perhaps weren't/aren't as one-sided as you might previously have thought. It really is a superb way to approach this show too, putting a fresh spin on a story and rivalry that will, for most viewers, be very familiar. In addition to the two main stars, a few of the other characters from the films return such as Randee Heller as Daniel's mother, and there are too many film references to count, both verbal and visual.

That to me was probably the first sign that I was going to love the show. Sure, many would just call it fan service, but to me it was a sign that the people behind the show actually cared about making it good rather than just using the name to make a quick buck. It should be remembered, though, that this is a slightly obscure webseries (a YouTube Red Original, no less) rather than a prime time main network show, so it doesn't have a huge budget. Accordingly, the production values aren't dazzling and some of the acting can be a little ropey, but that just adds to the charm and authenticity if you ask me. The whole karate craze was a late-70's-to-80's thing anyway, and mostly found in low budget films even then, so it suits the show's style that it's not too flash or filled with big names.

Those who are here are pretty good too, all things considered. Besides the two main returning stars, the most prominent characters are Amanda and Sam, Daniel's wife and daughter respectively, Miguel and Hawk (Bertrand), Johnny's two best students, and Robbie (Buchanan) as his estranged son who - you guessed it (minor spoiler alert!) - trains under Daniel, ending up as Cobra Kai's main rival.

Buchanan's performance is perhaps the weakest overall, mainly due to his expressions, but generally the standard is decent enough. I particularly enjoyed Hawk's sudden transformation from insecure, near-mute nerd to cocky, punk-haired fighter, and Miguel and Sam have some great scenes too. But of course, the stars of the show here are... well, the stars of the show. Fans of the original film will get a real kick out of not only seeing Macchio and Zapka again but especially from seeing them as the same characters with the same(ish) rivalry all these years later. Both are fantastic here and it's so great seeing/hearing all the references to events from the films. Much of it is obscure enough to go straight over the head of many viewers, but the attention to detail is as welcome as the nostalgia.

Having watched the films numerous times over the years, it's hard for me to say if younger viewers, or indeed older viewers who never watched them, will enjoy Cobra Kai, but I don't see why not. The story is good, the characters and relationships are interesting, it's perfectly paced at around 30 mins per episode, and the production values are fine for a low-budget show, including the inevitable fight scenes which are well-filmed, but that 80's vibe definitely adds a lot too.

Aside from the widescreen picture, and I guess the odd smart phone, everything about the show screams 80's, and that, as anyone who's not stupid will no doubt agree, is truly wonderful. This is mainly thanks to the show's focus on Johnny who's a bit of a fossil, stuck in the past and reminiscing about his glory days. He listens to nothing but 80's rock, drives around in his old Pontiac Firebird, and has barely even heard of the internet. A lot of the humour in the show comes from his complete ignorance of or failure to understand anything remotely modern (or his regular drunkenness) and helps paint a totally different picture to the alpha male bully we all took him for, and the same is true for the responsible, upstanding Daniel, except it's the other way around. Near enough everything about this show is great though.

Remakes and reboots are often feared - justifiably in many cases - but Cobra Kai is pretty much a perfect example of how it should be done. I was just as prepared to dislike it as anyone, but it has turned out to be such a welcome surprise and probably my favourite new TV show of the last few years. More please!