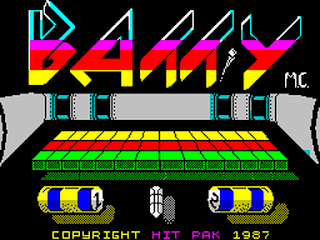 One of the great things about being an 8-bit home-micro owner in the 80s was not only the many cool magazines we got (or our parents got for us), but that the mags often included cover-mounted tapes that featured demos of new games and other bits and pieces. On the odd, rare occasion, however, they had been known to feature a full game! This was a time of celebration and revelry, even if it was often short-lived when the game turned out to be as much fun as shovelling rhino poop without a shovel. BUT!! One game has gone down in legend as being more fun than any kind of poop-shovelling, and that game is... Batty, shockingly! Yes, that's right, 'mounted' on the cover of the October 1987 issue of Your Sinclair was a cassette containing the full Batty game! I mean, it was never going to be another Lords of Midnight but it was still a full game which was obviously wonderful news to us cash-strapped urchins. 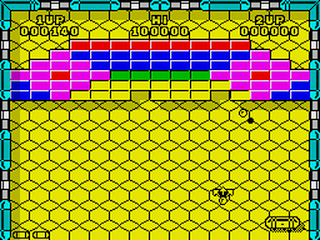 As you probably know well already if you are reading this, Batty was an Arkanoid-inspired bat 'n' ball game. There are 15 single-screen stages on which the object is the same as usual - destroy the bricks on the screen. They are arranged in various patterns, many of which include indestructible examples or ones that require multiple hits. Get through all 15 and the game loops back to the beginning, although it's no easy task getting through the game even once. The longer the ball is in play the faster it gets and aliens arrive at the top of the screen after a while who can deflect the ball and also throw bombs at your bat, both of which can make things very difficult. Happily, there are of course numerous power-up capsules released by some bricks when hit which will also be very familiar - the likes of lasers, extra lives, stick, larger bat, multi-ball, power-ball, bonus points and warp can all be grabbed and there is also a smart-bomb capsule to destroy all aliens currently on-screen. 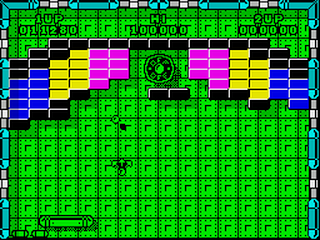 So yes, Batty is, for all intents and purposes, virtually an Arkanoid data disk. A lack of originality in an otherwise-enjoyable game isn't much of a sacrifice considering it's a freebie though. Interestingly, it didn't get a standalone commercial release until after it had already been gifted to YS buyers, so it's not like it was an old full-price game when it appeared on the cover-tape either. For this reason it's awesome but considered simply as a Speccy game, it's still decent enough. The graphics are nice and colourful and the controls are pretty reliable too. It obviously doesn't top the game that directly inspired it, it does manage to improve upon it in one way - a two-player mode where each player controls a bat on their own side of a vertically-split screen! It's a great idea and gives extra appeal to what is a pretty tough game for one player. If you have fast reactions though, it's still good fun, and was a fantastic freebie in any case.

Gameplay Video: here's a video of the whole game being played through (once) by one of the talented fellows at RZX Archives (check out their great channel here). Oh, and don't watch if you want to avoid spoilers!