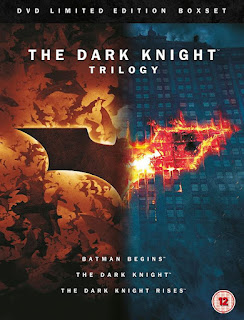 If there's one thing I've noticed as a movie fan over the last decade or so, it's that superhero movies are big business, and if you go virtually anywhere online and talk about them, you'll find two main groups - Marvel fanboys and DC fanboys - who seem to enjoy spending their time insulting each other and trashing each other's movies. Despite being dismissed as childish by the DC fans, I think it's safe to say that Marvel fans have had the bragging rights as far as the overall quality of their movies is concerned. As I've mentioned here before, I've never really read any of the comicbooks and hadn't even heard of at least some of the characters that have risen to prominence in recent years prior to them appearing in movies, so it would be a reach to call me a Marvel fanboy, but I've certainly enjoyed their films more. The DC fans have had one line of defence against their nemesis over the years.

Yes that's right, for as bad as the likes of Man of Steel, Justice League and Suicide Squad (both versions) have been, the poor, weary DC fans have at least had The Dark Knight Trilogy to fall back on when things seemed lost. Even though I try not to get into these pointless Marvel vs DC arguments, I have had to take the DC fans at their word regarding this trilogy since I haven't seen the first two since they were first released and I've never seen the third one at all. In light of the recently-released (and very creatively-titled) The Batman, however, I figured it was time to brush up on my Dark Knight proficiency. To that end, I present unto thee: 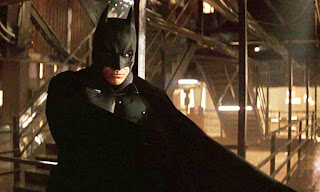 I don't doubt Batman got an origin story (probably many) in printed form but I think I'm right in saying he hasn't had one on screen. Until now! We therefore meet Bruce as a child and see his parents die. Years later he's still angry and vengeful, travelling the world, mixing with crims, training, etc, until returning to Gotham years later to take his place at Wayne Enterprises while secretly becoming the vigilante that would become Batman. Of course, there is soon a bad guy for him to contend with in the form of the Scarecrow (Murphy) who wears a scary mask while using a spooky fear-inducing hallucinogen. There are tons of others though, the film has a large and impressive cast including Michael Caine who makes an excellent Alfred, the always-reliable Gary Oldman as not-yet-commissioner Gordon, Morgan Freeman as Batman's equipment supplier, Lucius Fox, Liam Neeson as Ra's al Ghul, and so many more worthy of mentions. The main bad guy is a bit more low-key here than most Batman villains but I think it's so the hero himself gets the spotlight in his origin story, and it works - my favourite part of the film is seeing how Wayne becomes Batman to begin with, and Nolan does an excellent job of it here. A superb start to his trilogy... 8/10 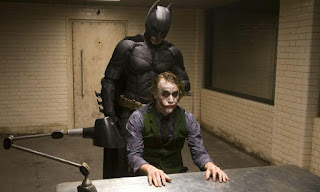 I think I can say with confidence that this is the most revered part of the trilogy for most, thanks in no small part to Heath Ledger and his ultra-remarkable performance as Batman's perennial foe, the Joker. It takes place around a year after Begins and sees our flappy hero established as Gotham's resident vigilante and taking on organised crime with support from (eventual) Commissioner Gordon and district attorney Harvey Dent (Eckhart). Recognising the opportunity, the Joker takes out or takes over most of the crime gangs, starts killing off high-profile city officials, blowing stuff up, and generally causing chaos. It's certainly an interesting premise, given the characters and actors involved, and as I'm sure no one needs me to tell them, the results are remarkable. Ledger's committed work is amazing, so much so that many often forget that pretty much everything else about the film is also amazing. Bale, Caine and Freeman are again standouts, but aside from Ledger himself, I think the most interesting aspect of the film is quite how you would deal with someone like this Joker. Eckhart's Dent has a good go but of course, the mantle falls to Batters in the end, and it's a battle for the ages! A near-flawless comicbook film... 9/10 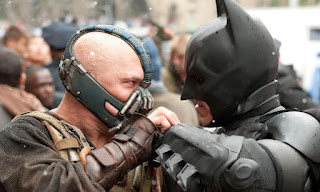 Judging by internet chatter, I was fairly sure, prior to this post, that this instalment was looked upon as the weak link in the trilogy, and for some reason I had never seen it to have my own opinion. However, I was happy to see that's it's not at all whiffy. Following the events of the last film, the Caped Crusader is now a wanted man, so both he and Mr. Wayne have gone into hiding (great way to protect that 'secret' identity). UNTIL! A bulky fellow with a strange mask who lives in the sewer starts to amass his own army. Gadzooks! The masked oaf is of course Bane (Tom Hardy) who has a weird voice as well as supreme strength, and it's his plan to first dispose of Batman, then detonate a neutron bomb in Gotham. Harumphf! While Batters is indisposed in a well/prison, a brave, honest cop (a rarity in Gotham) named John Blake (Gordon-Levitt) attempts to assist now-finally-Commissioner Gordon in dealing with Bane and his cronies. He is a formidable foe too, more so than I had expected, and the good guys also have Hathaway's divisive Catwoman to contend with as well. I didn't really know what to expect from this final instalment but I thoroughly enjoyed it, I must say. No real weak points and a good ending too... 8/10

I don't really know why I've paid this trilogy so little attention over the years - I saw the first and second films at the cinema but never since, and I hadn't seen the third one at all. It's not because I'm a Marvel fanboy which would no doubt be the first explanation offered by DC fanboys. I don't really know the reason to be honest, but after having watched them for this feature, I can certainly see why they are held in such high esteem by not only DC fans, but movie fans generally. I think that was the kind of praise they received in their day - they aren't just good comicbook movies, they're good movies full stop. High praise, all things considered.

Many have lauded the darker, more realistic tone of the films, and it's a valid point, but one aspect of them that stands out for me is the cast. I can't really think of a single bad example - Bale, Caine, Oldman and Freeman are all perfect for their roles, as were Murphy, Ledger and Hardy as the trilogy's respective bad guys. I did find Neeson a bit odd as Ra's al Ghul but that's probably only because I'm more used to the Arrowverse version(s). Hathaway was somewhat more divisive as Catwoman but, not being a comicbook fan, I thought she was fine, and she is obviously delightful to look at, even if she did have an ass-double in the catsuit (boo hoo!).

For some, the trilogy is about Heather Ledger's performance above all else and it's hard to argue. I wouldn't have even recognised him as Heath Ledger if I didn't already know it was him, to be honest. And that's coming from someone who counts A Knight's Tale among their favourite films! As memorable as his Joker is though, I think it's a rare case of every part of the production fitting together superbly. Everything, from the cast, Nolan's direction and writing (in addition to his brother Christopher and David S. Goyer in the case of the latter), the soundtracks, special effects, even down to the duration and pacing of the films is fantastic. They aren't perfect of course - what films are? - but you would be hard-pressed to find a trilogy that's better (Lord of the Rings doesn't count for obvious reasons).

To me, aside from a couple of things, The Dark Knight Rises is the sequel to Batman Begins while The Dark Knight is more of a standalone film, but however you look at them, each is an excellent film in its own right, and each also has things that tie it in to the other two. DC fans might not have had too much to throw back in the faces of Marvel fans over the last 20 years or so, but they can still rightly be very proud of this particular trilogy which pack as much of a punch now as they ever did.