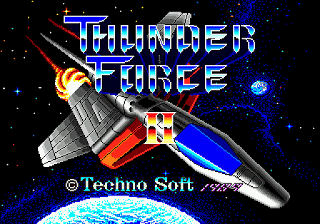 Most buyers instead opted for the admittedly-superb conversions of games they had been enjoying in the arcades such as Golden Axe or Ghouls 'N' Ghosts while poor old Thunder Force 2 remained on shop shelves virtually ignored! It's a shame more people didn't decide to try it out, too, as it's a challenging but not unreasonably tough game, and ... what's that? Even a bit of originality? Surely not? Only a few fans of the series know that the original Thunder Force was a multi-directional overhead-viewed shooter. Far more well known is that from the third game onward, the series was strictly a side-viewed affair. Thunder Force 2 is where the transition took place and it sees the evil ORN Empire from the first game return, and with a new, all-powerful battleship known as the Plealos.

There are eight heavily-defended stages to battle through before you get a chance to destroy the huge vessel, and they are viewed from both overhead and side-on, with the game switching back and forth between each stage (1, 3, 5, 7 are overhead; 2, 4, 6, 8 are side-on). On each of the former, your job is to find and destroy four enemy bases hidden in various locations around the large multi-directional scrolling landscape. Of course, this isn't quite as easy as it sounds! Like the first game, each of these stages is defended by many ground-based guns and these are significantly more numerous at the site of each base, and you will also have to deal with the many evil aliens and their incessant shooting. Time is of the essence on these levels too, and a bonus is awarded at the end of the level depending on how long it takes you to find and destroy the bases.

If you take too long, a large alien ship will attack! Okay, they're not exactly super-bosses but they can be a pain the arse! The other alien ships patrolling these stages are not of particular importance - they are only there to make things more difficult for you and destroying them earns you points only. They are many and varied, however, and include some that split apart when they're near you increasing their chances of hitting you, ones that seemingly appear and disappear at will, and one particularly irritating type of alien ship that produces streams of red blobs that home in on your ship, destroying it if they touch it (rear shot is invaluable here). There are even some ultra-annoying devices that surround your ship and block all incoming and outgoing fire for a while. Grrr!

The even-numbered levels are all of the more traditional horizontally scrolling type. In other words, the objective is simply to make it through them in one piece and destroy the boss at the end. Also present are mid-level bosses, many hazards such as moving scenery, motion-activated lasers and missiles batteries, and a similarly large number of evil alien ships and gun emplacements. Bonus points are awarded based on the number of enemy ships destroyed too, so more attention should be payed toward them than in the overhead levels (unless you don't care about getting a hi-score). Whereas the overhead stages all appear to be set over different planetary surfaces, the side-viewed stages are apparently not. The first two (levels 2 & 4) seem to be set inside a some sort of space station or enemy installations but the other two are a bit more unique.

The third is more organic/natural, seemingly featuring vegetation in addition to all the death-dealing weapons and alien ships while the last, much like the preceding overhead stage, seems to be set amid ancient ruins. Or possibly not so ancient - the game's story does speak of the ORN Empire raining terrible destruction upon a Galaxy Federation planet! If you manage to survive the eighth and final stage, there is one more treat in store for you - a ninth stage of sorts, in which the mighty Plealos resides. It takes the form of another overhead stage and looks very much like the (mostly) lush green first stage, except now the landscape appears to have been consumed by fire and lava and is inhabited only by the enormous end of game boss and its defence craft.

In order to 'liberate' each of these levels, you'll of course need some formidable weaponry. Luckily, some is available. Before it's powered-up, your ship, called the Exceliza, the second-generation of Fire Leo crafts, can fire either a forward and backward shot simultaneously or a twin forward shot which is obviously more powerful but leaves you open to attack from behind. These two default weapons are available on both the overhead and side-viewed levels but most other power-ups can only be found on one or the other. Something that your ship can only do on the overhead-viewed levels, however, is drop bombs. These aren't smart bombs though, but small, relatively weak little bombs that fire automatically when you fire the main weapon. They might not seem like much but they are essential for destroying any ground targets, specifically, the bases.

Each type of stage offers up to six weapon power-ups and, unusually for this type of game, each one that you pick up is added to your collection rather than replacing whatever you're currently using. You can switch between them at will, too, but beware - if you lose a ship, you'll lose every power-up collected up to that point! Those available for the overhead levels are: Laser (poor range but very powerful), Wide Shot (poor power but good range), Five-Way (fires five arrow shots forward in a wide pattern), Destroy (three-way bombs but weak main gun), Clash (lots of blue rings twirl around the screen - my weapon of choice), and Hunter (very weak but homes in on targets). They can be found by shooting down a particular kind of small-but-fast ship (often arriving in pairs), but you'll need to be quick - if they get away, it won't come back!

Weapon options for the horizontal levels are: Laser (poor range but pretty powerful), Mega-Flash (like the standard rear-shot but with better range), Wave Shot (good range and medium power, and can shoot through scenery), Side Blasters (shoots directly above and below your ship - great for taking out the guns), Nova (a powerful directional shot - my weapon of choice), and Hunter again (same as before - weak homing shot). Other power-ups to look out for include splendid Drones which circle your ship protecting it from smaller incoming fire while unleashing a limited amount of their own, and a temporary shield whose name I can't understand (there's some suspect speech in this game!), both of which can be found on the overhead and horizontal stages.

As you might have guessed from some of these screenshots, this is a pretty taxing game! I can reach level eight fairly consistently but I've only progressed beyond that once without accidentally cheating (I pulled the cartridge out without turning off the console, then reinserted it, which somehow gave me infinite lives!) and that remains the only time I've finished it! It's not unfairly tough though, with the possible exception of the fifth stage, and should provide a nice, steady challenge. Graphically, it's aged a little as you might expect from one of the first ever 16-bit console games, but it still looks nice enough and has a nice variety between all the levels - there's no way you could confuse any of them with another! There's also a good variety of nicely drawn and animated sprites.

The music in the game is a bit of a mixed bag though - some tunes are great and very memorable, but others are a bit forgettable. Sound effects are plentiful, varied and of a very high standard, and include some of the bassiest, most boomy effects I've ever heard! Luckily, one thing that definitely hasn't aged is the gameplay! I don't know about all of you but I really like it when a game developer tries to do something different within a well-trodden genre. It doesn't always work out, of course, but at least they tried. I think it was this that initially drew me to Thunder Force 2. If either type of level didn't work well, it wouldn't have held my attention for long, so the fact that I still greatly enjoy this game means it must've done something right! And to be honest, as great as this game's sequels are, I've missed the overhead levels. Give Thunder Force 2 a try, you might be surprised!

Gameplay Video: here's a video of the whole game being played by Amy Rose (check out his/her great channel here). Oh, and don't watch if you want to avoid spoilers!