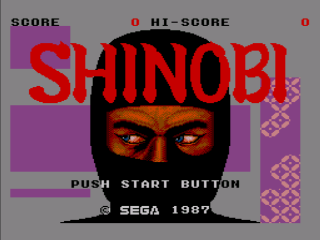 The original version of Shinobi was a fantastic game for its day and proved to be extremely popular, but for many years the only version of it I knew was this version that Sega treated all of its loyal Master System customers to. It's one of the few conversions handled by Sega themselves and happily it's a splendid version of the arcade great, arguably the best, but it's not identical. The game's story is still the same, which involves the children of the Oboro clan (or of various world leaders, according to the Western versions, as I recall) being kidnapped, but unlike the arcade version where rescuing the children was mandatory, here you don't actually have to rescue them. You can though, if you want, and it's a very good idea to do so anyway, for each one bestows upon courageous Joe a reward of special magnificence!

The biggest and most immediately obvious difference between this and the arcade version (as far as gameplay is concerned) is the existence of a life-meter. Poor Joe would keel over after a single hit in the harder, money-grabbing arcade version, but here you afford to be a little more reckless! This does make the game easier as you might expect, but don't expect it to suddenly be a walkover because it's not! This is still a pretty tough game and one that I never managed to complete in all my years of trying (although I could get to the final boss without too much trouble, after all the practise I had!). The actual stages themselves, though, are faithfully recreated and contain the same enemies and obstacles as their parent, and playing through them is pretty much unchanged.

As previously mentioned, the poor, traumatised children being held hostage in positions of questionable strategic significance are apparently each in possession of a special reward that Joe will receive upon rescuing them. Unlike the arcade version in which Joe starts with shurikens before he obtains a gun, here the transition takes longer. His normal shurikens are first upgraded to a rapid-fire variety before being replaced by fast-firing knives, then small, bouncing bombs, before he finally receives the powerful gun, with each upgrade being provided by a child. There is also one each stage which will allow entry to the between-stage bonus round seen in the arcade version. Successful completion of this then rewards Joe with ninja magic, and if you manage to take out a blue ninja during this round, you'll get two magics instead of one!

Others child power-ups include one which extends his life-gauge and another which refills it to maximum. Each stage features a power-up child, and one to bestow each of the other rewards mentioned. Any remaining children on a stage will award Joe with bonus points. Anyway, enough talk about children, that's pretty much the only differences between the two versions other than the aesthetic. The humble MS does a decent job of replicating the graphics of the arcade version though. The sprites are understandably a bit smaller and suffer from some trademark MS flicker when a few are on the screen at once, but apart from that they're a good match, and the backgrounds and bosses are all instantly recognisable too. The music is also reasonably accurate, although there are fewer tunes here, with the game instead repeating the same tune for most stages, but it's a good one and is more prominent than the somewhat inconspicuous music of the arcade game. Sound effects are also superb here and very distinctive.

As most of you already know, Shinobi is overall a fantastic game. It was perfectly suited to the era in which it was made, but of a high enough quality to remain just as enjoyable more than 20 years later. Most conversions of it were at least pretty decent - even the Speccy gave it a good go - but the best conversion is usually acknowledged to be the PC Engine version which, with the exception of the missing bonus stage, is close to arcade perfect. It has, however, always been this mighty fine Master System version that I've had the most affection for. It has good, colourful graphics, catchy music, and challenging and additive gameplay which it's hard to fault. Impartial I may not be, but anyone can see that this is about as good as Shinobi could be on the MS, and that's very good!