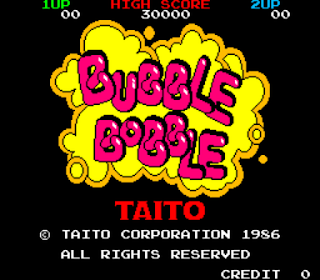 What more can be said about this all-time great? Whilst perhaps not as well known as Mario or Sonic, the cute dinosaurs of Bubble Bobble are just as iconic to many gamers, myself included, and have now appeared in a lot of games on nearly every system ever created, in one guise or another. My first encounter with the bubble-blowing twins was in 'Kwiki Meals', the cafe near my college. It was here that I ventured every lunchtime to play Bubble Bobble (and eat a burger), and I was often late back to class! It was the game that first brought the great Taito to my attention and they've been one of my favourite companies since. Sadly, both Kwiki Meals and the arcade masterpiece it once housed are now long gone but I've had a regular fix of Bubble Bobble ever since.

Most of you will know the drill by now - Bub and Bob have been turned into dragons by the evil Super Drunk who has also kidnapped their girlfriends! In order to get them back and be restored to Human form, they must battle their way through a hundred rounds of multi-platformed, monster-infested caves until they can face, and hopefully defeat, Super Drunk. Bub and Bob, who start each round in the bottom left and bottom right corners of the screen respectively, must clear each single-screen round of baddies in order to proceed to the next. To do this you must trap them in bubbles which both Bub and Bob can blow at will. The bubbles fly forward quickly, before floating up the screen being carried by the air currents in the caverns. Freshly-blown bubbles are surrounded by a shiny orange aura until they are a certain distance away and it is only during this brief period that enemies can be trapped in them.

Once an enemy is trapped in a bubble, it must be popped quickly to kill it, either by touching it with the spines on Bub and Bob's head and back, by jumping on it, or by pushing it into a wall. If you fail to pop it quickly enough, it will pop by itself, and the re-released enemy will be angry and much faster. It's also possible to bounce off bubbles instead of popping them when you jump on one or fall on one from above. This is an essential skill to learn as sometimes it's the only way to escape from part of a level or reach some high platforms. Bubbles also stick together if they touch each other, whether they contain enemies or not, so if you time it right you can cause a mega-pon chain reaction meaning mega-points! There are eight different types of standard enemy altogether and each has his own movement patern. Learning these are obviously the key to success here, but don't take too long - if you stay on one stage too long, the undefeatable Baron Von Blubba will appear and stalk you until there's nowhere left to hide!

One of this game's many memorable points is that it jointly holds the record with its own sequel as one of the most fruit laden game ever (this is a good thing)! Items are spilled on a platform somewhere in the level every time an enemy is vanquished and other items appear seemingly out of nowhere now and then. There is an enormous amount of them to be found, some of which are very useful, particularly the umbrella which skips several levels, and there are power-ups and various kinds of screen-clearing smart bombs too. Some other items are even available in different colours, varying their effect. Also appearing liberally are lots of different fruits, gems and foods which can be seized for bonus points. Additional bubbles sometimes get 'blown' onto the screen by the air currents running through the caverns, and included amongst these are 'special' bubbles which, when popped, unleash special powers.

These include fire bubbles, which spill fire which scorches enemy's, lightning bubbles which sends a enemy-killing lightning bolt across the screen, and water bubbles, which send a torrent of water cascading down the platforms killing all enemies in its path. The last kind of bubbles to be found contain letters. Collecting them will gradually spell out E-X-T-E-N-D down the side of the screen. Complete the word to clear the round and get an extra life! There are many more little intricacies and nuances to this game and to be honest, I could go on all day about them, but discovering them for yourself is one of the things that makes Bubble Bobble as great as it is. Despite initially seeming random, almost everything you do has some sort of affect on the game, from how quickly you finish a round right down to a particular digit of your score when you reach a certain point.

Many games have been called classics over the years. Whether they truly are or not depends on your definition of the term I suppose, but few are as genuinely timeless as Bubble Bobble. The cute, colourful graphics which are full of character, that music by Zuntata which could just be the catchiest tune of all-time, the flawlessly structured gameplay, the fiendish stage design, the fantastic fun of jumping around the platforms trying to time an attack to perfection, playing the game with a friend, it goes on and on. It's regularly sited as one of the greatest games of all-time, and it's hard to argue. Bubble Bobble isn't just a single screen platform game, for many it's the single screen platform game! It's certainly true that it's among the most enduring platform games of all-time and that kind of lasting adulation can only be for one reason...