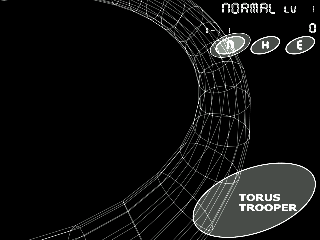 Racing games have been around almost as long as videogames themselves have existed, so the variety between them and the numerous sub-genres that have appeared isn't surprising. What is a little surprising is how few examples of some of these sub-genres there are. Take tunnel racing games for example. How many have you played? STUN Runner is an obvious example but the most time I've spent pelting down tunnels has been while playing the awesome F-Zero X. Now, however, courtesy of indie developer, ABA Games, we have another opportunity. Whilst more of a shoot 'em up than a racing game, Torus Trooper is nonetheless a game that sees the player charged with flying down a succession of pipes and tunnels at insane speeds, but to what end? Who knows but I'm interested already! 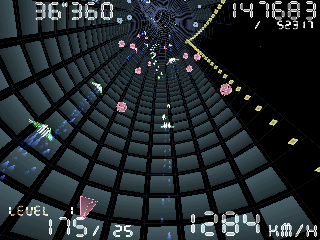 As far as I can tell there's no backstory here. Upon starting the game you'll find yourself in control of a small white ship which is confined to the first of many tunnels. Hurtling towards you are lots of similar, and apparently quite aggressive ships which it's your job to separate into their constituent parts. Forwards and backwards accelerates and decelerates your ship accordingly while any button unleashes a continuous stream of fire. You have a set quota of enemies to destroy within a time limit before a larger boss ship appears. Destroying this gives you either 30 or 45 seconds more time and takes you to the next level where the same process awaits. You also have a score quota and meeting this gives you 15 seconds extra. The enemy ships will send millions of bullets zooming down the tunnels towards you too, of course, and destruction of your ship will result in a reduction of speed and a 15 second penalty. Run out of time and it's game over. 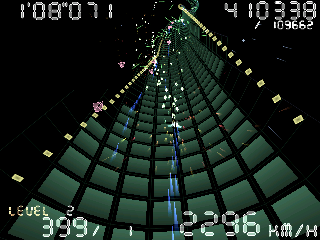 As with many indie games, the premise is kept simple. The biggest appeal of Torus Trooper is its impressive graphics and the speed with which it shifts them around. The tunnels and most of the sprites in them look like they're made of glowing neon vectors with polygons filling in the gaps and there's no backgrounds at all, but the speed at which everything moves is most impressive indeed. Flying down tunnels at 4,000 kph with pink bullets and the debris from the ships that fired them flying past you is quite an experience, and it's accompanied by a decent techno soundtrack which suits the game well. It plays a bit like a cross between an even more intense version of Tempest and the aforementioned F-Zero X. It's a more limited and repetitive game to play than both of them, especially for long periods, but due to its immediately accessible nature, not to mention its fast and exciting gameplay, it's also well worth regular visits.

A special thanks goes to Facebook friend, Ben Ford, for bringing this splendid game to my attention.
Posted by RetroKingSimon at 22:21