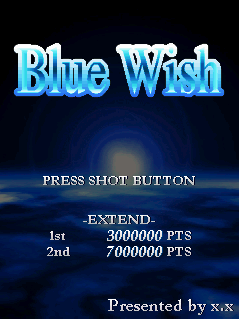 Hooray, it's time to look at another doujin game! I've been greatly enjoying the ones I've found so far and here's another one I stumbled upon by accident. It's actually one of several games offered by a Japanese individual or group who call themselves X.X Game Room and, accordingly, all information I've found about the game, including any kind of story or set-up, is in kanji. However, as with most shmups, this isn't enormously important anyway. Like most of the games offered by the splendid fellow(s) at X.X, Blue Wish is a bullet-hell style vertical-scroller. The first thing I noticed when it loaded was that its display options are rather limited - it either plays in a very small windowed mode (the same size as the screenshots here) or a 'full screen' mode which is only about two or three times bigger than that. 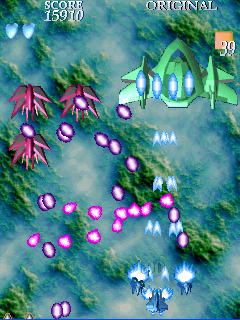 It's certainly playable with the latter option though and it doesn't take long to get stuck into the action. There's a pretty thorough options screen where you can change various settings (including the colour of the bullets), and then there's a choice of three difficulty levels - Heaven, Original, or Desperate (as you can see from the screenshots, I took the middle option). Your last choice before starting the game proper is which of the two (initial) fighters you want to use - Blue Wish which has a wider shot or Blue Hope which shoots straight ahead. Both ships will concentrate their fire forwards if you hold the fire button for a few seconds anyway so Blue Wish, the ship in the shot to the left here, is my preferred choice. Whichever you choose, however, it's now time to shoot stuff up! 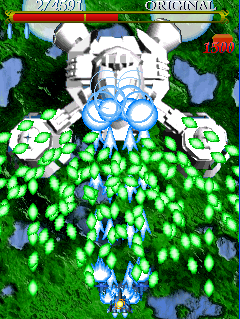 The game is comprised of five stages which take place over varied terrain. Each is increasingly filled with varied enemies and ends with the usual giant boss ship. All enemies are bigger than your own ship, with many being far larger, and the extent of their offensive abilities is to unleash an unholy number of large, colourful bullets - not just in your direction but all over the screen! Your ships can produce a decent number themselves though and can also deploy a limited number of powerful smart-bombs. Destruction of enemy ships is met with showers of tokens. Collecting these, which come in many multiples, boosts your score considerably. Also appearing now and then are P's which power-up your shot, B's which award you with an additional bomb, and the rather less common 1UP. 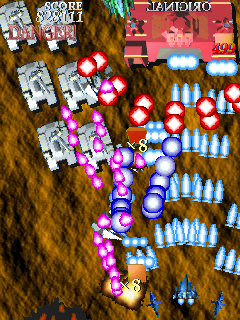 Other the the seemingly-limited display option, Blue Wish is a fairly pleasing game from an audio/visual perspective. The sounds effects are solid and well-suited to the game and the music, as far as I know all original compositions, are superb pieces. The landscapes are little more than repeated patterns but they're nicely drawn and are varied from stage to stage. I particularly like the first one which looks like a forest canopy covered in an early morning mist. The sprites aren't hugely detailed but they do get pretty huge in size! You won't get many chances to admire the sights though as the screen is almost constantly awash in a sea of colourful (and surprisingly large) bullets! Most of them move pretty slowly though and the hitbox on your ship (the part that registers damage) is quite forgiving. 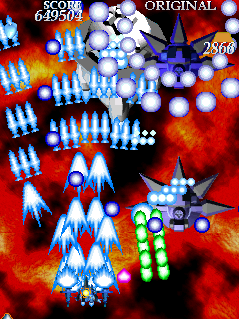 It's actually not overly tough going for a bullet-hell game and this is partly thanks to the fact that collected power-ups are dropped at the point of death and can be recollected when you resume. There's also an 'auto bomb' feature. This is a handy option which sees your ship set off a smart-bomb automatically the instant before it's hit by an otherwise-undodged bullet or enemy. Many shmups come with screen-clearing bombs of the sort found here of course, but let's face it - we often press the relevant button a fraction too late and end up dying anyway, so it's a mighty helpful feature which works really well and helps make Blue Wish less insane than many similar games. It's still pretty hectic of course, a quick glance at the screenshots reveals that much, but as well being fairly accomplished from a technical point of view, it's also very tense and satisfying game to play. So, a big thanks to X.X Game Room! The talent and creativity of these dedicated fans never ceases to amaze me and, despite being a little rough around the edges, this is another fine example.