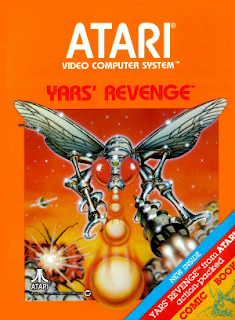 Amusingly, for a self-professed retro gamer, my experiences of the console often considered the retro console - the Atari VCS (or indeed 2600) - are rather limited. I had one friend at school who had one and I have vague memories of playing a few titles on it (including the splendid Frostbite), but that's about it. I did take a look at a few titles here at Red Parsley a while back for an 'Exploring' feature but it's taken me until now to get around to having a look at some other games properly. The first one I chose, as is probably fairly obvious by now, was Yars' Revenge - a decision based purely on the fact that I've heard of it (rather a lot, in fact), but I hadn't played it prior to this review. Looking into it now reveals that it's the work of the infamous Howard Scott Warshaw, later responsible for the game that came to symbolise crap games everywhere - ET. It was also originally intended as a conversion of the Cinematronics arcade game, Star Castle, but it was soon realised such a conversion may be beyond the humble VCS. The result was this original and exclusive game which soon became known as one the best on the system. 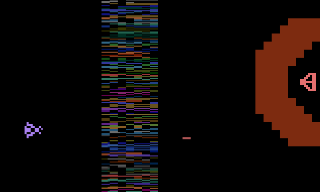 I can't say I've encountered a Star Castle machine over the years though, so I won't know how similar Yars' is, but it's always looked like a distinctive game from the screenshots I've seen. As was typical of early games of this type, everything has been given a scary 'alien' sounding name. Indeed, the object of the game is to destroy the 'Qotile' which occupies the right edge of the screen and is protected by a shield made up of an arch or a shifting rectangle alternately. Aiming to penetrate these barriers is Yar, an insectoid creature who's capable of firing an 'Energy Missile' which can destroy the Qotile's shield one 'cell' (i.e. pixel) at a time. The energy missile isn't enough to take out the Qotile though - that requires the 'Zorlon Cannon'. For this, Yar must either touch an exposed Qotile or eat one of the cells of its shield, either of which sees it appear on the left of the screen. 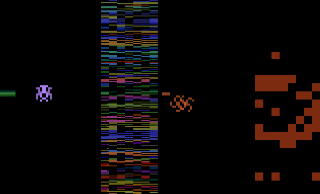 Yar can roam the screen freely and can travel in the usual eight directions. Once the Zorlon Cannon has been summoned, it moves up and down the far left of the screen mirroring Yars' movements which means once you fire it - get out of the way quickly! A direct hit will destroy the Qotile in a flashy explosion, and then it's the same thing again! The strangely-named thing isn't defenceless though - it fires a 'Destroyer Missile' as soon as a stage starts which follows Yar around very slowly. Luckily there's a 'Neutral Zone' down the middle of the screen which allows you to hide from this. The Qotile also fires 'Swirls' periodically as well and, in addition to homing in on Yar, they're also much faster and can only be destroyed by the Zorlon Cannon. Luckily, however, if he (or it?) moves off the top or bottom of the screen, he'll reappear on the opposite side. Very handy for avoiding stupid Swirls! 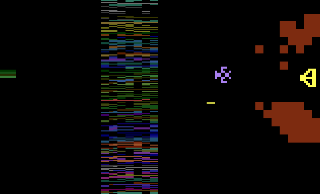 There are eight game variations to choose from. Six of these offer three difficulty settings with progressively faster enemy shots for one or two players (alternately) while the remaining two comprise the ‘ultimate’ game of Yars’ in which you’re required to obtain five ‘Trons’ (units of energy – just eat a shield cell or touch the Qotile as normal) before the Zorlon Cannon will even appear. They certainly don’t offer a dramatic amount of variety but it’s still enough to keep you occupied for a good while. The graphics and sound are good – the colourful neutral zone is constantly shifting and the rumbly background ‘tune’ is atmospheric too – but it’s the challenging gameplay that really makes Yars’ stand out. It seems simple enough to start with but the enemy shots get faster and faster and you’ll soon find yourself flitting about all over the place just trying to pop off a shot of your own. Over and over again. As addictive as any VCS game I’ve yet played.