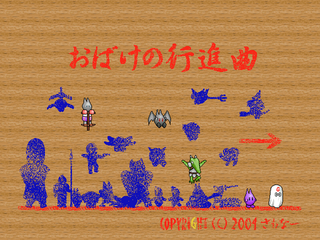 During my occasional searches for more doujin goodies to try out, it often doesn't take much to pique my interest. With this title it was a mere glimpse of the unusual looking main character, or what I had immediately assumed was the main character at least - it may be tough to tell from the screen shots but he's a curious-looking white ghost similar to one of the pesky examples found in the original video game haunting ground: Pac-Man. Except he's white, as is more traditional for ghosts of course. Although having said that, he's not actually a ghost but a type of spirit called an 'obake' which means 'thing that changes', and was the star of his own manga, and later anime show, called Obake no Q-taro which is a rather Doraemon-ish offering from the same era (60's and 70's). The character in this game, whose title means 'March of Obake', incidentally, doesn't look much like the original though.

However, I think it's more the general concept that has been used here rather than being directly based on the manga or anime, and that concept is a rather spiffy one. At first the game appears to be no more than a standard, side-scrolling platformer. It consists of seven worlds which are each divided into several stages with a boss guarding the exit of the last. Q-taro, for that is the name of our heroic spirit, hovers through each at ground level with the object of reaching the exit. He has an impressive jumping ability but no means of attack or any other talents save for one - he can 'possess' enemies. To do this he merely has to jump on top of one, thereafter inheriting their appearance, health, and abilities until such time as he loses all his host's energy which sees him revert to his ghostly original form. Using the enemies in this way isn't just a handy way of dishing out the hurt either - it's actually necessary to finish even the very first stage.

Accordingly, most of the enemy creatures you'll encounter have unique abilities you need to take advantage of. The first stage, for example, features one type which hops around on a pogo stick enabling it to jump much higher than other enemies, or indeed Q-taro himself of course. On the second stage you'll find green bird things who throw boomerangs which are required to smash down barriers. The third stage features bats who can flutter about for a short distance. Pretty much all of the peculiar characters offer something that none of the others do and it's this that makes Obake such as appealing game. Many of the enemies look like some sort of small Totoro-like creature but their abilities and behaviour are quite varied. Some just wander around doing their thing while others home in on you and attack but it's always interesting to discover a newcomer and possess them for the first time. I defy anyone to not be enthused by the discovery of an electric monkey!

It's even possible to possess creatures much larger than Q-taro such as the angry bipedal pigs you start to encounter towards the end of the first world, but care should always be taken when near them or any other enemies as they quickly reduce your energy reserves. They get quite numerous as you progress through the game too, and they always regenerate if you scroll the screen back and forth. This is probably with good reason for once though - if you need a particular creature to pass a certain point and you lose it, you'd be in trouble if it was the last one. This way, there's always an endless supply of potential hosts available. Having said that, it also makes the margin for error close to irrelevant and accordingly Obake is a pretty easy game. The main cause of lost lives here, as with many other platformers, is falling off the bottom of the screen which is quite easy to do, but you start with a decent amount of lives and more can be collected during play, either by collecting a hundred of the swirly white things that litter the platforms (and air) or by finding the much rarer sparkly extra life icons themselves.

On top of all that, extra energy is also fairly prevalent and the game automatically saves your progress after each stage too, but the further you get into the game the more traps and hazards there are to overcome such as dropping platforms and twirly lasers, and things start getting rather puzzley as well with switches, multiple routes, and numerous warp doors as well. The graphics are pretty high-res including some rather cute characters but otherwise have a bit of an MS Paint feel about them at times, but it's still outstanding stuff for a free fan-made game. There's a surprising amount of variety for a game of its type including some bonus rooms and secrets, and the music is fantastic. I was expecting Obake to be a simple, short, fun, ten minute diversion, but it has more depth than is initially apparent, there's hours of play in it, and it even has a dash of originality too. It might not be to everyone's taste and it may be a little obscure but I've really enjoyed playing this charming little game which comes highly recommended if you're a fan of the genre. 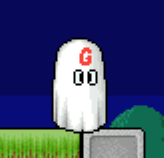