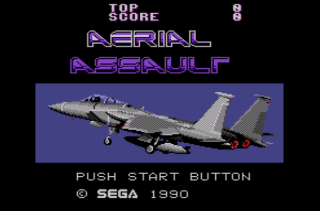 The poor old Master System had a bit of a tough time. Few could argue with its splendour but it was hardly awash with original titles, especially those of an arcadey nature. Those that did arrive were usually from Sega themselves and were sometimes based on currently-popular titles by their rivals. One of these is Aerial Assault which is a side-viewed military-based shooter. At first glance it could well have been influenced by any number of other games, and that includes its story which introduces your adversary as N.A.C., an 'evil militaristic organisation' who have developed a laser emitter capable of destroying the ozone layer and in so doing 'cast a shadow of fear stretching to the far corners of the Earth'. As well as their fancy laser, the N.A.C. are also packing a formidable military which eventually defeats all the nations of our proud planet. Then, in the far-future of 1999, a mysterious lone fighter appears... 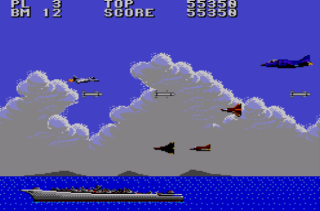 Helpfully, the N.A.C. allow you to choose from three difficulty levels before taking on their forces which are spread over five horizontally-scrolling stages. Your aircraft starts off with a meagre forward shot and a finite supply of bombs (not the usual shmup-style smart bombs though). The enemy airborne forces consist of waves of jets similar to your own as well as larger examples, and choppers. The ground forces are nearly as numerous and include ships and submarines over watery areas, and guns, tanks, and jeeps on the land. Most can be taken out with one shot or bomb but there are a few larger craft about which take a bit more punishment. Some of the smaller enemies release power-ups when shot which wibble about making it hard to grab them. If you manage it they can offer a speed-up, a temporary shield, more bombs, bonus points, or several weapon upgrades including three-way, six-way, eight-way, and directional shots, fragmenting shells, and missiles. 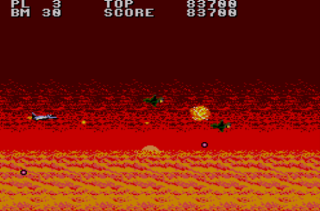 Even your default gun takes out most enemies easily enough though, so the main reason to collect a different weapon is to increase the range and/or fire-rate. Each has its advantages and disadvantages - the six way shot, for example, obviously covers a decent amount of the screen but the trade-off is that it fires slowly. My favourite weapon is probably the missiles which have a very poor range but also fire very quickly and move up and down with your fighter after being fired which means you can use them on ground targets as well as the airborne oafs. Despite this and a couple of other tiny new ideas (like mine-laying choppers) though, it's all very familiar stuff as you may have guessed. The enemies are quite numerous and pump out a reasonable number of bullets but they, like most things in the game including your own fighter, are quite small so they're fairly easy to avoid. 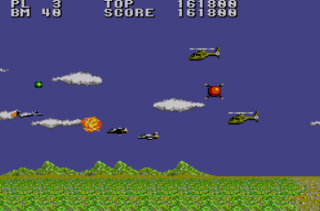 The bosses predictably take the form of larger normal enemies. The first is a sizeable naval ship festooned with guns turrets and the second is a large bomber, for example, and they're each joined by a continuing flow of smaller enemies, but none of them are remotely intelligent. They follow pre-determined movements and patterns so, once you've practised a bit and discovered your preferred weapon, it doesn't take too long to conquer all five stages on offer here. Whether you'll want to persevere or not is another matter. The graphics are pretty average with small sprites, poor explosions, slow scrolling, and unspectacular weapons, although some of the backgrounds are decent (if unoriginal) and there's not much in the way of flicker, and the audio is similarly average. Both accompany the action well enough, the biggest problem here is the generic gameplay which appears to have had little effort put into it. 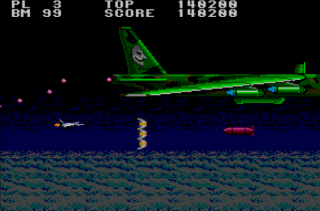 As mentioned back at the start of the review, Aerial Assault is seemingly based on another game and indeed, shortly after I started playing I was quickly reminded of P-47. It features more modern military hardware but is otherwise very similar in style. Then, as I advanced past the first boss I was greeted by a stage that initially looks nigh on identical to the distinctive sunset-drenched equivalent in Jaleco's game, complete with the barrage of missiles from beneath the clouds. Even your craft is called the Freedom Fighter for heaven's sake! Oh well, it's not like Aerial Assault was the first shameless rip-off, it's just a pity that it's not a particularly good one. There's nothing major wrong with it, it's just not memorable or exciting either. It's a bit like a horizontal version or Bomber Raid really - neither is original or special in any way but there's not too much in the way of alternatives on the MS either.