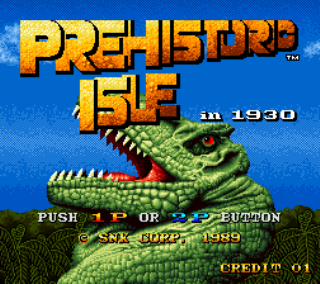 There really have been too few games to take in the mysterious wonders of the prehistoric world in my opinion. Sure there are a few platform games like Toki and Chuck Rock, but not much else which is a shame. All those lush primeval landscapes, plants, and enormous scary creatures beyond count could've made for some mighty enjoyable adventures. But wait... on the horizon, something's coming... it's SNK to the rescue! Indeed, and far from providing another platformer, they have actually bestowed upon us a shmup that allows us to blow the crap out of all those mysterious wonders of a bygone age! On further investigation, however, it turns out it's not actually set in said bygone age after all but in 1930 (I guess the clue should've been in the title) whereupon the good old US government has sent an expedition into the Bermuda Triangle to investigate the disappearance of many ships over the years only to discover an 'uncharted landmass' which they name Greenhell Isle. Slightly disappointing, then, to find it's not a 'genuine' prehistoric game, but it still has the potential to feature a shedload of cool stuff. 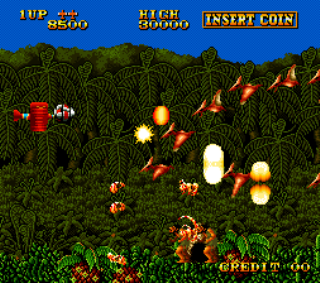 And once we're treated to a short intro and a quick look at the island (which looks like a green-backed bug), we do indeed get to see some of this cool stuff. There are five stages in total - you'll start off in the densely packed Forest before moving onto Airborne, a high-altitude flight across Greenhell Isle, On the Ground, a dangerous canyon, Bottom of the Sea, which sees you dip into the Atlantic, and Underground, the scary volcanic caverns beneath Greenhell. To hasten your journey through these side-scrolling locations you've been given a handy red biplane (which apparently doubles as a submarine) which comes under immediate siege from the hostile native life. The most common aggressors are the pterosaurs which come in various shapes and sizes, with the smaller ones usually attacking en masse in formation, but there are also other types of airborne enemies, land-based creatures including ankylosaurs and annoying things that can grab your plane, ichthyosaurs in the watery sections, and even cretinous Neanderthals who not only leap from the landscape onto your plane, slowing it down, but can even somewhat improbably be found in the air, hang-gliding from giants bats! 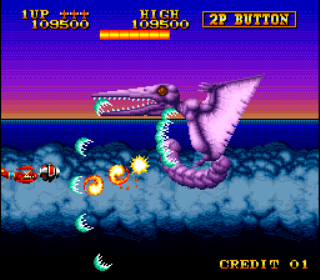 Many of these interesting-but-deadly creatures can shoot fiery projectiles at you (somehow) but generally pose much more of a problem simply by being there, flooping around the screen and getting in your way. Any of them can down your plane with a single touch (except the stupid cavemen who are just annoying - typical), and there are unsurprisingly much tougher boss creatures as well. Some stages have mid-bosses as well as end-bosses and they are of course all much larger and scarier. They include a brachiosaurus (an uncharacteristically malevolent one too), allosaurus, archelon, tyrannosaurus of course, and many others. They all have the luxury of energy meters and to wear them down you'll need a little more than your rather slow biplane with its weedy cannon. To that end, stages also feature an abundance of hovering eggs; even these things will kill you if you crash into them but shooting them reveals one of several icons including much-needed speed-ups, cash for bonus points, a temporary shield, or that all-important cannon power-up. 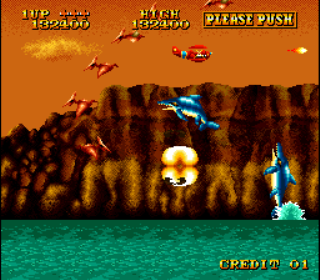 Collecting this adds a drone to your arsenal which can be rotated around your plane (anti-clockwise only). Not only does it whirl around but it fires different kinds of shots depending on which direction it's positioned too. Point it straight ahead and it combines with the standard cannon to fire a more powerful shot, move it behind you and it drops mines, straight up or down fires a wider fiery beam, either upper diagonal position fires energy spheres that bounce off the scenery, and either lower diagonal position drops bombs. Despite all these configurations, it is just the one weapon, and it's the only one in the game too, so luckily it can be powered-up several times. Reckless whirling isn't advisable though, as the drone is more delicate than a crystal flower and will be lost if anything touches it (which even seems to includes air molecules at times) reverting your weaponry back to your little pea-shooter, and if you should lose a life you'll lose all power-ups - a situation from which it proves very difficult to recover. 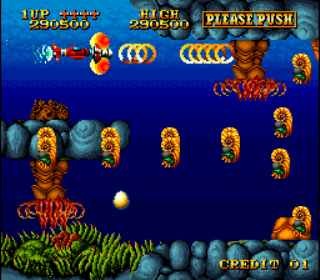 And as is the case with many shmups, that's Prehistoric Isle's biggest problem - an unbalanced and high difficulty level. Graphically it's a very appealing game. Though not always that detailed, the backgrounds are each very distinct from one another and feature some superbly chosen colours, but the stars are unsurprisingly the various creatures that make up the roster of enemies. I'm no palaeontologist so I can't say if their behaviour is typical (though I suspect it's not) but they sure look nice - each time a new one is introduced you'll probably spend too long looking at it and get knocked out of the air! This is particularly true of the bosses which are big and lively. Each battle is preceded by a stats screen showing the dino's size and weight but they've usually already started moving around by then! The largest ones often feature segmented sections consisting of several separate sprites (such as the neck of the brachiosaurus) but the effect works pretty well. The sound is slightly weaker with average effects, but the music isn't bad. 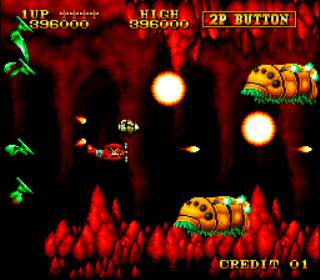 It's that difficulty level I have an issue with though. A big part of the problem is the whole weapon system the game employs. The rotating drone wasn't invented with this game - it's been done numerous times before and since, but this effort is the weakest example for me. Even worse is that its versatility means there aren't any other weapons available. SNK have apparently assumed that you'll always be equipped with it too, and accordingly the screen is filled from all sides. The main problem with this is the slow and clumsy way the drone moves and its ultra-delicate nature. In most cases you will basically have to already have it correctly positioned before the relevant enemies appear which means a lot of time needs to be spent memorising each stage and the attack patterns on it. I know that could be said about many shmups to some extent but it seemed particularly irksome here. The stages are generally quite interesting (although the second one is very short) and are populated by pretty splendid creatures, but I'm not sure I want to spend that much time honing my skills (or memorising stuff, as the case may be). 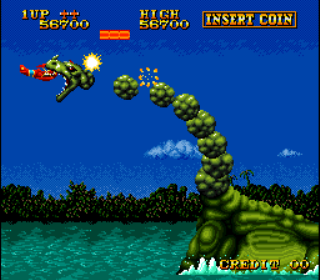 I also never really found myself trusting the collision-detection - trying to navigate small gaps or weave through a grouping of enemies and/or bullets - among the most basic of shmup tactics - often results in a fiery death here, even when it looks as though you should've pulled it off; plus, if you have the drone while attempting to do so (which you'll need), you're bound to lose it in the process. What we're left with, then, is an often frustrating and frequently unfair game. The setting and resultant enemies are fairly unique in the shmup world though, and definitely make the game an intriguing one, especially those boss fights which are quite tough but actually fairly manageable (until you reach the bloody stegasaurus at least), and often proved to be the highlight(s) of their given stage. If only the play-mechanics had been tightened up a bit, the whole game could've been really enjoyable throughout rather than alternating between that and frustration. Play it with a friend now and then for a laugh and see how far you can get, but it's not one to invest a huge amount of time in.