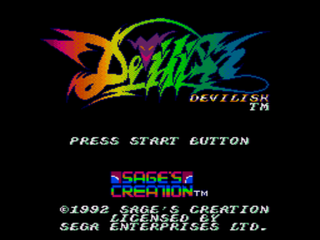 I must say, as I discover and play more and more bat 'n' ball games for this series of features, I am continually impressed by creative developers' attempts to come up with stories for them. I mean let's face it - how could there logically be one for a game of this type? That doesn't seem to stop them trying though, and that remains the case with Devilish (released as Bad Omen in Japan). Accordingly, it's set in the days of yore and features a nameless prince and princess who were happy and in love until a jealous demon turned them into... umm, stone paddles, obviously. Then, 'suddenly, a mysterious blue sphere fell from the sky' which allowed the price and princess to do battle with the demon and, presumably, regain their biological forms and continue 'loving' each other (giggity). It all sounds pretty ridiculous, of course, but it does mean we have another Breakout-inspired adventure to battle through which is great news! In theory at least...

This particular example not only has a slightly unusual story but its stages are a bit different to the norm as well. There are seven of them in total which may not sound many for a game like this. Unlike pretty much every other example I can think of, however, the stages here are not each limited to a single static screen but are scrolly instead. The start of each will look familiar enough but once you've destroyed enough bricks the play-field will scroll, either upwards or sideways, bringing some more onto the screen - a process that is repeated several times until you reach the end of the crowded stage. Also unlike similar games, the object here is not to destroy all the bricks either - you just need to destroy enough of them to reach the end where a 'hole' awaits. As if it wasn't already obvious, there are flashing arrows here indicating the hole as a target. A good aim in that regard will finish the stage. Unfortunately, lurking shortly before that point is a suitably demonic boss - eeeek!

Another slightly unusual feature of Devilish, although a fairly obvious one if you remember the 'story', is the existence of two paddles, one sitting directly above the other. While that might well have been done before, the higher of the two paddles here can be moved up and down the play-field. Not only that but it can also be turned ninety degrees to the left or right which means you can play sideways as well if it takes your fancy! Though a moveable paddle might just seem like something else to distract you to begin with (and it can be a costly distraction at times), it can prove to be a great asset as well. For example, you can move the upper paddle up the screen straight after the ball becomes active and trap it between the bricks and paddle, hopefully leaving it to bounce around manically for a few seconds wreaking havoc. I defeated the initially-troublesome first boss in three seconds using this technique!

You would be well advised to stick to the traditional way of playing though, to begin with at least, for this can be a mighty tough game despite featuring the largest 'ball' ever seen in a bat 'n' ball game. Each stage has a time limit, for starters, and if it runs out (which it easily can on if you get stuck on a stubborn section) you'll have to start the stage from scratch. This can prove controller-smashingly frustrating if you're most of the way through a boss battle as you might imagine, especially since there are no continues! Even reaching the bosses can be an achievement, however, due to the construction of the stages themselves. They are named Graveyard, Clock Tower, Waterfalls, Air Passage, Seaside, Volcano, and Prairie, and each features thematic background and scenery graphics which includes passageways and often-rugged landscape either side of the play-field. This isn't the problem - it's actually pretty cool. The problem is the inconsistent speed of the ball and the unpredictable angles at which it moves after hitting the scenery.

When playing most games of this type you can predict where you'll need to move the paddle based on what the ball hits and at what angle but here that often seems random. The scenery is not always flat (like the rock faces in the shot above, for instance) so you might expect some awkward angles but even when hitting flat surfaces or the paddle itself it's hard to predict where the ball will go, and that obviously results in numerous lost lives. Before I grew accustomed to using the moveable paddle I wasn't even able to finish the first stage thanks to this problem but it will still catch you out now and then regardless of how much practise you've had. One thing that will help is the splendid two-player mode which allows each player control of one paddle each which means you can place them side-by-side, thereby greatly reducing the amount of available space for the ball to fall into! It's still a pretty damaging problem but it is the only major issue - everything else about Devilish is actually pretty good.

It's definitely an atmospheric game thanks to some great music, some decent effects, and a few snippets of deep 'n' growly demonic speech, and the graphics are particularly appealing to me. They remind me of numerous other MD games like the amazing Dragon's Fury and it's (unofficial) sequel, mainly due to the dark, patterned brick and stonework backgrounds, as well as the sprites that show up here and there which consist of bats, frogs, skeletal warriors, wizards, knights, demons, and trees to name a few. These heinous enemies don't actually damage the paddles or the ball but they can change the latter's path with their given attack (such as fireballs) so it's fortunate that they can be destroyed fairly easily. Most features and enemies are exclusive to their stage, though, even including the bricks which are gravestones on the first stage, rocks/boulders on the third, etc.

Whichever form they take, some bricks need multiple hits to break, but there are a few bonus items too. There are numbered bricks for extra points and also an occasional treasure chest which release orbs when hit - blue ones extends the paddles for a short while, green has a smart-bomb like effect, and the red one turns the ball into a fiery brick-destroying dragon (or snake)! There's also the odd 'anti treasure chest' containing demons though, and red 'x' bricks which remove the second paddle for a short while. It really does seem like a lot of thought was put into Devilish which makes its issues all the more annoying. The stage layouts in particular are unique for this type of game, with its narrow passageways, alternate routes, and sideways scrolling parts in addition to the more traditional open, brick-filled rooms. There are some great ideas here and I really wanted to like the game - I'm confident it would be one of my favourite bat 'n' ball games if a bit more attention was paid to the ball movement. Sadly, however, this is a potentially splendid but flawed game.