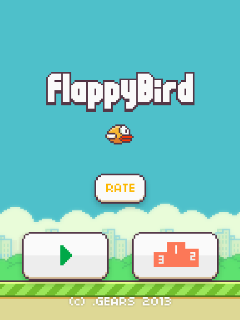 Aside from the odd flirtation, I've never really been too bothered about playing games on my smartphone. Consequently, many of the most popular titles drift by me largely unnoticed. One that I definitely did notice, however, was Flappy Bird. It was seemingly a rather popular game already, receiving millions of downloads during the short time it was available, but its developer, a Vietnamese gentleman called Dong Nguyen, thrust it immeasurably further into the limelight by abruptly announcing its removal from Android and Apple stores due to apparent guilt over its addictive nature. This is the point I first heard of the game - on the 'proper' BBC News website of all places! Soon afterwards I witnessed desperate pleas from fans for it to be reinstated, stories of how Mr. Nguyen had been raking in tens of thousands of dollars each day just in advertising revenue, and there was even news of people selling phones with the game pre-installed for hugely inflated prices. What on earth was going on? Could the game really be so amazing as to garner this much attention, even hysteria? I had no idea - I still didn't even know what kind of game it was at this point, but I decided to find this 'next Angry Birds' to see what all the fuss was about. 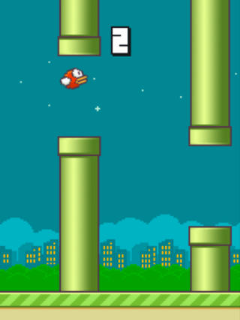 I suppose I should've expected it really, being a phone game and all, but it quickly became apparent that Flappy Bird is nothing more than a very simple screen-tapper. It's viewed from the side and stars an amusing-looking bird who, upon starting the game by tapping the screen, will attempt to fly to the right. He apparently needs prompting to flap his wings while doing this though, and will do so once each time you tap the screen. The object of the game is simply to guide him as far to the right as possible, through an infinite series of pipes which have gaps at differing heights. The more rapidly you flap the higher he flies, but the gap is not much larger than the height of one 'flap' which makes it easy to hit one. This predictably results in game over. And that is about it - a two second task repeated over and over for as long as you can. There's no music and the graphics, though appealing to a retro fan like me, differ only in their colour-scheme (and even then only slightly). So, it was a bit of a let-down for me. I like the name, I like the main character (or only character I suppose!), and it is pretty addictive, but is it really deserving of such a ridiculous amount of attention? Not a chance. Even for free, Flappy Bird is no more than an averagely amusing and/or frustrating minute-killer and nowhere near the titan I was expecting.

Special Note: if you are/were a fan of Flappy Bird and have been mourning its passing, you may have noticed a quite staggering number of clones appearing for near enough every type of device on earth (there's even one in the latest Pou! update). One that comes recommended by Red Parsley is Fly Chooky Fly - get it here for Android! (and probably somewhere else for one of those stupid Apple devices)