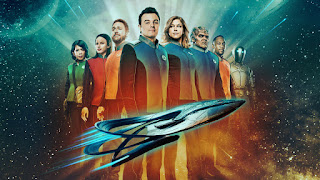 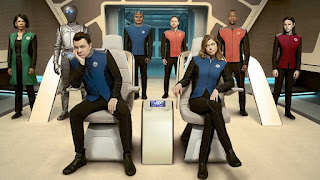 Unsurprisingly, he has modelled it on Star Trek. I'm not sure if it can be classed as a rip-off if he has been very open about the show's inspiration since its inception but the similarities are many and often blatant. I suppose that would make it more of a homage really but whatever you call it, I think a number of viewers have been a little surprised including me. It was looking as though it would be nothing more than a spoofy comedy version of TNG full of silly jokes and little else, but it's actually more of a drama judging by the two episodes we've had so far. There are jokes of course - it wouldn't be a MacFarlane production otherwise - but it's definitely not an out-and-out comedy. Being more of a dramatic show places certain demands on it though, so is it up to snuff? 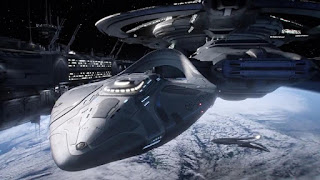 It's had received mixed reviews so far, with many firmly on each side of the fence, but I think I'm still undecided. There are a number of things I'm not super enamoured by personally - the acting is a little wooden on occasion, some of the characters aren't very appealing (so far at least), the jokes are hit and miss, and I was disappointed by the special effects, and indeed the production values generally. It actually seems more like a fan-made film/show to me, particularly exterior shots of the titular ship, its shuttles, space battles, gun fights, etc. While perfectly passable and occasionally impressive, the effects also sometimes seem a little... well, artificial. A silly thing to say, maybe, but the effects in the imminent Star Trek Discovery look amazing by comparison, although in all fairness it probably has a much higher budget too. 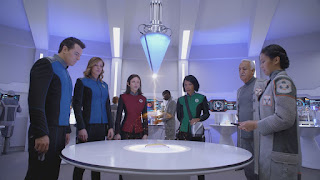 Perhaps I just need to get used to the show's style. Besides, I think I'm leaning towards the side of light anyway - I like some of the characters (like the petite-but-super-strong security office, Alara Kitan) and there is the potential for some really interesting stories. MacFarlane has the opportunity to build an entire galaxy of his own here! Some think his character a bit dull but I don't mind him. He's certainly no Patrick Stewart (though who else is?) but his deadpan style suits the show and he'll grow into the role as everyone else no doubt will too, and it looks like we've got some great guest stars coming up. It's not perfect then, but the prospect of a new Star Trek-style shows adds a lot of appeal by itself, even one as similar as this one. It's not like we've been spoilt for choice in recent years anyway! The question is, will it be overshadowed by the real deal which makes its (hopefully) glorious return to the small screen in mere weeks?