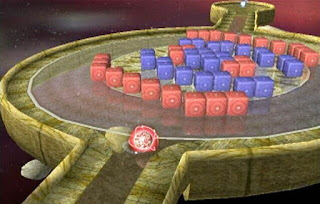 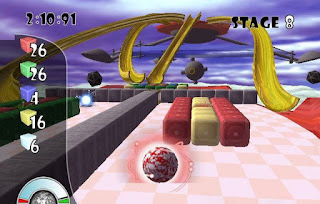 There are a crapload of stages as well - over a hundred, supposedly, set over a range of environments filled with all kinds of features, obstacles, and traps. It sounded like just the sort of game I would like. Sadly, as I soon discovered, it has an often-tight time limit which quickly ruined near enough all my enjoyment, especially since falling off the edge of a stage results in a rather large time penalty. On my first attempt I got as far as the eighth stage I think it was, but just couldn't reach all the blocks in time. This was therefore the extent of my progress. Stage eight out of at least one hundred. Grrr! That kind of thing annoys me - tons of stages but too tough to see even a fraction of them. Some slightly 'sticky' ball movement doesn't help matters either. If it wasn't for that bloody time limit I would probably enjoy this game as much as I expected to. Should I give it another chance?