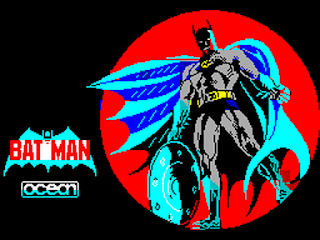 Pretty much ever since I first got (or was given - thanks mum and dad!) a Spectrum, one of my top five favourite games for it has been Head Over Heels. Not only was it a wonderful adventure in its own right but it also made me a fan of isometric games generally, so it's strange that it has taken me such an extraordinary amount of time to get around to playing this example. I've never really been a fan of the Caped Crusader in general but this, possibly the first Speccy title to bear his name, is one that has long been considered the spiritual predecessor of Head Over Heels. Both were products of the same ace two-man team of Jon Ritman (programming) and Bernie Drummond (graphics), so it's not too much of a surprise that they have a lot in common, and there are similarities in both the visuals and game design as well. 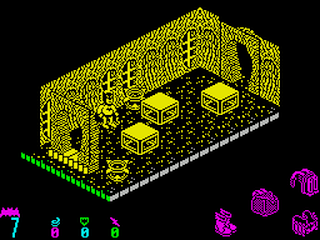 This gave me great hope that their earlier game - Batman 3D as it is sometimes known - would be a bit of a stonker. The premise is simple enough, unsurprisingly placing you in the flappy cape of the titular unsuperhero who has taken it upon himself to find the various parts of the 'Batcraft' which are scattered around the 'deadly catacombs' that make up his Batcave. I'm not sure why Batters would base his special cave in deadly catacombs, nor why his special craft would be in pieces, but he's the billionaire genius, not me, so I'm sure he has his reasons. Anyway, he needs it recovered and reassembled sharpish as that bumbling oaf Robin has been captured by the Joker and Riddler who may or may not be doing unusual experiments on him. To succeed in his quest of frankly questionable importance, the apparently-disorganised Batters needs other equipment too, which is also strewn randomly around his labyrinth-like base. 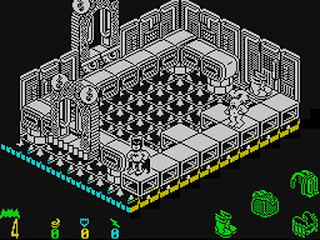 This base consists of an impressive 90-odd screens which are split into several sections. However, in true arcade adventure style, much of it is inaccessible at first, with many rooms having more than one exit. The first obstacles you'll encounter are raised doorways. These require the Batboots to access, as they grant Batters an ability that was strangely absent prior to that point - jumping! Later progress is granted once the similarly-useful Batbelt, Batbag, and Bat-Thruster (giggity) are obtained. Traps and enemies are unsurprisingly ultra-plentiful too, and are found in near enough every room to varying degrees. Bat-face has no means of attacking any of the strange creatures that pootle about the place either, so they must be avoided like the traps instead. Happily, our flappy hero does get a little help in the form of temporary lives, shields and speed-ups and stuff, but that's about it.

As with many games of this type, there are plenty of cheap or unfair deaths and progress is very much on a trial-and-error basis, but like Ritman/Drummond's later game, the appealing monochrome visuals, chirpy sound effects, and superb design make it such a charming game you'll want to keep playing no matter how many lives you lose (and you get quite a lot of them too). As a Batman game it's not so great I suppose. My knowledge of him and the accompanying mythos is limited, but even so, I think I can safely say none of the locales or enemies here have anything to do with his comics or films. Happily, that doesn't matter. The main character and objective could've been pretty much anything and it still would've been an enjoyable and addictive game whose tricky puzzles and challenging enemies will keep most players busy long enough for Robin to die tragically of malnutrition.

Gameplay Video: here's a video of the whole game being played by one of the talented fellows at RZX Archives (check out their great channel here). Oh, and don't watch if you want to avoid spoilers!