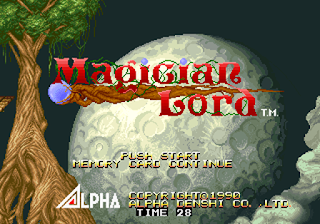 Although the Neo Geo is generally known these days for its one-on-one fighting games, shoot 'em ups, and perhaps also the skillish Metal Slug series, the first run of games for SNK's powerhouse was actually a bit more varied. One of the many standout titles was Magician Lord, a shooty-platformer which takes place in a probably-ancient land called Cadacis which has become consumed with chaos and evilness again after many years of peace. This is all down to a foul sorcerer known as Gal Agiese who has escaped from his magical prison and wrought havoc upon the land. The only hope for the fair people of Cadacis is some guy called Elta who is apparently the 'last descendant' of the much-fabled Magician Lord of old who previously vanquished the heathenous Gal Agiese and his demonic buddies. Quite why he's the last descendant, though, I don't know, maybe he's impotent. 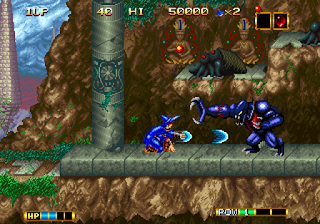 Elta's objective is to retrieve eight magical tomes which Gal Agiese intends to use to summon a scary demon named Az Atorse, and this unsurprisingly means there are eight stages, with each tome being held by successive stage bosses. These stages are mainly platform 'n' laddery in nature and located predominantly in creepy caverns, dungeons, castles, and... what are evil versions of castles? Fortresses of doom, perhaps? Whatever you call them, they and all other areas are awash in ghastly nightmare creatures and undead monstrosities beyond count. Yes, that means they respawn, annoyingly. Well, some kinds do - the most numerous kinds, obviously! Luckily, being the descendant of the Magician Lord means Elta is capable of some mystical floopy stuff himself, notably being able to transform into several other forms, although his original form is the only one that looks wizardish. 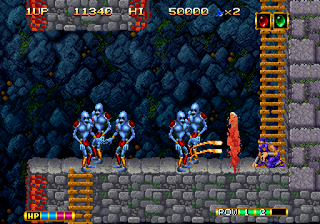 This could be due to his blue outfit complete with cape and pointy hat which is suitably wizardy. In this form he can shoot blue wave shots but it isn't long before you start finding treasure chests. Contained within these are many wonders which can power-up your shot, replenish your energy, or give you various bonus points, but more importantly there is sometimes one of several coloured orbs. Collecting one of these will transform Elta into one of six other forms depending on the colour. These include Shinobi (a ninja) or Samurai, two types of watery guys called Waterman and Poseidon, or an electrical guy who can jump really high called Raijin, but probably the coolest one is the first you'll encounter - Dragon Warrior - a red, horned monster who breathes fire! It's easy to lose these new forms though. 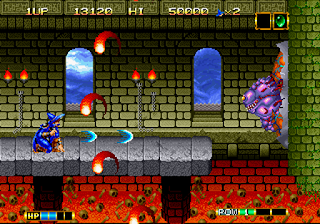 Elta has an energy-meter which, on default settings (it can be adjusted) gives him two hit-points. Collecting a magical orb gives him two more in addition to whichever new form the orb bestows, but if he takes two hits he will revert to his normal form. It's a pretty tough game too. You get two lives but the only way to replenish your energy is to find a treasure chest with the relevant item. It isn't even refilled when you beat a boss and start the next stage. Oof! It's very easy to take hits too, particularly from the many flying beasties. Most of the enemies spit bullets at you but the goddamn flying fucks spit them down at you which makes them harder to avoid, and the stupid flappers usually arrive in twos or more as well. On top of that, I also discovered to my sorrow that there's an unseen time limit and when it expires a giant undefeatable monster descends from the heavens and drains all of your energy. 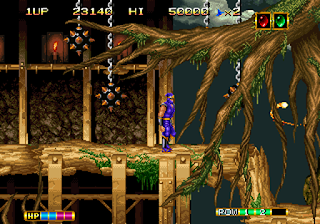 I know arcade games generally are tough but I can't see myself ever completing this. I was going to say that it's basically SNK's version of Ghouls'n Ghosts but I could at least get to the end of that notoriously tough game. This one? The third of the eight stages is the best I can manage without resorting to drastic measures, although my skills aren't what they once were, admittedly. I guess it's just a case of practising more though, and hopefully getting the relevant magic orb to turn into the electrical guy who seems to make the going easier, at least judging by the video below. Sadly, I didn't encounter that sparkly character but I was pleasantly surprised by the design of the stages in any case. I had assumed they would be mostly left-to-right jumping and shooting with the occasional ladder and that's it but they - or at least some - are a bit more complicated than that. 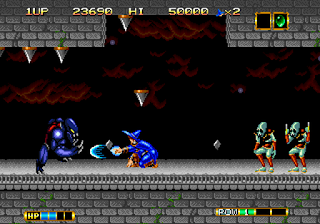 There is, for example, an explorey aspect to some stages - things can even get a bit mazey at times - and all the stages have a doorway (or several) that lead to new areas or mini-stages. These usually contain treasures but are also inevitably home to many enemies including the horrifying bosses. The enemies are a pretty varied bunch too. They range from things like lumbering skeletal oafs, serpents, stretchy-armed ogres and zombie soldiers to slightly weirder things like dapper frogs with tridents, kangaroo women, and organic versions of those floopy Sentinels from The Matrix. Most of the foul abominations are destroyed easily enough but some of the 'forms' that Elta takes have rather short-range attacks and most sprites are a decent size too which, as mentioned, means it's still pretty easy to take damage. 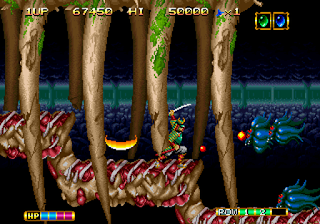 The audio/visuals are definitely up to SNK's high early standards for their swanky new console though. The sprites are nicely detailed, not to mention suitably demonic, and the scenery/backgrounds along with the music are atmospheric too. The animation is a bit hit and miss though, and the stages aren't hugely varied in their setting, but it's a nice-looking game overall with well-chosen colours and even some parallax here and there. The best thing about the game, though, is probably the design of the stages which are more interesting than most games of this type. I suppose it's a shame that the worst thing about the game means most players probably won't see many of those stages. Oh well, I'm sure it will still delight the hardcore players and it remains one of the Neo Geo's most iconic games. Still well worth a play if you can but you'll need a lot of practise to finish it.

Gameplay Video: here's a video of the whole game being played (without any music for some reason) by one of the talented fellows at World of Longplays (check out their great channel here). Oh, and don't watch if you want to avoid spoilers!