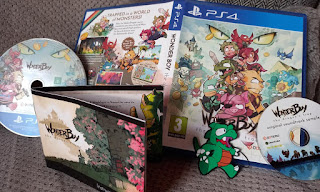 Any observant regular visitors here might remember that I've posted about this game before. Indeed, there was a preview and a review of the Steam version that I've had for many moons, but when a game is as wholly wondrous as this one, the prospect of a physical copy to keep for many ages of our world is a mighty appealing one. I had this PS4 version on my Amazon wishlist pretty much since I had the Steam version, and then, to my not inconsiderable delight, I received it as a gift for my last birthday! Its 'main' cover is typical of the lovely new artwork found in the remade game. It still looks delightful and I can now look at it whenever I want. But I soon discovered the game comes with a reversible cover, the other side of which features some nice, rather more CGI-ish artwork. Upon opening the case, however, there was something else I noticed before I discovered this alternative cover. 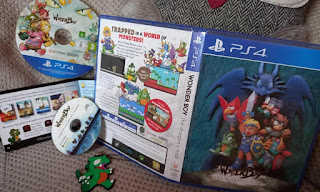 No, it wasn't a terrible scorpion. It was instead a number of wonderful treasure items! Besides the game disc itself there was a smaller soundtrack 'sampler' disc and that rarest of treats in this dark age we find ourselves in - an instruction booklet! It's small but it's a really nice one, with lovely illustrations as well as useful info. In addition to this, there is even a rubbery keyfob thing of Lizard Man! These things would all be ultra-skill even if the game sucked donkey balls but, as we all know very well, it's super-awesome in every conceivable way. I would even say I have enjoyed playing it through this time more than I did originally for my review; I've been more thorough, somehow even managing to find a couple of secrets I never knew about, and I've loved every minute. Again. It's a really nice package, indicative of the love that has gone into the game itself, and it's one I'm happy to now own twice.