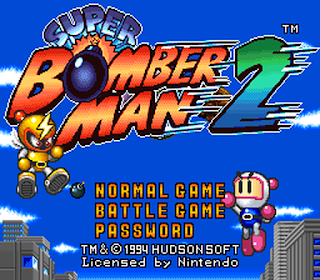 I was a big fan of Bomberman right from the first game of his that I played, namely Super Bomberman for the SNES, so it was a significant surprise when I found out years later that there ended up being four more games in the series! The fourth and fifth games were only released in Japan so I kind of have an excuse there, but the second and third ones? How did I not hear about them? I blame the pesky magazines of the day which must have failed to cover them. Yes, that must be it. Hmm, anyway, this of course means I've never played this particular Bomberman game before, nor any later games in the SNES/SFC series, which makes them among the few games in the traditional style I've not played. Happily, things looked very familiar from the moment I started it. There is of course a silly backstory to facilitate the action, this time involving the 'Five Dastardly Bombers' who apparently want to take over the universe - an ambition that has prompted them to take over five worlds. 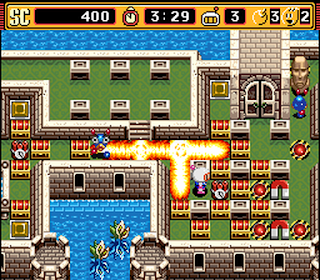 Actually, judging by the brief intro we get, it looks more like a space station with five themed 'habitats' or something. Whatever form they take, however, this does, as far as the 'normal' game is concerned at least, mean we have five themed worlds to blast through in the usual style before the idiotic cyborgs (for the 'Five Dastardly Bombers' are indeed cyborgs) are defeated. One of them guards the exit from each world which are divided into seven stages each - six normal examples followed by the boss battle, giving us 35 in total - much less than the first SNES game, surprisingly. They are packed full of new enemies and lots of new obstacles and features though, some of which are good, others less so. Naturally with a Bomberman game, there is also a Battle Game which offers a choice between the normal Battle Royal format or a tag-team battle, but either way there is support for up to four players and ten special arenas with unique features in which to engage in various explodey tomfooleries. 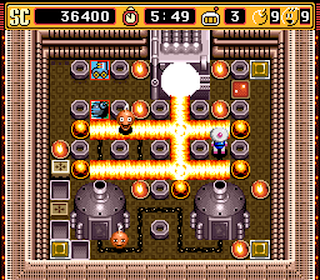 If you're anything like me though, you'll spend most of your time with the normal game. Unlike the first Super Bomberman, but like some of the BM games on other systems (Bomberman '94 on the PCE for example), the stages here are not simple, square grids a single screen in size. Well, some stages are one screen but others scroll sideways or up/down as well, and most of these are divided into several sections. The exit to each is always locked to start with and there are two ways to open it - either destroy all the enemies or blast all the 'capsules' which are usually in the furthest reaches of each area. Or of course you could blast the enemies and the capsules if you're a bit OCD-ish as I am (guffaw!). You might run out of time if you oaf around too much but the time limit isn't as strict as with some other BM games. The power-ups are just as plentiful as always though. Assuming my memory banks can be replied upon, there aren't any new ones this time around, but that's fine with me as the most important ones are all here including... remote control! Any but the bomb multiplier and range extender will be lost when you lose a life though. 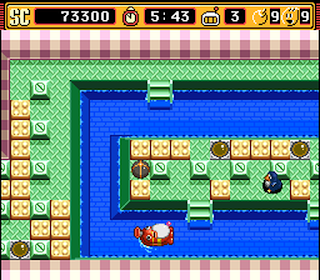 The themes are a little odd too. I'm not even sure what some of them are meant to be if I'm honest, and they don't have names to help determine that either. Well, the first one does (Old Castle) but they are all very distinctive nonetheless, and home to several hitherto unseen features, most of which can only be found in one world. The first, for example, feature magnets that pull bombs and bundles of dynamite that cause huge blasts; the second has furnaces that turn certain parts of the floor all fiery; the third has trampolines and cannons that fire you across the stage, and even a boat/sub to traverse some watery sections; the fourth has floaty moving platforms that allow access to other areas; the fifth even has darkened stages... unless you can find the light switch! There's certainly enough to keep interest levels up for the solo player but it is just for one player since, oddly, Hudson have removed the two-player option for this section of the game for some reason. 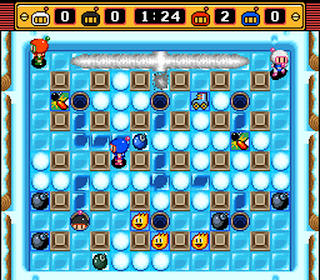 Indeed, for if you want to blow up your friends, it will have to be in the Battle Game which is just as much fun as always and remains among the SNES's finest multi-player experiences, but is also the only place for such amusement with this particular game. That's fine for pathetic loners like me who play games alone 99% of the time but it still seems like an odd change to make. Don't feel bad for me though, the Normal Game has plenty to keep me occupied. It may be the most challenging example yet, in fact. This is partly down to some of the objects/traps in the various stages such as the dynamite on the first world which is likely to catch you out once or twice to start with, but the most annoying ones by far are the goddamn hidden landmines on the last world. I think I lost more lives to these than anything else - grrr! Some of the boss fights can be a bit tricky too. These take the form of a Battle Game against whichever cyborg is resident in a given world. 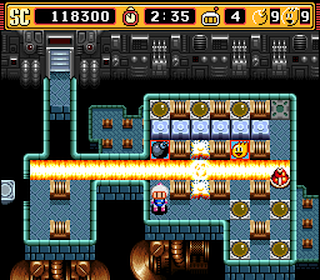 As anyone who has played a Battle Game against CPU characters can confirm, they don't make mistakes often! If you manage to hit them a couple of times, however, you then move onto the proper boss fight which is again the (apparently undamaged) cyborg, but this time inside a large contraption of some sort. There's nothing super-taxing here though, and SBM2 is basically almost everything a sequel should be - the graphics are improved and feature some nice details, colour and animations, the music is catchy and enjoyable, and the stages are more complex and challenging. The loss of a two-player Normal Game will sting for some and there's not really an excuse for giving the game fewer stages, even if some of them are larger and floopier, but overall, as I have very-belatedly discovered, this is yet another excellent instalment in the seemingly-endless Bomberman series. Not that I expected any different from the mighty Hudson. Have they ever put a foot wrong? We'll see soon(ish)!