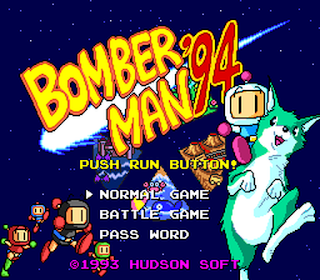 This amazingly awesome series had taken a detour to SNES-ville since its last PCE instalment but it was probably still its last entry on NEC's wonderful box of tricks that was considered the best. It retained the same basic gameplay as the rest of the series but the visuals, audio, and stage design were all better than ever. So much so, in fact, that it was hard to see how the format could be improved any further. That didn't stop Hudson from making a swift return to their favourite system to try though. Expectations would be higher than ever but initial impressions were very positive. Having said that, the link-up mode present in '93 seems to be missing from the title screen here but the more important 'Normal' and 'Battle' games are present and correct, and it's also hard not to notice a green kangaroo-like creature present here as well, being ridden by an excited-looking White Bomberman. What in the blue blazes could that be? I shall henceforth find out. 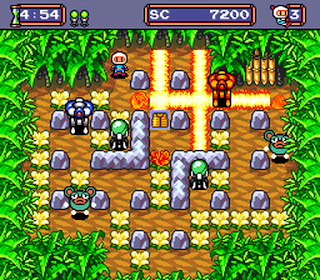 It's also hard not to notice Black Bomberman - the antagonist of the previous PCE game - tagging along behind the White Bomber/Kangaroo pairing, looking friendlier than he usually does and accompanied by several other colourful Bombermen, and indeed, we have a new bad guy to blow up this time. Namely, the evil Bagular (snigger), who with the help of his robot army has destroyed 'The Spirit Pictures' from which the Five Spirits who protect Bomber Planet draw their power. As a result, the beleaguered planet was split into five pieces, and only White Bomberman, along with his multi-coloured friends (and kangaroos, presumably), can save the day. This brave quest is set over six unique worlds. First you'll need to tackle the five varied areas of Bomber Planet - Jamin' Jungle, Vaxin' Volcano, Slamin' Sea, Crankin' Castle, Trashin' Thundra. These are each made up of four or five stages, the last of which is a boss battle. Then it's on to to Bagular's lair for the final world which only has two stages. 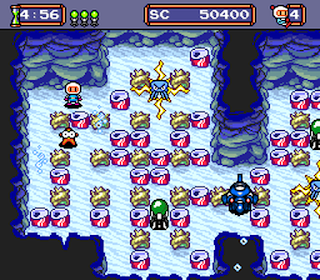 Very surprisingly, that means there are a total of only 26 stages here which is substantially down on the 56 stages found in Bomberman '93. Strangely, however, the game isn't much, if any shorter as the stages are now quite a bit larger as well. The first few are quite small as usual - the very first one is only a single screen in size - but later examples often consist of several separate scrolling sections, usually linked by doorways or tunnels. The power-ups are still most plentiful through the stages and they are all ones you should be familiar with. Occasionally, however, you'll find a large egg in the smoking debris of a destroyed soft block and these contain the aforementioned kangaroos, or 'Rooeys' as they're known. There are five of these, each of which is a different colour and has a unique ability such as being able to kick bombs over blocks or run at high-speed across the stage. This isn't the only way they're useful either, as they also act as one-hit shields too. 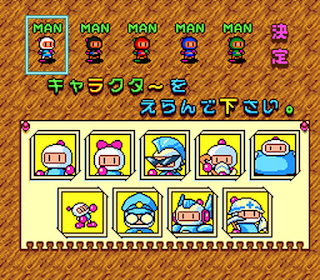 Of course, they will soon run away if you take a hit but you will find another quickly enough, and more importantly you don't lose a life or even any power-ups either. Mighty fine. As expected though, almost everything else about Bomberman '94 is very similar to the previous year's incarnation. The graphics are gorgeous once again - ultra colourful, highly appealing stages, and featuring tons of cute/happy enemies you'll probably feel guilty blowing up (as well as some fouler examples). The bosses are suitably weird too - there's a large, angry banana (being controlled remotely by a monkey, naturally) or a bipedal pyramid with rocket-powered fists, for example, and while they're not particularly tough to defeat, they certainly look the part! Unsurprisingly, the audio is also of a very high standard; perhaps the highest of all. As usual, we've got the standard effects and different tunes for each world as well as a boss theme and a few jingles, and they're all delightfully catchy. 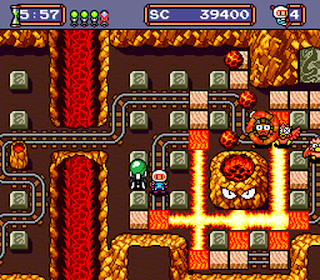 As with Bomberman '93, however, the most appealing thing about this game, for the solo-players at least, is the more interesting stage designs which are a continuance of the style started in the previous game. Here, they again feature obstructions like train tracks, rivers of lava, chasms, or large mounds of snow to work your way around, and it really does make the game more interesting. The stages here can get pretty big but they can be finished quicker if you like, as you only have to destroy the three pod tower things to open the exit rather than kill all the enemies. The mutli-player game is again superb too. There are some new characters that can be used here and the arenas, themed around worlds in the main game, are better than ever. There really is nothing bad to say about Bomberman '94. It's such a simple concept and yet Hudson somehow managed to keep improving on it with. Sadly, this was the last one for the PC Engine but it was one hell of a swansong.