It has been a while since I took a look at the wonder that is Star Control 2 - still my favourite of all time - but news that my good friend Luke had finally started playing it after 20-odd years of periodic urging by me had brought it back into my spotlight, and that means I felt inclined to burble on about it again. But what else is there to write about? I've already taken detailed looks at the various spacecraft, the story, and of course reviewed the actual game and its prequel, so what else is there?

Why yes that's right, I could take a look at the many alien races themselves! Okay, maybe it's just an excuse to post about my favourite game yet again but I think it's a pretty good one - seldom have I played a game with such a varied, eclectic roster of species. Many are perhaps not terribly realistic or even a bit gimmicky (a bit like pro wrestling around the same time, in fact), but they are appealing and memorable all the same. There are quite a few as well though, so I'll split this into several parts, the first two of which will feature the friendlier half of the roster...

Top Five Cars I Remember From My Top Trumps

They might not be videogames but I bet I'm far from the only one who spent a lot of time playing Top Trumps during my formative years. Perhaps their appeal came from their simplicity, with players simply comparing stats on cards featuring all manner of different themes. I had a good few packs, most of which featured motor vehicles of some sort - I had a Formula 1 pack, a rally pack; even trucks and superbikes. One pack was my definite favourite though, although I can't actually remember the name of it now. Sports cars, maybe?

Hmm, anyway, whatever it was called it featured some cracking cars through the deck - mostly sports and supercars from the late 70's up to about the mid 80's, and there were also some crazy customised 'normal' cars included - I particularly recall some insane VW Golfs - but there were a certain few cars that have become iconic for me, simply because of the game and how often I used to play it, usually with my good friend Luke who I suspect will also remember it well. Out of all the wonders included, these are the five that have stuck in my mind most firmly:


5 - Lamborghini Countach
This sleek black speedster looked more like a spaceship from some far-fetched sci-fi film back in the 80's and it moved about as quickly as one too! It was just as notable for us Top Trump players - whomever had this card held a big advantage for the rest of the game thanks to its amazing stats. As I recall, it was the fastest car in the whole deck at a mind-blowing 188mph. I don't think it was quite that fast in reality but it's still a highly memorable car for all kinds of reasons...

Despite the best of intentions, my experience of visual novels has remained fairly limited since I first discovered them a few years back. The few I have tried all seem to have some sort of pervy content too, and few more than this one. I think it aroused my interest (no pun intended) when I saw a few screenshots somewhere and liked its visual style. Upon playing it, however, I quickly found that it's premise was one of a highly questionable nature. You play as high school student Soichiro Nanase who lives with his parents and five younger sisters. The game takes place during the summer holidays at a time when their parents have gone on an overseas trip leaving the six siblings alone. This leaves you, as Soichiro, to pursue inappropriate relations with whichever of his sister takes his fancy.

Oops! I think after a strong and enthusiastic start from the six of us who collectively comprise Team Flicky, our film-watching exploits known as Flicky Flicks kind of went off the rails a bit. We were supposed to be doing a round per month, which might in retrospect have been a bit ambitious since we all have families and full-time jobs and all that, but it has been over a year since we started this round. Oh dear :(

Nonetheless, we are still kind of puffing along and this third round - the theme for which was sequels - was pretty much concluded just before Christmas for most of us (although it looks as though Dave (Grumpy McUnt) has now bowed out), but it has taken me this long to write my mini-reviews for each film. Oops again! Anyway, here are the films we chose - the winner will as always be revealed at the end! 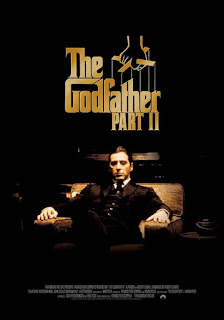 Following the violent conclusion to the acclaimed original film, this sequel picks up soon afterwards with Michael Corleone (Pacino) now firmly in place as head of the crime family bearing his name, but his life is becoming complicated, with an attempt made on his life and problems with new business arrangements in Cuba, while back home he is facing a government investigation into his family and related business dealings. As this is going on, a series of flashbacks shows how his father (De Niro) rose to power upon his arrival in the U.S. around 40 years earlier...

Read more »
Posted by RetroKingSimon at 21:03 No comments: