The mighty NES conquered all in its native Japan and the US and is understandably beloved by many. With a library of well over 1,000 games over all territories, it will take a huge effort on my part to feature them all here, but I'll give it a go, and since I never had an NES growing up, I'll be playing many of them for the first time. Up next, not counting text-heavy Japanese language games of course, is:

This military-themed single-screen 3D shooter was quite innovative for its day, and Rare did a good job with this conversion considering how little support they had, but it has never been a particularly appealing one to play, or even look at. Fans of the arcade original will probably find much to enjoy here though. 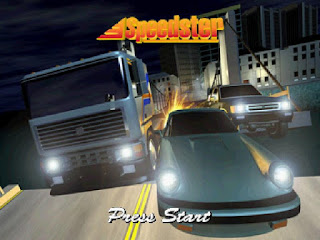 Racing games were a huge deal on the first few 32-bit consoles. The latest fancy 3D titles could help make or break a system, so why would you choose that time to make a crusty overhead-viewed example? They were relics from the ancient days, surely? Well, if you were going to do it, you should probably try and make it a 3D polygonal affair as well, right? That's what it looks like we have here anyway, although you could be forgiven when going through the various options screens that you were about to play a normal 3D 'behind the car' racing game. There is a split-screen two-player game, but solo players have the choice of Quick Race, Championship, or Time Trial modes. Then you can choose a car from two classes - High Performance or Heavy Metal - then choose a track, and away you go. Only, instead of being behind your car, the 'camera' seems more like it's attached to a helicopter above.

Read more »
Posted by RetroKingSimon at 21:40 No comments:

In typical fashion, I'm almost two years late with this one, for the games featured herein were actually received as Christmas gifts... the year before last! Oops! The fact that I've owned them for nearly as long as my PS4 itself, however, shouldn't be a reflection of the esteem in which I hold them - they are of course both valued and appreciated parts of my collection. Here's a quick look at each of them:

Yonder: The Could Catcher Chronicles by Prideful Sloth (2017) 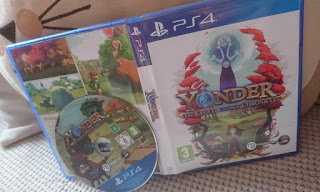 Like several of my PS4 games, this is one that was originally on my Steam wishlist, but the temptation of a physical copy was too strong. The game itself is a 3D adventure or perhaps an action RPG which ultimately charges you with ridding your land of an ominous shroud known as the Murk, but there are millions of quests that you can undertake too. There are some modern gameplay traits I'm not yet very familiar with, such as crafting, but the game world is a very appealing one filled with amusing animals amongst other things. I spent quite a while playing this during the Christmas break upon which I received it and eventually got stuck thanks to my old-fashioned gaming mind, but I keep meaning to come back to this lovely game. The package itself isn't great though - the case contains a disc and nothing else. 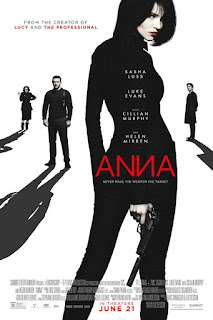 Basing an ass-kicking film or show around a female vigilante or assassin seems to be all the rage at the moment but Luc Besson has been wise to their potential for many moons now. His latest effort is perhaps his most blatant since La Femme Nikita back in 1990 and, like that iconic film, is named after its main character. As with the French junkie, despite being blessed with favourable aesthetic qualities, Anna (Luss) has not thus far enjoyed a life of glamour and riches. She lives a somewhat downtrodden life in a stinky apartment in Russia with her abusive dick of a criminal boyfriend, but when his latest scheme backfires she finds herself needing to leave town. Before she can do that, a shady guy called Alex (Evans), apparently a KGB agent, gives her a choice - work for them or else, basically! Shockingly, she accepts their offer of gainful employment upon learning she need only survive for five years before being freed from any obligations with a clean record. All she has to do is take out whomever they tell her to.

Read more »
Posted by RetroKingSimon at 17:54 No comments:

Whether you love Steam or hate it for some reason, no one can deny that it offers an incredible variety of games, including many obscure retro-flavoured titles that are very often cheap. One such title that caught my eye some time ago was Bibou by Portuguese coder André Bertaglia, and it was available for less than the price of a Cadbury's Creme Egg! You can probably see why it caught my eye too - those bright, chunky, pixelly graphics which are either awesome or ghastly depending on your outlook. I thought they looked pretty awesome so I decided to forego my daily chocolate egg and took a chance on this strange looking title instead.

Read more »
Posted by RetroKingSimon at 22:42 No comments: