I think we can safely assume the Super Famicom/SNES would've been a big success no matter what it was like - the overwhelming dominance of its predecessor in most territories guaranteed that - but that didn't stop Nintendo from kitting it out with a few bits of special new tech that might end up converting a good few non-believers as well. Undoubtedly the most impressive of these was its 'Mode 7' graphics which even managed to tempt me into a brief foray into Nintendoville from the long-held safety and comfort of my firmly established home in Sega Land. 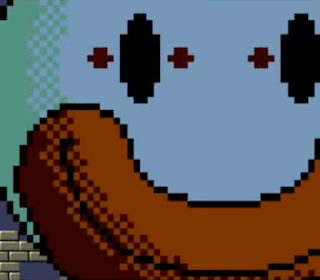 Many games featured the odd use of Mode 7 here and there, from the new system's launch right up until its demise. Often it was just used for scaley special effects as with Contra 3, Super Aleste, and Super Mario World, while a certain few other games had Mode 7 sections like the vertical stages in Axelay, several stages in the splendid Super Star Wars series, the mine-cart stage of Super Mario RPG, or the overworld areas of various RPG's, and it worked very well, but where I've focused my attention for the purposes of this post is on games that were based around Mode 7 as a whole. There were a few of these and most were racing games. This makes perfect sense of course, as the scaling abilities of Mode 7 were ideally suited to such a genre - simply draw a road in 2D, flip it over, and scroll it really fast! It seemed like a revolutionary step in home racing games but, surprisingly, it wasn't used as much as you might expect. Nonetheless, I've still enjoyed several such games, and have discovered a few previously unknown ones since starting this post as well! Here's a look at the best ones in my view, but which was your fave?

It might have been a few years since I last visited this already-infrequently visited subject here at Red Parsley but my pursuit and enjoyment of spicy food has not been diminished. Quite the opposite in fact - I'm probably more watchful than ever, always hoping to find something I haven't tried before, be that a hot curry, a new chilli sauce, or actual chillies themselves, and just recently I had some luck. 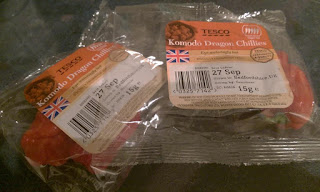 I usually check the chilli section of any supermarket I find myself in, even if it an exercise in futility, more often than not. Sometimes I'm greeted by the welcome sight of Bird's Eye chillies, occasionally I'm fortunate enough to find some Scotch Bonnets, and once I even found what I was told were Naga Viper peppers (though I now doubt this), but this has been the extent of my discoveries. Until, that is, a few months ago when I saw in my local Tesco store a small packet containing some red chillies I hadn't seen before. They were apparently called 'Komodo Dragon' chillies and their packaging warned that they were hot, but was otherwise unremarkable in any way. They didn't need to twist my arm though, so I bought two packs!

Email ThisBlogThis!Share to TwitterShare to FacebookShare to Pinterest
Labels: Other Stuff - Food / Drink 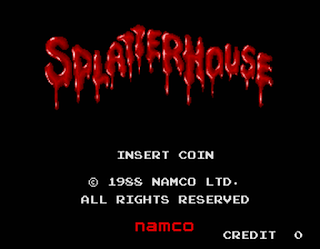 While the type of characters you'll find yourself controlling in most scrolling fighting games are varied, you can generally rely on them having some sort of background in martial arts and the games being based in urban environments, but that's definitely not the case with this Namco classic. Here you play as Rick, a parapsychology student who along with his girlfriend gets trapped in a spooky old mansion in which they had sought refuge from a storm. Naturally, she soon goes missing while he apparently winds up dead. Luckily, amongst the many treats contained within the mansion is a 'Terror Mask', said to contain the spirits of the dead, which attaches itself to Rick's newly-expired corpse. It looks like a hockey mask making Rick look more like Jason Voorhees (coincidentally I'm sure), but it also happens to resurrect him too.