As I mentioned in the last Voyager-related post, the fifth season was definitely the best so far. Having now gone through the sixth season as well, I'd say my previous assessment remains true. That isn't to say this season is bereft of greatness though, for there are lots of great moments and more than just five good episodes too. 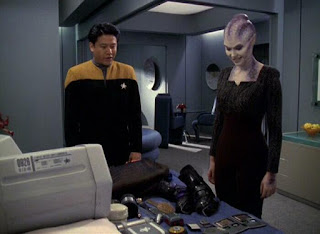 Other episodes included as varied stories as usual: some of the other drones from Seven's unimatrix turn up seeking the same independence she now enjoys, B'Elanna dies and goes to Klingon hell (temporarily of course), Tom becomes obsessed with an alien shuttle he buys to fix up, Tuvok becomes friends with Neelix after suffering brain damage, the Delta Flyer gets stuck inside a weird orange 'graviton ellipse' thing which previously swallowed a 21st century NASA command module, Seven goes crazy and turns into a conspiracy theorist, the crew bumble around in their stupid Irish holodeck town, the Doctor becomes a revered opera singer, and in one interesting episode, Chakotay, Tom, Harry, and Neelix all begin suffering from horrifying flashbacks of being engaged in a bloody battle when they return from an away mission, and before long, everyone else starts having flashbacks too!

Jeepers, just when I thought I'd finished posting selections of my favourite Speccy loading screens (see the last of the five parts here), I discover yet more evidence of the awesomeness of the retro community. This latest selection of images, you see, were all created by talented Speccy fans and posted over at the 'ZX Art' page.

I've only just discovered this superb site but it's chock-full of fantastic examples of Speccy artwork. The ones I've posted here are just a random selection of ones that caught my eye and as you can probably tell, most of them are made in the style of loading screens. Some are even 'remakes' of existing loading screens.

If you've perused these gorgeous images and like what you see, I strongly urge you to visit the ZX Art site and take a look at some of the other great work there. And just for the record, I didn't make any of these myself - the name of each artist is in brackets in the filename of each image - full credit goes to them... 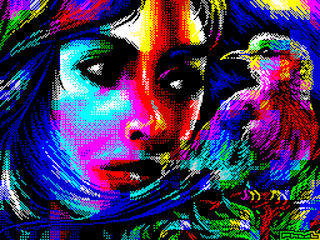 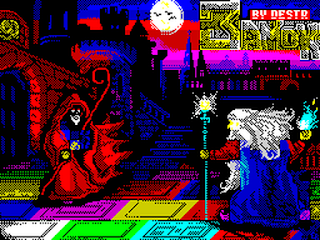