I think I've been into video games ever since I first discovered them back in the 80's thanks to OutRun, but if there was one period where I fell out of touch, it would've been around 1994-1995-ish. I still don't remember the reason for this - I don't think anything very dramatic was going on in my life at the time beyond my continuing to stew in the realisation that being an adult sucked - but whatever the reason, the result was I missed out on an important and eventful period of time. 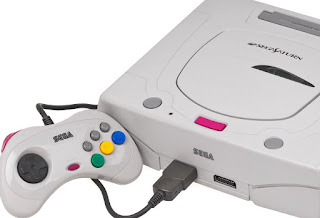 This included the demise of some wonderful systems like the Amiga and PC Engine, the introduction and equally quick failure of fancy new systems like the Jaguar and 3DO, and even the polygon-filled 3D boom. Okay, I didn't miss all this stuff completely - I was kind of aware of most of it to varying degrees so I guess I was still following things, but there was one pivotal transition I have barely any memory of - the end of the 16-bit era and the introduction of their 32-bit replacements. The MegaDrive and SNES's final year saw some flashy and innovative games which wrung every last ounce of strength out of their ageing innards before the focus was shifted to the new systems. Relative newcomer Sony had been readying their almost-Nintendo machine, the PlayStation, while Sega had finally finished pissing about with the Mega CD, 32X, Nomad, Multi-Mega, and lord knows what else, and had their system ready too.

Read more »
Posted by RetroKingSimon at 20:51 No comments:

Like many, I grew up watching the James Bond films. Roger Moore was the man in the tuxedo during my younger years but of course the Connery-era films continued to receive frequent screenings on TV as well, and I loved them all. It has been a while since I saw most of them though, so I figured it might be a decent opportunity to watch them all through again. Uncharacteristically, however, I have not started at the beginning but rather at the end, so here's a look at the four films (so far) to feature Daniel Craig's version of the world's most famous super spy! 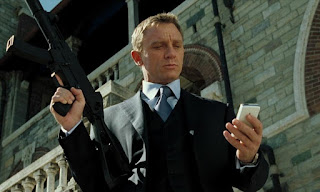 The first film for a new James Bond is always going to attract a lot of attention. Even more intriguingly in this case, it would be the first proper adaptation of Ian Flaming's first Bond novel. It begins just as Bond is earning his 00 status. Soon after, he inadvertently thwarts a dastardly plan by Le Chiffre (Mads Mikkelsen), an evil terrorist-funding banker. In an attempt to recoup his sizeable losses, Le Chiffre sets up a high stakes poker tournament - a tournament in which Bond is entered with instructions to win, or at least stop Le Chiffre from winning, with help from Mathis (Giancarlo Giannini) and CIA agent Felix Leiter (Jeffrey Wright). That doesn't mean the film is one long poker game though - we visit Uganda and Madagascar, then the Bahamas before arriving in Montenegro for the tourney, and also take in the sights of Venice too. Of course, Bond also finds time for some recreation by bedding Solange (Caterina Murino), a bad guy's wife, and Vesper Lynd (Eva Green).

Read more »
Posted by RetroKingSimon at 14:46 No comments:

I don't usually cover stuff like this here but, having missed out on many PS1 games at the time due to my fierce Sega allegiance, this latest 'mini' console release is one that I have at least a bit of interest in. It was initially announced a few weeks ago accompanied by few details. Apparently the dinky console would come with a pair of original (non analogue) controllers for two-player splendidness, and twenty original PS1 games would be loaded onto it but, no more info was forthcoming. 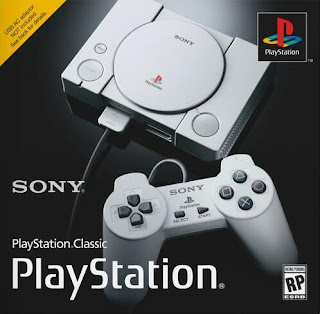 Actually, that's not true - a few of the bundled titles were divulged at the time of the announcement but a majority remained a mystery. That is, until now (tootle tootle)! Indeed, the full line-up has now been unveiled and the reaction has been... somewhat mixed. I imagine most interested parties will have compiled wish-lists in their heads over the intervening weeks and I'm no different, but I figured I'd take a look at the official selection.

This 'look' will naturally be from the perspective of someone who has never been a big Sony gamer, and certainly not a fanboy (i.e. me), so it will probably be inane drivel unfit for the eyes of even a comatose marrow farmer, but that's okay since no one visits here nowadays anyway (guffaw/cry). Nonetheless, here is a look at the lucky few titles which will be split into three sections - the games included in all regions, the games only included with the console's Western release, and the games that only the Japanese players will get, and I thought I'd follow it up with my own picks.