Deary me, I'm a bit late this year with my now-tradition look at the five films I'm most looking forward to over the coming year. So late, in fact, that one of them is already out (only just though, and I still haven't seen it) - oops! Well anyway, it's looking like a pretty good year, especially for comic/superhero fans with two DC efforts and three from Marvel. Will the DCEU finally be able to make up some ground on the relentless Marvel leviathan? There are also a few good (looking) sequels, remakes, and even some all-original films on the way. It should be an entertaining year for film fans anyway, with a lot to choose from. These are probably the five I'm most looking forward to seeing. What are your choices?
5. Alien Covenant (May) 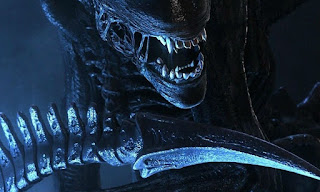 The franchise remains a treasured one for many but the Alien series been through the wringer a bit over the years. It's still only the first two films that are really good isn't it? I rather liked Prometheus too, personally, but many didn't so I imagine this sequel may well be approached with caution by them. I'm looking forward to it though, especially as it sees Ridley Scott's return to the series for the first time since the original, waaay back in 1979. It looks quite similar to that classic too, except it mostly takes place on terra firma: brave explorer finds room full of eggs, face-hugger says good morning, alien bursts out of chest, many others get picked off one-by-one, etc. I can't imagine too many were expecting much else though, and as long as it's done well I'm confident it will be spiffing. (see official trailer here)
Read more »
Posted by RetroKingSimon at 15:53 2 comments:

I've been writing and posting here at Red Parsley for a long time now - about seven years in fact. A lot more has happened in this seven years than most of the seven years that preceded them, mainly on account of being married which has been my 'relationship status' for eight years now. My wife struggles to tolerate my interest in gaming, even when it doesn't involve the expense of buying all the latest consoles and games, most of which I have very limited interest in. It was, however, rather ironically my wife who suggested I start this blog.

I can't even remember why now - it can't have been because I bored her with game talk or hogged the TV playing all my old classics - it's very unlikely I would've gotten away with that! Oh well, whatever made her suggest it, I did indeed start this very blog all the way back in 2010. I doubt she expected it to last very long; I'm not sure I did either to be honest - I've got a history of getting really into something only to lose interest just as quickly - but here I am still going all this time later.
Read more »
Posted by RetroKingSimon at 14:18 4 comments: