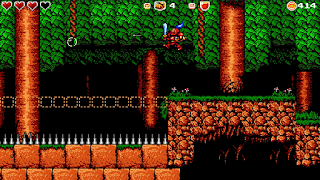 A few years ago I saw a new indie game featured somewhere which caught my eye. A small amount of investigation revealed it was an NES-inspired arcade adventure called Cathedral and was soon to be released on PC via Steam and the like. Further news, however, was not forthcoming, and then, a game that should not have been forgotten was lost. History became legend. Legend became myth. And for three and a half years, the game﻿ passed out of all knowledge. But lo, by the will of some craft, whether fair or foul, I recently found myself mournfully recalling this game and decided to look it up once again, only to find that it not only still exists but is soon to be released!

Read more »
Posted by RetroKingSimon at 17:24 No comments:

I don't usually warble on about new games I've bought here, partly because most of them are just retro-flavoured indie download titles from Steam or Good Old Games these days, but I've decided I will do with my PS4 purchases. This is mainly because I like the PS4 and the support it is receiving from many indie developers, and having physical copies of the games in question makes me feel warm and fuzzy too. 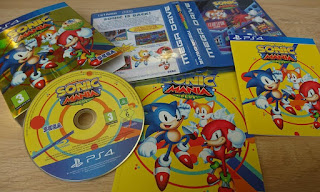 In typical Red Parsley fashion, I've got a bit of catching up to do as I already have 12 or 13 games, but I thought I'd start with this one which arrived from Amazon today. I think I'm right in saying it's the first game I've ever pre-ordered in my life too. I've bought loads of titles on the days of their launch over the years but I never really felt compelled to actually pre-order any. I have been very keen to play Sonic Mania though, and resisted the temptation of buying it on Steam in the hopes that a physical copy might be released for... well, something I own. And since I accidentally ended up with a PS4, it seemed like the best candidate. Much to my delight, shortly afterward I found out that this was indeed destined to happen. Not only that but it was to be a special version called Sonic Mania Plus too!

There aren't too many speedboat-based games around so a good few MegaDrive owners took an interest in this one leading up to its early-90's release. Sadly, however, it didn't fare too well with reviewers of the time and has barely been mentioned by anyone since. It popped back in my head recently while watching Dexter though (he takes his boat to Bimini at one point which is apparently a district of the Bahamas), so I thought it would be an opportune time to feature it here. But did it deserve such... apathy? Well, I had a quick go a couple of years ago and I thought it was dreadful, but playing it again now, in more detail this time, it's actually not that bad. The backstory certainly makes it seem promising - we're in real Miami Vice territory here. I'm not sure if the Hawaiian shirt-clad protagonist is a cop actually, but there's plenty of chasing bad guys and secret hideaways and all that.

Read more »
Posted by RetroKingSimon at 17:18 No comments:

By jingo, here's a post I never expected to be writing! Those who know me will know of my general disdain for modern gaming, especially the so-called 'consoles' which barely even are consoles these days, requiring an astounding amount of 'updating' and other such nonsense. Trying to play a game on one is even more ridiculous with sometimes hours of downloading, patches, updates, and installations required to get them running. Then of course you find that a ton of stuff has been left out, most likely on purpose to make future 'updates' seem worthwhile, and that half of the stuff that is there has to be bought separately!

Good heavens above, it drives me up the wall but many seem to lap it up - gaming is probably more popular today than ever before so I'm certainly in the minority (what else is new!). That doesn't alter the fact that, with the exception of the hyper-splendid (and ever-expanding) world of indie games, I have pretty much completely failed to embrace any new system since the mighty Dreamcast. I did get a PlayStation 3 quite late on, but that was primarily for its Blu-Ray and later Netflix abilities which have together accounted for probably around 95% of its use, but I had no plans whatsoever to get a PS4 or Xbone. I already had virtually no interest in them but I had also heard from Facebook friends that they were supposedly even worse than their predecessors in terms of all the faffing about (updates, etc).