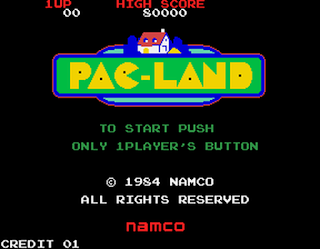 My many regular visits to the local beachside arcades I was fortunate enough to live close to during my youth yielded many delights but one game I always looked forward to was Pac-Land, the first game to star the yellow muncher since his curious mutation, perhaps the result of exposure to radiation of some sort, which bestowed upon him a brand new set of limbs the likes of which most of us take for granted. Thanks to these limbs he is apparently able to finally escape the confines of the endless mazes that comprised his earlier games. What's the first thing you would do in his position? That's right - go for a run and test out those gangly protrusions! Unfortunately for him, however, those pesky ghosts have also found a way to liberate themselves and set out in hot pursuit, aiming to spitefully ruin Pac-Man's fun.

Most things I post here at Red Parsley will only be of interest to a small number of people, but even with that in mind the subject of this particular post really will be of limited appeal. For the tiny core of people with the right combination of interests, however, it will be a truly wondrous post worthy of wine, women and song!

Before we get to that, let me just say, I've been a fan of They Might Be Giants for many years now - nearly 30 years in fact, ever since an old friend made me a tape of their first two albums back in our school days (don't worry - I bought the originals soon afterwards) - and they've pretty much been my favourite band ever since.

Yes, I know in more recent years they've made several educational albums for the kiddies, but their 'proper' albums are still among the few music albums I actually look forward to the release of these days (for yes indeed, they are still going strong). One of their most popular albums remains Flood released in 1990 which contains 'Birdhouse in your Soul', still probably their best known song.

Read more »
Posted by RetroKingSimon at 14:47 No comments: 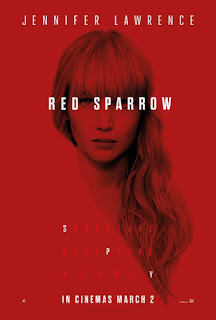 Tagline: "The road to forgiveness begins with betrayal."

It has been a while since I watched a decent spy thriller so I was looking forward to seeing this one, even more so with the usually-reliable Jennifer Lawrence in the lead role. The fact that it's based on a novel by Jason Matthews, a former CIA agent himself no less, only adds to its credentials. I guess novels don't always make the best movies but it should at least mean there's a decent story here. It has to do with 'Sparrows', the product of an SVR (formerly the KGB) programme of so-called 'sexpionage' operatives trained to seduce and gain the trust of targets with a view to exploiting them, usually by divulging compromising information or items. Lawrence is Dominika Egorova, a celebrated Russian ballerina who uses her earnings to support her ill mother. When she suffers a career-ending injury (mid-performance no less), however, it looks as though both of them are destined for destitution.

Read more »
Posted by RetroKingSimon at 18:36 No comments: