Monster Boy and the Cursed Kingdom by FDG Entertainment (2015) - PC 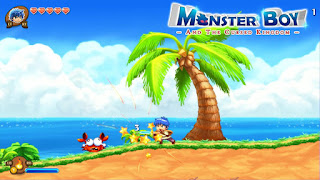 Some of you might recall a short news/preview item I posted here a while ago regarding what could end up being one of the most awesome indie games ever - Monster Boy, a kind of remake/sequel to the great Wonder Boy games of the past. And now, a tad more a year since the previous post, I found myself wondering where it had gotten to. It was due for release sometime during 2015 after all, but alas. Fearing the worst, I looked into it and found that it's merely delayed rather than cancelled. It has undergone a name change, with 'Cursed Kingdom' replacing 'Wizard of Booze' in the title, but it's very much still underway. In fact, it's looking very much like it's nearly ready... 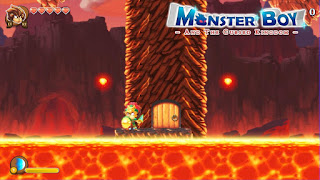 When I looked into it before, there were only a few screenshots but now we get to see much more of the game. There are many more shots as well as gameplay videos, and the game is looking wonderful! In addition to its gorgeous graphics we now get a peek at some of the various animalistic guises you will take on during the game (including some new ones - even shopkeeper piggy!), and there's a look at a boss fight too. There is even a cartoony intro and that kind of thing usually comes near the end of development so it can't be long now! It really is looking like my initial hopes will be realised - lots of old stuff, lots of new stuff, and wrapped up in glorious audio/visuals. Really can't wait for this!

Check out this awesome looking trailer for the game which does a great job of showing off the game, including stuff copied from the old games and brand new stuff as well. As before, keep up with developments at the official site here.