As you may remember, I did a round-up of Sandra Bullock films a few months back, but round-ups here at Red Parsley generally consist of five films and I accidentally watched six. I therefore had little choice to watch four more films featuring the lovely Virginian and post another round-up here! This wasn't a hardship if I'm honest - she's not exactly tough on the eyes after all (snigger!) - so behold, here's another selection of films starring or featuring this mighty appealing actress: 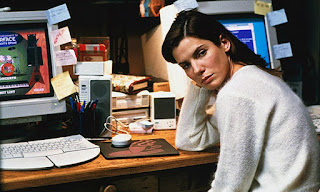 This is one of those ones I knew of in its day but never got around to watching, so this was my first time! As the name may suggest, it's a 'techno-thriller' starring Ms. Bullock as Angela Bennett who is a systems analyst who lives through her computer (yes, that was even possible in the mid-90s!). When a friend sends her a spooky hacker program, however, she thereafter finds herself targetted by a ghastly group of cyberterrorists who have stolen her identity, planted a fake one where she's a junkie hooker, and are chasing her for that magical 3.5" 'floppy' that houses such important data. Placed firmly in the 'English bad guy' role is Jeremy Northam as the main hoodlum chasing Angela (after quite literally 'pumping' her for information, obviously). Despite the understandably-outdated computery stuff though (or even partly because of it!), this was looking like a decent thriller at first. Bullock plays the out-of-her-depth-loner well as she suddenly finds herself with no home, money, or anything else, and she remains as likeable as ever in the process. Sadly, no one else stands out and the plot does go downhill somewhat in the final act, so it's left to its radiant star to just about ensure this one is still worth a watch... 6/10 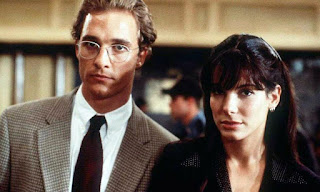 I bought this one so long ago that my DVD is in one of those snapper cases! It has been many ages since I last saw it too, and I forgot how amazing the cast is. McConaughey leads it as Jake Brigance, a young up-and-coming lawyer defending Sam Jackson after he gunned down two racist white guys who raped his daughter. Oliver Platt also stars as Brigance's friend and partner while Ms. Bullock plays Ellen Roark, a law student who just seems to turn up one day offering to help. Donald Sutherland also features as Brigance's mentor while Kiefer Sutherland is the brother of one of the dead guys and stirs up racist feelings in the town surrounding the trial. Lastly, Kevin Spacey plays the opposing, more experienced lawyer. Phew! All of them are great too, particularly McConaughey and Jackson. Bullock doesn't get much to do considering she's sharing the cover of the DVD with them but her enthusiasm for the case shines through, as does her undeniable allure. It's a cracking film for the most part too. The excellent cast is used well and the story is well-paced, tense and moving, although it is rather long and I'm still not sure how I feel about the ending. It was great to see it again though, I can't believe I left it so long... 8/10 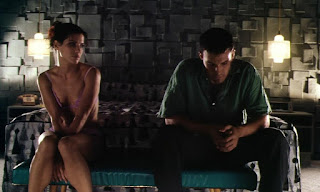 This one somehow managed to slip by me on its original release so I was watching it for the first time here. It stars Bullock opposite Ben Affleck, as Sarah and Ben, two very different people who happened to be passengers on a flight that was aborted due to a bird strike. They both need to get from New York to Georgia urgently - Sarah to stop her ex stiching her up, Ben to get married (eek!) - so they decide to travel together by land. Of course, their conflicting personalities don't mix well at first (Sarah is a free-spirited drifter while Ben is an uptight writer) and, amazingly, their trip doesn't often go super-smoothly. Through their zany adventures, however, they start to see each other's positives instead of negatives and... well, you can probably guess most of the rest. Suffice to say, it's not entirely unpredictable, nor that original (Overnight Delivery did something very similar just the previous year), and many have said the two leads don't have chemistry. They were okay for me and there are a few funny scenes but for me the biggest problem was that the film seemed to drag so much, and by the end it all seemed a bit pointless anyway... 5/10 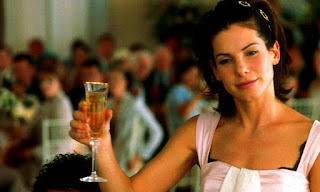 I've seen this one a few times now since it is one of my wife's faves. Happily that hasn't made me sick of it either so it must be at least pretty good, right? It stars Bullock as Gwen, an alcoholic who, along with her boyfriend (Dominic West), ruin her sister's wedding with their boozy antics. When Gwen is then arrested she gets to choose either a stretch in jail or the titular period in rehab; she chooses the latter thinking it will be a piece of cake. Naturally she doesn't think she really has a problem or belongs with the other addicts but eventually has to face reality. It sounds a little cliched and I suppose it is, but it's helped by a fantastic central performance as well as some likeable support including Viggo Mortensen, Alan Tudyk and Azura Skye as fellow patients and Steve Buscemi as the rehab facility's director. The film wasn't a favourite with most critics - I suppose it's a subject that will always be 'delicate' in film. You could argue that it isn't treated with the respect it should be, and some of the actors are rather wasted (*cough*Viggo*cough*) too, but my wife and I both enjoyed it, as you might if you don't take it too seriously... 7/10 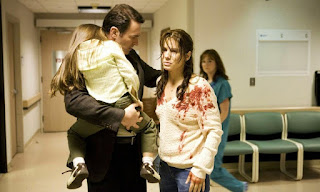 Here's another one I hadn't even heard of prior to this feature but it sounded like an intriguing one. Ms. Bullock stars as Linda, a mother and housewife in a stale marriage to Jim (Julian McMahon), but she is nonetheless startled to be told he has just died in a car accident. A morose day follows but then she is even more startled to awaken the next day to find Jim alive taking a shower - egads! Suffice to say, it takes a while before either she or we are able to work out what the frickin' frack is going on. I won't spoil it here but it turns out to be quite a floopy situation Linda has somehow ended up in, and at first the intrigue levels remain quite high, but once Linda works out what's going on, the story loses its appeal for the most part. It even renders the twist ending somewhat predictable which is disappointing as it might have been a corker otherwise. Bullock is about the best thing in what would otherwise be a forgettable film, which seems a common theme around this point in her career. Watch it if you're a big fan of Bullock and are desperate to see more of her (in which case you've probably already seen it); otherwise steer clear... 5/10